Ana Torrent and landscapes. These seem like two surefire ingredients for majestic pictorial beauty. I remember being instantly drawn to Victor Erice's The Spirit of the Beehive (1973) on the strength of its eerie DVD cover image alone: the haunted young actress frozen in the middle of a train track extending into the horizon line, challenging the camera with her probing, thousand-mile stare. An elegiac, unusual film in its own right to be sure, but what I remember most vividly from it are the expressive panoramas of Torrent in the vast landscapes of Spain, simply existing in that inherently intense, hypnotizing way of hers. My fascination led me to Carlos Saura's Cria Cuervos..., one of the most alarmingly exquisite films I've seen a long time (on the basis of how little I knew about it going in and how much I was moved coming out), one in which Torrent thoroughly ups the ante. Released three years after Spirit of the Beehive and only marking her second feature role, the film, thin on narrative details and thick on symbolism and metaphysics, is an elegy to a missed childhood, a deep-focus snapshot of a frail family tree, an angry critique of a Fascist-controlled nation, and a hopeful search for new beginnings. Its nucleus is an opulent Victorian mansion in Madrid crammed within layers of boisterous traffic and cluttered modernization, home to three young sisters living with their strict aunt and mute grandmother, a succinct juxtaposition of the old and the new, the past and the uncertain future.

The girls are on vacation, a time to play, to let thoughts wander, to get lost in fantasies, memories, and dreams, and the film itself follows suit. After a touching montage of family pictures set to a gorgeous Federico Mompou piano piece that opens the film, Saura gets right into his deft interplay of past, present, illusion, and projection. Tiptoeing down the stairs in a composition reminiscent of German Expressionism, the middle child Ana (Torrent) wanders over towards a lurid bit of middle-class melodrama where mysterious dialogue snippets protrude from behind closed doors. One gets the sense that Ana has a hunch about what they are discussing, who "they" are, and why they are making a racket in the middle of the night, but Saura leaves the audience in the dark. A light turns on in the room, emanating from the crack in the door, and a woman subsequently flees from the room in a hurry, her bra conspicuous from behind rumpled clothing. Ana and the woman make fleeting eye contact. After she leaves the house, Ana enters the room and removes an empty glass of milk from the bedside table, proceeding to wash it in the kitchen. Out of the back corner of the frame, Ana's mother (Geraldine Chaplin) casually approaches her, inquiring about why she is awake so late and then sending her off to bed. In this calmly dreamy opening sequence, Saura has subtly embedded three motifs that will be repeated throughout the film, and the most enticing part is how he leaves the notion of actuality dangling in the air. His images hit with such a visceral impact that their logical dividends can only be sorted out gradually as the film progresses.

Indeed, in a manner even more forward and direct than in Tarkovsky's Mirror, a film which shares much with Cria Cuervos, Saura lets family history dissolve along with the vagaries of time and space. Though his editing appears to induce linearity, albeit with a somewhat suggestive and uncanny chronology, the sequences in Cria Cuervos - the aforementioned included - often seamlessly blend reality with distortions of it as filtered through the distressed mind of the dark-eyed protagonist. For instance, Chaplin's offhand entrance into the kitchen belies the fact, learned only minutes later, that she is actually a ghost. The tomfoolery occurring in the closed room was actually the scene of Ana's father's death, which Ana is convinced was a product of her poisoning his milk. He, Anselmo (Héctor Alterio), was a military officer and a traitorous husband responsible for the figurative "sickness" that indirectly claimed his wife's life. This tension is explored most evocatively in a marvelous sequence late in the film that begins with the mother playing piano to Ana to put her to sleep (that Mompou again), and culminates with her sobbing in front of her husband in the entryway of their home about his insincerity and its psychological effects. Curiously, Saura shatters the perception of temporal fluidity when Ana transitions from being the flesh and bones of the scene to being the omniscient, ghostly observer, watching her deceased parents bickering across a rigid wall of time just as her mother intruded gracefully on the present moments before. 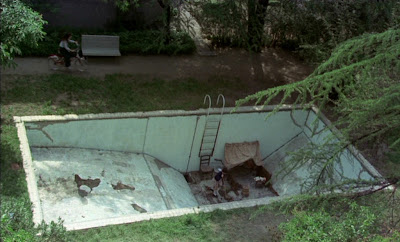 What makes Cria Cuervos so endlessly fascinating and dreamy is the fact that Saura never once makes an attempt to maintain any sort of prolonged plane of reality. The world is ever susceptible to ghosts of the past and ghosts of the present, anything warped by young Ana's morbid, heartbroken perspective. In her dreams, we witness a tender, almost erotic relationship between her and her mother, conjured as a delicate and affectionate woman whose pointy bone structure and frail features suggest years of problematic living. In one of the film's more Bergmanesque touches, Chaplin addresses the camera directly as Ana's adult incarnation, waxing about the false promise of a wondrous childhood and the many psychological wars she battled. Saura introduces this with an elegant camera move from Ana's closeup to Chaplin's embodiment, something which is instantly perceived as mother and daughter, but which soon proves to be yet another instance of various realities coexisting. Even more so, it forwardly proposes that the pains of one generation are transmitted to the next, creating perhaps an ourobouric loop of trauma. Incidentally, this deeply personal notion is inseparably linked to the political undertones nestled into the film. Cria Cuervos was produced and released at the time of General Franco's passing, marking an end to a sustained period of political oppression in Spain and the inauguration of democracy. But just as the tortured memory of her conniving military father haunts Ana and is the source of her desire to bring death upon those she dislikes (late in the film, she tries to poison her Aunt Paulina (Mónica Randall)), there is no promise of the dictatorial, fascistic impulses of the past not spilling over into the new Spain.

The film makes something of an ambiguous leap of faith in its closing minutes though. Ana wakes up to find that her attempted murder of Aunt Paulina was unsuccessful. Her sister wakes up in the throes of a violent, sadistic dream involving her parents right before she was killed. And vitally, vacation has ended, and school is back in session. The subsequent images of hordes of children hurrying into the school buildings is indicative of both restless energy and will to learn and a profound ambivalence. Is their mass education promising for the future of Spain or is it ill-fated, destined to exist under the influence of an older generation with older values? If the other events in the family household suggest averted violence and second chances, can the nation be spared the same opportunity? All of this is underlined further by the presence of the chirpy pop song by Jeanette that is repeated throughout the film, the song that Ana and her sisters improvisationally waltz to earlier on. While the jaunty rhythm and up-to-date instrumentation are typical of a modern sensibility, Jeanette's wistful lyrics about missed opportunities and a lost past do not sound so optimistic. This tantalizing irresoluteness is central to the success of Cria Cuervos, a magical film that tries desperately to celebrate the small pleasures of life but continually mines the troubling truths in the shadowy past.
Posted by Carson Lund at 7:48 PM

Great review.
I found Ana through Erice, and this film in the same way you did!

Thanks for commenting. It is quite a find, huh?

Sorry for this late, late comment...This film is amazing, I saw it first when I was a kid and it made quite an impression on me, even though I didn't understand everything at the time (not sure I do now either! :) What I remember most at the time was the music, which we had at home - and it sort of represented Spain for me (which is the country of my grandparents, who fled because of Franco...) Anyway, thanks for this beautiful comment! I think I will watch again soon...:)

No problem with the late comment, Ceci. I'm glad to see comments whenever.

I can imagine it's interesting to have a personal link to this already deeply personal film. It's embedded with so much that exudes nostalgia in an unusual way. I can't wait to see it again.

sure. Now i am very very curious about El Nido.

By the way did you check out where the title came from? I'm not sure it is mentioned in the film, since I've not watched it for some time - it's a spanish saying, "cria cuervos y te sacaran los ojos" = don't know if there is an english expression for that = breed crows, and they'll eat your brain out! I kind of love it...:)

Yeah, I did read about that title translation. I take it as a way of saying, "grow your next generation on violence and oppression and they'll fight back (peck your eyes out)". It speaks eloquently towards Ana's morbidity and sense of nostalgia.

I watched Cría Cuervos a long time ago and yes, you agree right about the translation: "Raise ravens, and they will pluck out your eyes"
I have to see the movie again because I only have the recollection of the first and second time back in the late 70ies..
and strange enough I understand this girl a lot cause my family was a very strange one.
I'm trying to make a post about this movie and it is being hard because I don't like to talk about myself.
Fortunately found your blog and can put some ramblings here. hehe
Just saw this lines at Wikipedia:

"'I don't believe in childhood paradise, or in innocence, or the natural goodness of children. I remember my childhood as a long period of time, interminable, sad, full of fear, fear of the unknown'."

It was Ana who said it.
I remember going out of the movie totally immersed and three things got my attention: when a bird dies they buries it like I did with my sister once; there were some bird feet at the refrigerator and I fount it very odd that my mother liked chicken feet (yak!); the third thing I don't remember now.
I use to have this eyes of hers, I have dark eyes...
in other words... I fear watching the movie. hahahahaha
I love Carlos Saura and watched all the movies on a time where going to the movie was a kind of experience you did to understand the world better. Or yourself...
Sometimes it was, as you said, very confusing.
When I watched Bergman's Cries and Whispers... I decided it was time to start seeing some comedies.
I went to see "Los Tres Amigos"
:)
Thank you for helping find a solution: I will not publish about Cría Cuervos today.
:)

Thanks for introducing me to this masterpiece.