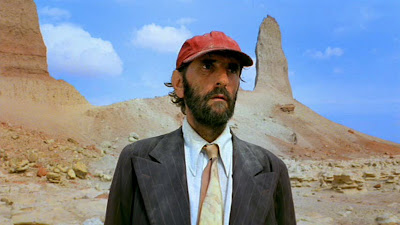 With Paris, Texas, German-born director Wim Wenders shows a knack for capturing the essence of America's heartland with more grit, honesty, and grace than most Americans can. The film, whose initial inspiration was Sam Shepard's collection of literary tidbits, Motel Chronicles, was developed in the midst of a three-month long trip to the West that Wenders took alone, photographically documenting his travels, and it distills a career-long fascination that the director has had with America. Right from its first images of a solitary figure in a baseball cap and black suit plastered against a cartoonishly vibrant desert landscape, it becomes evident that Wenders' rendering is separate from a mere pastiche of the previous practitioners of the Western - Ford, Leone, Peckinpah, Mann, Hawks. In fact, Wenders' sensibility seems to come out of left field, cultivated in an environment removed from such cultural benchmarks, the vision of an outsider looking in and ecstatically committing his sensations to the screen. The shots are moving, but they might as well be continuations of the photographic diary he kept prior to the filming. This sheer visual rapture partly accounts for the seemingly directionless, ambling mood of the opening thirty minutes, which delight in the aesthetic pleasures of the Western landscape and its archetypal qualities more than they advance any narrative.

The other reason for this dramatic stasis comes from the fact that the central character Travis (Harry Dean Stanton), the figure seen somnambulistically marching through the terrain, is about as blank and inexpressive as Wenders' narrative. He walks and walks and stares off into the distance with majestic, mournful eyes, but his reason for doing so is left unclear. Even when his middle-class, billboard-constructing brother Walt (Dean Stockwell) hears of his whereabouts and jumps at the opportunity to scoop him up, for it seems Travis has been MIA for four years, no words, no explanations, no expressions, are delivered. For whatever reason, Travis has made the decision to stop speaking, and given his near amnesiac state, it seems it was a decision made long ago. Details concerning Travis' past life and human acquaintances are collected gradually through context and incident: his brother is a well-to-do Los Angeles local with a French wife named Anne (Aurore Clément) and the couple takes care of Travis' only son Hunter (Hunter Carson, real son of L.M Kit Carson, who adapted the screenplay); he once had a lovely wife named Jane (Natassja Kinski), but unexplained symptoms procured their splitting apart; at an unexpected point in time, he escaped the reality he carved out for himself, leaving his family to believe him dead. But there's no guaranteeing Travis' presence in America is indicative of any kind of desire to reacquaint himself. Indeed, it is possible he wandered over the Mexican border unknowingly, and any suspected desire is negated when he first stoically escapes his brother's hospitality, bursting headlong back into the vast, empty desert.

Wenders niftily builds a rhythm and tone around blocks of silence, communication sent one way only for the receiving end to discredit or ignore, much like the dilapidated milieu he portrays is littered with weathered signs pointing vainly out into the great nothingness of the West. Walt speaks, Travis stares. Eventually, Travis is brought back with Walt to his home in Los Angeles, where Anne speaks and Travis stares. At one point, he finally begins speaking, muttering the words "Paris, Texas" and following it by showing Walt a photo of a vacant lot where he explains his parents likely planted the seed that began his life. When Travis' finally uses words, his communication is stunted and driven by his own internal logic; he's kind and tender, but not the best listener. Stanton's intense, iconic portrayal though makes it well known that something is eating away at Travis, a dogged determination to right his wrongs, to stitch together the family that lost its way. A deeply nostalgic scene when Travis, Walt, Anne, and Hunter sit down to view an assemblage of old Super-8 home footage confirms a retrospective warmth and comfort at the heart of Travis' life that no longer exists, but which shows a possibility of rejuvenating when the estranged father and son meet eyes longingly for an extended period of time, and soon after when they waltz down the street after Hunter's school day, imitating mannerisms from either side (one of those singular moments of cutesy compromise that often manifests itself once or twice in a Wenders movie). 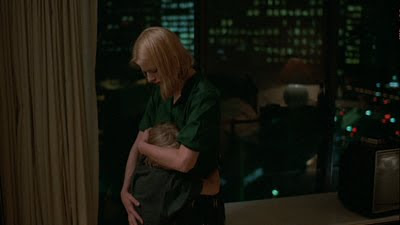 Paris, Texas eventually levels out to become an exceptionally straightforward story, that of a father and son searching for a mother, so simple and pure in its impact that it takes pictorial and geographical eyes as sharp as Wenders and cinematographer Robby Müller to capture in such an arresting manner. Travis and little Hunter travel from the hills of LA to the scrambling metropolis of San Bernadino on the strength of Anne's knowledge that Jane takes a monthly trip to the bank to add funds to an account under Hunter's name. Each locale has a specific visual stamp: the organic, luminous panoramas in the open desert, the neon and black juxtaposition of Walt and Anne's LA-overlook, and the crisp, almost hygienic compositions in the heart of San Bernadino, some of which recall Godard's treatment of the urban metropolis in Two or Three Things I Know About Her.

Wenders' potent visual intuition transforms a laconic story with sentimental undertones into a dense, prolonged (a mammoth running time of two and a half hours that goes by in a jiffy), mythic statement on the essence of the American family, a loving and optimistic but ultimately misshapen ideal. To emphasize this, Wenders has the family periodically speaking through barriers, like the walkie talkies and tape recorders that Travis and Hunter communicate with, first as playful detective devices and then as electronic mediators to deliver sad, intimate monologues, or the one-way mirror that separates Travis and Jane once he finally tracks her down working at a phone chat sex club. The latter, a probing session of long-winded dialogue courtesy of Sam Shepard, beautifully illuminates the film's gentle postmodernist undertow, with Travis' rectangular, cinematic view of Jane in the adjacent room recalling Hunter's earlier comment that the image of Jane in the home video is not his mother, but rather his mother in a movie. With Wenders calling attention to both the artifice of cinema and the fundamentally alienated nature of the central family, it's remarkable that it all manages to be so heart-wrenching anyway, and much of it is owed to Wenders nuanced visual presentation, which in one instance naturally superimposes through the one-way window the faces of Travis and Jane, hammering home their physical proximity while reminding us that it doesn't change their inability to connect.

In the end, Paris, Texas is really a film whose power derives from much more than just its director. It is a genuinely collaborative effort that features effective showings all across the board: the pristine lensing of Robby Müller (who later did similarly sumptuous landscape work with Jim Jarmusch), Sam Shepard's poetic, refined dialogue, which would stand on its own wonderfully, and Ry Cooder's inseparable slide guitar score, jangling its way through the drama like a desert wind. Of course, at the center of it all is Harry Dean Stanton's deeply expressive mug, generating emotion out of every wrinkle. His character is an unbelievably moving evocation of a self in peril, beckoned by the sensual pleasures of life but determined to remedy the people around him at his own expense, a notion constantly visualized through the breathtaking barrenness of the Western landscape, beautiful and limitless but always foreboding, teasing, and powerful enough to swallow up a man. Travis' metamorphoses is both complete and incomplete when in the final shot we see him retreating back into the darkness of the open road, connecting an ourobouric loop of dissolution and reconciliation.
Posted by Carson Lund at 6:02 PM