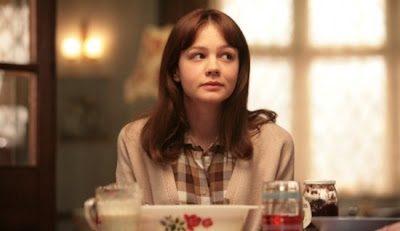 It should have been clear from the title that Danish director Lone Scherfig's An Education would be something akin to getting lectured in school. Jumping ludicrously from "school sucks" ethos to nose-in-the-books classicism, it's as if Scherfig felt her audience needed a blunt reminder of what it means to really be "educated" in life. And so the youthful, wide-eyed, and fervent 16-year-old Londoner Jenny (newcomer Carey Mulligan) becomes her instrument, the doppelganger for Lynn Barber in the memoir off of which the film is based. Scherfig and screenwriter Nick Hornby begin her as a private school whiz kid cum promising cellist yearning for greater things outside her contained, self-proclaimed dreary London existence, send her through a year-long fling with a much older, seemingly more cultivated man named David (Peter Sarsgaard), and then bring her full circle to discover she was fine where she started and where she was headed. This all occurs in a still relatively conservative post-war London that is just starting to rock back and forth, not quite swinging yet, but nearly hip enough to harbor fancy forward-thinkers like David who are above the law because it's just "who (they) are".

I write so prominently in terms of what is being done to these characters because An Education is really that manipulative, too wholeheartedly dedicated to its end result that it fails to let any air into the proceedings, some faint acknowledgment that there is more than meets the eye. The film, once it settles into its central scenario, hinges on two potential courses of action for the eager Jenny: keep studying to guarantee a prized spot "reading English" at Oxford, which has been her goal as far as she and her family can remember, or ditch school and experience life uninhibited with the freewheeling David, whose early admission that he went to school at the "University of Life and failed" should probably have been enough to jolt Jenny out of her childish wonderment. As charming and supposedly connected as David is though, he's transparently off-kilter from the first time we witness him lamely plucking Jenny out of the rain with her cello and into his car to drive her home, a drab come-on that he attributes to his love of music more than anything. From there, the hands of fate keep working their unlikely magic, guiding Jenny back into David one day when window shopping with her snickering cardboard girlfriends, at which point he makes his first offer to take her out and see a classical concert uptown. Jenny - whose laundry list of sophisticated aspirations (listening to Jazz, eating great food, smoking cigarettes) center around the oasis of Paris - is of course smitten, seeing David as her knight in shining armor who can show her everything.

It's stomach-turning to watch the machinations of their developing romance. Jenny's one-dimensional parents (Alfred Molina and Cara Seymour), such cartoonish products of English traditionalism, are unbelievably welcoming to David despite the fact that he skirts pedophile status, sending her off with little skepticism and even extending her bed time in the face of his kind demeanor. As the meetings increase, the parents grow more and more blind to his games, falling for a flimsily staged prank about his upcoming once-in-a-blue-moon visit with C.S (aka "Clive") Lewis in Paris that attracts Jenny's future-minded father. Ultimately, they allow her to spend a few days with him in Paris on the strength of the potential career connections she could make, but Scherfig settles for a stylishly abbreviated montage, failing to truly capitalize on the first-time bedazzlement of the exotic city. Instead, the emphasis is continually on the peripheral magnetism of David and Jenny's relationship, which has its own share of contrivances. As functional as Mulligan and Sarsgaard are individually, they never quite develop enough salient chemistry to warrant Jenny's full-fledged indulgence in the new lifestyle. David is actually hopelessly unromantic when it comes to intimacy, wooing her with an utterly uncomfortable but somehow passing off as tender peep at her naked bosom, and later shocking her with an even more awkward episode with a banana, and one senses that Jenny should be smart enough to see through his skin-deep charm. 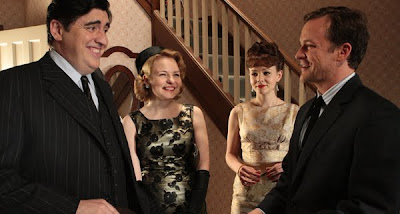 Of course, we can, and that speaks to the unflattering sense the film exudes that we are always four steps ahead of the characters, and the plot. With its scarcely placed but saccharine use of musical score, An Education bludgeons the viewer with dramatic innuendo, but Scherfig doesn't seem to realize that it's always doing a much greater job of foreshadowing than she likely intends. Therefore, the film sits uneasily in between functioning as a moralistic, told-you-so dissertation (which it unsatisfyingly proves to be in the tone-deaf final act) and an experiential first-person piece. The latter may have unearthed a more poignant film, especially given the fact that it could have rested on the shoulders of the able Carey Mulligan. If the story is insipid and by-the-numbers, Mulligan's expressive performance hints at bigger things. In the end though, her impressive spectrum of facial nuance - beginning at childish vulnerability and ending at Hepburn-like adulthood - becomes stranded within a stuffy scenario, so that her inevitable duping at the foot of David (turns out he's got a family!) is all the more devastating.

None of this is to suggest An Education is not a handsome and entirely satisfactory movie. But its problem lies right there, at its core: it does not risk anything and thus does not go anywhere particularly interesting. A few times, the doors are open to something unexpected and more emotionally complicated - David inexplicably starts using baby talk with Jenny on the eve of stealing her virginity, or Jenny confronts David's wife and son in their front yard - but Scherfig promptly closes them, afraid to investigate something outside of the confines of her pedestrian coming-of-age trajectory. Further proof in my mind that there's little worse than a small, independent work lacking the sense of spirit and singular energy such a description would suggest, instead in search of being the next "underdog" at the year-end Oscars. To translate, a superficially lively, colorful production with whiffs of cultural or historical significance and melodramatic shades of emotional urgency.
Posted by Carson Lund at 9:14 PM

I was indeed a bit disappointed at the film, seeing it had such wonderful critics (in France, at least), but I couldn't quite express why; it is certainly a very safe film...maybe too safe; I enjoyed Olivia Williams' performance as a teacher though, even if it was so small a part! (I'm a big fan of hers...:)

You're right that Williams was another strong part of the film. If Scherfig has a forte, it's her ability with actors. I though it was funny to see Williams once again cast as a proper English schoolteacher, like in Wes Anderson's Rushmore.

This is an excellent review of a film I love, so yes I disagree with much you say. It’s interesting though, how different my view of the film from most is.

I am kind of tired of defending it, but I can’t help it. You raise some good points, but I don’t think the film is really about the end and Jenny’s decision to GO to Oxford. I think it’s the opposite really, the film’s point for me is that regardless of if she decides to be like “Jenny” and go to Oxford or be like Helen and not she will have to pay some price, and it all comes down to which price she’s more willing to pay. No one is painted as a villain, and who’s to say that any are? They each have their reasons for being the way they are, Mr. Mellor is no better than David because he wants Jenny to go to Oxford.

And really, I don’t think her parents are one-dimensional, I know people just like that who’re so caught up in the lower middle class values that they jump at any chance to “improve” their children’s lives (even if it swings dangerously close to prostitution). It’s in the small moments (that need to be small before they become exaggerated) like when Jenny announces her engagement and Mrs. Mellor “Do you have to?” obviously asking if she’s pregnant. Perfectly subtle delivery and an important moment I think, she’s not as blind as she’s pretending.

I think the foreshadowing works because it’s really as if an older Jenny is telling the story.

But this is turning into too loquacious of a comment, I really do like this review I just don’t agree with it.

Thanks for commenting. I appreciate your differing point of view and your willingness to bring it up. You also raise several points here that are very well thought through, but I don't think they are justified by the film itself. I don't see the humanitarian, nonjudgmental vibe you feel coming from the film, which I see as didactic and easy. Whether or not the characters are actually multi-dimensional is negligible; it's not shown in screen.

To me, Scherfig never does anything to suggest this kind of accepting viewpoint that you mention. It always feels like a story with straightforward goals from beginning to end.

I look forward to more of your comments, and always invite differing opinion!

I was rather nonplussed by the film -- not a turkey, by any means, but nothing I'll ever watch again. Truthfully, I only picked it up on account of Carey Mulligan, who guest starred in one of the best Doctor Who episodes ever, Blink.