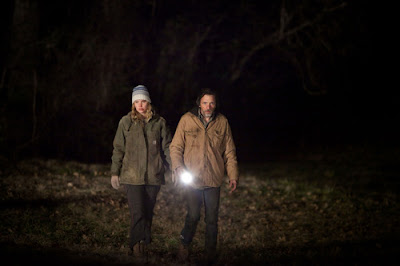 For my money, Debra Granik's Winter's Bone is the best possible way to spend approximately two hours with a horde of haggard, toothless meth cookers in a gray, dilapidated Missouri wilderness community. The most recent Sundance winner, which opened in select theaters nationwide two weeks ago, is a thoroughly riveting mystery thriller hinging around a deceptively simple premise: a daughter's search for her missing father. He, Jessup Dolly, put the family's house up for bond on meth charges and subsequently split, forcing the predicament of homelessness on his own family if he were to not show up for his impending court trial. Ree Dolly's job, initiated after staring down the town sheriff and insisting, stone-faced, that she would find him, is to weave her way through the menacing hierarchy of neighbors - some family, some friends, and some just villainous secret-keepers - in hopes of gaining insider's information about where her father is. And so it plays out as a noirish series of dangerous encounters that come one after another, each arguably getting Ree no further than where she began.

To be sure, Winter's Bone, by virtue of its bleak subject matter, chilly landscape shots, and spare bluegrass soundtrack, continues a long line of grim Americana that has been in vogue in American independent quarters for a while now (Frozen River, Snow Angels, etc.). As a result, I approached this film with a smidgen of skepticism, ready to be somewhat irritated by a melodramatically sustained air of despair and grief. But while Granik's film is indeed relentlessly dark and unforgiving, it manages this in an utterly convincing manner, forging a deep-seated sense of oppression and desperation that is inseparable with both the locale and the troubling scenario. Granik and cinematographer Michael McDonough shoot everything in a washed-out Red camera patina, which correlates well with the ideas of lost innocence, a superior past, and a murky future that loosely pervade the film, the notion of high-end gloss drained of its appealing veneer. Just as Granik and McDonough embrace a new digital technology whose longevity and reliability remains up in the air, Ree Dolly plunges into her threatening adjacent territory with her family's continued survival in question.

As much as these apparitions of past and future waft through the lackluster breeze of the Ozark woods, Winter's Bone is a film desperately pitched in the here and now. Ree, as played by a disarmingly frank Jennifer Lawrence, is a remarkably headstrong character, unwilling to allow desires or ideals get in the way of her moment-to-moment missions. Having reached her current state by being the sole caretaker of her two siblings with her mother in near comatose due likely to drug abuse, Ree realizes her search for her father is something that benefits not only her but also the young Sonny (Isaiah Stone) and Ashlee (Ashlee Thompson), two inexperienced children first seen hopping on the Dolly's ragged trampoline, their meager means of escape and youthful energy. The only glimmer of future-mindedness that Ree exposes is in her attempt to join the army based solely on the financial reward it promises. Nothing she does is guided by individual interests, and its staggering to watch Lawrence commit so wholeheartedly to the challenging role, which has her lying badly beaten on the floor of a barn one moment and being forcefully offered cocaine the next, but never being given what she needs.

Granik presents the Ozark community under a firm code of conduct that values secrecy, possession, and male dominance, the kind of inexplicable moral compass that would lead a man to stay truer to his criminal companions than he would his own family. Ree's opening credo, spoken to her siblings, that one should "never ask for what ought to be offered", really stands as a concrete virtue in these woods, one that Ree hypocritically breaks when she begins imposing herself on her neighbors, prying for information about her father that she assumes they must have. When her father's brother Teardrop (a tremendously unreadable John Hawkes), the only other immediate family member Ree has, threatens her with a choke-hold that she stop asking around about Jessup's whereabouts, it should have been proof enough that anything beyond family would be something bordering on a death wish. But an unbreakable determination guides Ree and also implants Winter's Bone's unconventionally matriarchal foundation. Despite the clearly male-dominated power structure of the community, it is ultimately the women who provide the film's gutsiest proactiveness, whether in the name of good (Ree) or bad (the nastiest, most violent figure is Dale Dickey's genuinely terrifying Merab), while the men stay shaking in their boots, providing mainly empty verbal threats or menacing stares.

It has been frequently suggested elsewhere that it is a Greek-like odyssey that infuses the film's fundamental platform of realism, that the stakes raised by Ree's mission have an almost iconic weight to them, and this is about as accurate as the implicit allusions to classical thriller and film noir conventions that are embedded in Winter's Bone. Granik's film manages to give a tough, complete portrayal of rural poverty in a neglected corner of America while simultaneously remaining an alluring, well-written suspense yarn, and it is precisely this unrelenting narrative momentum that prevents the film from reveling in, and thus exploiting the miserable lives of the inhabitants. With a nasty, brutal dramatic epiphany that clamps down as many narrative threads as it does open up more ambiguous emotional ones, Winter's Bone is the kind of film that's exciting and devastating in equal measure.
Posted by Carson Lund at 12:57 PM