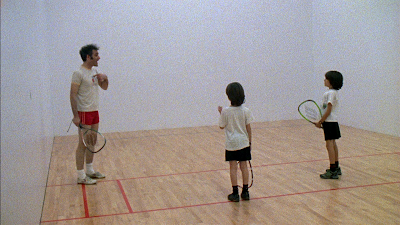 Like Noah Baumbach's The Squid and the Whale, Josh and Benny Safdie's microbudget tale of fatherhood-gone-wrong (or right, depending on whether or not you're prone to nostalgia), Daddy Longlegs, is a film that feels frozen in time. Its scrappy, no-frills presentation of New York City - a kind of distilled anytown, USA where catching a cab is as likely as getting mugged by a gun-wielding bum - is a fittingly universal backdrop for the unpredictable exploits of Lenny (Ronald Bronstein), a divorced father of two whose behavior is really as human as it is initially off-putting. Situated during the only two weeks per year that Lenny is allowed by custody to see his children, the film is a frantic, moody evocation of a man who desperately wants to make his prized two weeks count, but who is plagued by an itchy tendency to lose sight of maturity and responsibility. It opens to Lenny ordering and subsequently scoffing down half of a foot-long hot dog, then proceeding to unsuccessfully leap over a fence and mutilate his second half. Unlike the majority of busy workaday adults living in a big city however, Lenny does not trudge off like a curmudgeon mourning the loss of both cholesterol and green. Rather, he soaks up the absurdity of the moment, remaining fixed in his post-wipeout position, laughing off any residual disappointment. This is a man who seeks uninhibited pleasure in life and finds it in the immature flaunting of adolescent behavior, who feigns to swim upstream against the current of middle-aged mediocrity.

None of this is to suggest that Lenny is an instantly likable character for his "charm" or "perseverance" though. The feat of Daddy Longlegs (subtitled Go Get Some Rosemary), actually, is in its gradual transition from pity to empathy, from bemoaning the feral emotional spectrum of Lenny to understanding it and perhaps even identifying with it. As it happens, recent Boston College graduates Josh and Benny Safdie have based the character largely on memories of the disorderly father figure of their own childhood. The two grew up in Manhattan with a European father who bestowed his love of film on his children through restlessly filming home videos. In Daddy Longlegs, Lenny adopts a similar status as a film projectionist at the local theater, a job that obstructs his life with all its scheduling vagaries even as it provides his only financial and structural support. In one thrilling scene, Lenny is forced to take a shift he previously tried, without luck, to remove, at the same time as he needs to pick up his two little boys - Sage and Frey (the real life sons of Sonic Youth guitarist Lee Ranaldo) - at school. He hastily kickstarts the first reel, sprints to retrieve his children, and runs back to allow them a chance to operate the next reel (a tricky, time-sensitive maneuver that is not suitable for the wandering mind of a seven-year-old.)

A similar balancing act - between responsibility and enjoyment, seriousness and a desire to be a jovial father - is at play throughout the film. The problem is that Lenny tends to suppress the former until it's too late, when he has either argued vehemently with a school principle, found himself on a banal vacation upstate, left his kids with one of his several wayward friends, or almost lost them permanently to his ex-wife. In one of the few smacks of frightening reality in the otherwise relatively tame and comical film, Lenny force-feeds Sage and Frey a quarter of a sedative each ("a whole one can put a grown man out for days!" he insists) to keep them sleeping while he works an unexpected overnight shift, only to find them in a near coma for an indeterminate amount of time when he returns. He seems incapable of harnessing any logical foresight about whether a behavior is safe or not, and he can't seem to grasp both the fragility of childhood (later, he sends them out alone to retrieve the contents of a grocery list) or - given the fact that he is more of an extended play date than a wise father, the importance of maintaining a healthy balance of freedom and discipline. As much of an abrasive can of worms as he is though, it's clear where the Safdie's sympathies lie. They'd rather the contradictory jumble of Lenny to the stern, by-the-numbers conservatism of Sage and Frey's mother, whose presence is more often that not felt only implicitly in the muffled diegetic yammer on the other end of the telephone line provoking Lenny and grilling him for his mistakes. When she does reclaim the children later in the film, the one brief sequence inside her organized, hyper-controlled domestic environment has the formula of an army routine, with the daily customs like dinner and bedtime boiled down to an airless science. 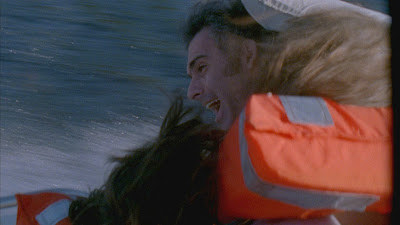 In this sense, with the Safdie's tender acceptance of Lenny's complications, Daddy Longlegs comes across with a deeply regressive, nostalgic heart at its center, a potent yearning for the pleasures of the past and a coming to terms with the confusions of the present. Ronald Bronstein, an accomplished filmmaker himself, delivers a performance of immense skill and grace, somehow expressing a buried, troubled soul beneath an otherwise madcap exterior. His Lenny may not nearly be able to handle the labyrinth of the modern world, totally and pathetically, but his triumphs and charms - like pretending to catch fish for dinner off the side of a speeding motorboat, playing old tapes in the car in the midst of a late-night traffic jam, and running through public parks with Sage and Frey - are pure products of youthful energy. The signs of wearing out are there - smoking cigarettes in a panic, getting arrested for spray painting "Dad" on a street side wall, the disorderly sprawl of graying hair - but he refuses to let them suffocate his passion. This retro warmth is reflected in the distinctive visual style of the film, an energetic stream of home-video-like images shot on grainy 16 mm, bookended by illustrated brown and yellow credit sequences reminiscent of the Charles Schulz' Peanuts cartoons.

Intermingled with the nostalgic comfort however is also suffocating camera staging that never veers away from the center of the action, suggesting there is no physical escape from the present, no retreat to the days that required less responsibility. The Sadfie's shoot everything in claustrophobic, shaky close-up, hardly ever cutting away to reveal an establishing shot. And their employment of this cinematographic tactic is not shoddy or nausea-inducing, but rather a sensitive way of heightening the immediacy of the physical world, capturing details upon details at the rate that Lenny is forced to process stimuli. Consequently, Daddy Longlegs is both a pleasant and bleak trip, a juggling of good and bad vibes. Quite refreshing, it is, to see young filmmakers with full careers ahead of them operating in such multifaceted, knowing territory with limited means and an understated visual style so appropriately unpolished.
Posted by Carson Lund at 10:11 PM