Before Sunrise (1995) A Film by Richard Linklater After sensitively probing the scattered fabric of Generation X with his seminal features Slacker (1991) and Dazed and Confused (1993), Richard Linklater moved towards a palette that was at once decidedly broader and more specific with Before Sunrise, one of the defining films of the 1990's American independent cinema. Meeting two disparate souls - a personable young American male named Jesse (Ethan Hawke) who wants to just "be a ghost for a while" and an intellectually curious French woman named Celine (Julie Delpy) - on a train in the anonymity of the European countryside, Linklater's film, while at first hearkening back to his unreleased debut It's Impossible to Learn to Plow by Reading Books (1988) due to its emphasis on public transit, seemed instantly an attempt to transcend any of his familiar measures of place and community. Jesse and Celine are characters who are out of their element, standing out as clear central figures in opposition to the homogeneous ensemble pieces Linklater has perfected throughout his career. They begin conversing over coffee, and soon enough he is asking her to get off and kill time with him in Vienna for the day before he has to catch a flight in the morning. It's a setup that prefigures a situation of almost Greek-like levels of fate and free-will, contrasting the rambling, directionless non-structure of his earlier works.

What becomes especially interesting in Before Sunrise though is not that Linklater abandons any of his former methods, but rather how effortlessly he is able to adopt a more rigid three-act structure while still maintaining his signature air of casual spontaneity. Celine eventually does get off of the train with Jesse, but unlike Linklater's own cameo performance in Slacker, she does not have any stoic skepticism about it. On account of Jesse's prophetically logical dissertation about how she would regret not getting off the train with him in a distant, romantically confused future (the first of the script's devilishly clever speeches), she feels completely at ease with his laid-back, unassuming demeanor. For the rest of the day and into the night, the two wander around Vienna discussing various topics related to life, love, death, and the innumerable gray areas in between, all captured by Linklater and cinematographer Lee Daniels' modestly roving camera, which remains as straightforward as possible so as to not interrupt their delicate interaction. Knowing that the two must separate in the morning though lends a constant mood of melancholy to the proceedings, a feeling of transience and frailty that grows deeper and deeper, devastatingly, as Jesse and Celine's relationship grows stronger.

It's a premise that is simultaneously sad and inspiring throughout, but Linklater and his two leads have an uncanny way of diverting the negative aspects of the situation until the final twenty minutes, so that what remains is entertaining, thought-provoking talk interspersed with humorous non-sequiturs that often times lead to the intellectual core of Linklater's work. For instance, at one point the two are dining at a patio cafe when Celine mistakenly makes prolonged eye contact with an elderly mystic, who takes this as an invitation for business. Receptive as always, Celine agrees to have her palm read. The mystic makes a vague enough summary of her current and future self - enough to have gathered simply from the scene of course - and concludes by making a brief statement to Jesse, which he later deems "condescending", as well as labeling the whole encounter a hokey act of opportunism. Celine, on the other hand, is taken by this small spiritual communion between two souls, moved by how such a lowly street entertainer could inspire so much mystery and seeming understanding. A scene as minute as this works to cement the fundamental differences between Celine and Jesse's worldviews: he is the rationalist, and she is the lofty, spiritual romantic (roles that would, to some extent, be reversed in the tantalizing sequel, Before Sunset (2004)). Later, an encounter with a street-side poet affirms these statuses. Yet Linklater, ever attentive to the multivalence of human beings, throws in personality ripples that complicate their ostensible roles. Celine, betraying her idealistic nature, is constantly worrying about the omnipresent possibility of death (witness her possession of the George Bataille anthology The Dead Man in the opening sequence), and Jesse at one point waxes about how he feels like a child dreaming up his future life in his mind, a seemingly more reassuring, optimistic outlook. 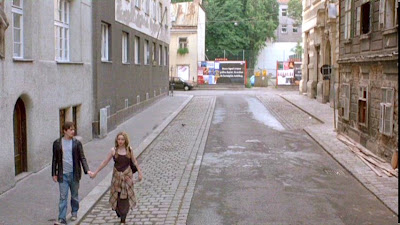 And so Jesse and Celine continue to talk, talk, and talk, and after all of this heart-to-heart, as well as the equally vital gaps of silence, a charismatic relationship forms that feels as carefully constructed as any of the best in cinema, yet it maintains a wholly authentic sense of two people living beside one another as opposed to performing. It's almost as if the script was abandoned after a while and the film simply became a documentary of Hawke and Delpy's chemistry on set, assuming such conversations very well could have occurred when a camera was not rolling. Because of this, one feels a strong artistic kinship with the films of Eric Rohmer, who was always able to capture similarly holy moments of human interaction on screen with a casual formalism that Linklater shares. Like in Slacker, Linklater appears resolute on assigning the camera an ethical dimension, using the static long take in an utterly nongratuitous manner for reasons that have less to do with aesthetic editorializing and more to do with respecting the length and fragility of his character's exchanges. Moreover, the dependency on fixed visual patterns is yet another sign of permanence, along with the classical music heard on the soundtrack and the ancient sights of Vienna that Linklater occasionally - but not superficially - revels in, that counteracts the ephemerality that ultimately drives Jesse and Celine apart in the end.

Before Sunrise is sneakily calling attention to these themes throughout, without ever overshadowing the dialogue that is its central purpose. The images of trains, tracks, and blurring landscapes in the beginning and end of the film come to signify the race of time and the fleeting tragedies it creates. The sound of the tracks can be heard, implicitly, in the whole film, to be sure, but most presciently during the final moments of Jesse and Celine's time together, as they contemplate what the best possible solution is to their spiritual dilemma. Should they stay in Vienna and forget their lives at home temporarily? For just one more night, or for months? Or is it worth strengthening the relationship only to lose it later in a cruel, loveless world? Can they even go home and forget it ever happened? As the trains load their passengers, Jesse and Celine reach a consensus that is in some way a middle ground, but still it is stuffed with impracticality and snap judgments. Then Linklater makes a curiously poignant move not unlike the one made by Antonioni in L'Eclisse, yet infused with a remarkable Ozu-like tenderness, cutting back to the several locations the two spent time at over the course of their stay in Vienna. It is clear here, in this fond farewell (but not quite goodbye), that this is a precious film about places and people, about permanence and impermanence.
Posted by Carson Lund at 7:16 PM