Greenberg (2010) A Film by Noah Baumbach

Noah Baumbach's latest film Greenberg is a witty, dawdling work that manages to illuminate both the best and worst features of the director's abilities. Unsurprisingly, it's rife with deadpan one-liners lodged within long strokes of naturalistic dialogue, and has a modest visual style that works accordingly. Conversely, it's also desperately one-note, cynical, and hopeless in its tone, taking the rather petulant, ungrateful titular character (Ben Stiller) and placing him within a context from which there is no upward escape (he verbally commits to "doing nothing for a while"). Adding to Baumbach's repertoire of distinct location shooting, Roger Greenberg has drifted into Los Angeles for an indeterminate amount of time to house-sit for his brother (Chris Messina), who is on vacation in Vietnam. There is a running, though never officially verified narrative detail about Greenberg having just been let out of a mental institution. His reason for entering is, perhaps intentionally, never clarified in the script. He's a terminal crab, and it becomes clear that any logical root of his anxiety is negligible; this is a man who will grow bitter even when there's nothing to grow bitter at, who will look sullen when all around him is sunny and pleasant.

Baumbach does not begin the film on Greenberg though. Instead, in a sweeping pan of the Los Angeles horizon line, his camera spots a woman walking the Greenberg family's dog in the hills, and she becomes the focal point for the first 15 minutes. Her name is Florence Marr, and she works as a personal assistant to the Greenberg family, thus naturally being granted the privilege of taxiing Roger around Los Angeles when he needs (having lived in New York City for years, he has lost all courage to get behind the wheel, though he does wisely assert the ability late in the film after snorting a line of coke). Greta Gerwig - of Hannah Takes the Stairs recognition - plays Florence, and herein lies Baumbach's unique attempt to meld mumblecore stylistics with a dedramatized Hollywood heavyweight in Ben Stiller. One could say that Baumbach's been towing this line throughout his career, but in Greenberg it seems a particularly conscious decision, especially given Mark Duplass' invariable appearance as a jerky old band-mate. This works to further isolate the film's prosaic qualities from any sense of formulaic gloss, a testament to how little interest it has in delivering anything close to rousing emotional epiphanies. The closest the film gets to such a maneuver is when the camera tilts above the distraught Greenberg to reveal a massive human blow-up waving erratically in the wind in the parking lot of a car dealership, a revelation that is, ironically, more humorous than it is inspirational.

When the film eventually does introduce Roger Greenberg, only the back of his head is seen looking out the window at the backyard pool in his brother's LA crash pad while on the phone with Florence. A couple of beats later he is in another room peering out the window again. Subtly the film establishes this motif to suggest that Greenberg is internally trapped, capable of only passively staring at the external. He's a man who has remained locked within himself even as the years have passed and others have changed, and has a severe inability to self-correct. This is witnessed in the variety of old friends he encounters over the course of his stay in Los Angeles. After college, Greenberg was in a successful hair band that turned down a promising record deal, and years later he reunites with both Duplass' character and a kinder, more charming deadbeat, Ivan Schrank (Rhys Ifans). Ivan inertly goes along with Greenberg's annoying neuroses in the name of friendly reconciliation, but continually winds up empty in return. All Greenberg does is complain when Ivan takes him to a backyard party filled with children and parents, where Baumbach intercuts between several different instances of his pathetic small talk to heighten the embarrassment. Their discord reaches its apex in the film's prolonged centerpiece, when Ivan finally takes a rather timid stand for himself at a drugged-out twentysomething party in the Greenberg home. No less awkward are Greenberg's meetings with his old girlfriend Beth (Jennifer Jason Leigh), who uncomfortably tries to deflect his halfhearted stabs at romantic revival. 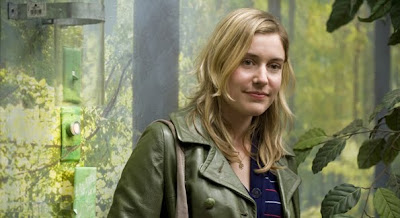 Greenberg's overarching thrust though is the precarious relationship of Roger and Florence, which springs into being haphazardly when he goes down on her after five minutes of shared beer drinking. The scene instantly earns its place in the canon of bad cinematic sex, attributable as it is to Baumbach's own enduring breed of clumsily de-eroticized sexploitation. Florence reactively apologizes for her ugly bra, then thinks out loud when she questions whether or not the sound she heard was a train. The moment ends with the same lack of emphasis it started with, but it nonetheless effectively frames the two as instantly connected in their own idiosyncrasies. Although there exists a significant age gap (Greenberg is in his forties and Florence is in her mid twenties), it is practically set in stone that these two will be indebted to one another in some way for the remainder of the film, no matter how wavering that connection is. And indeed it continues in flux, he being resolute in his confusion, she being casually impressed by his skill of modestly doing nothing. Like the filmmaking traditions Stiller and Gerwig originate from, it seems perilously unlikely that Roger and Florence will ever achieve a harmonious connection, instead occupying a hazy middle ground that is as nuanced in its awkwardness as the cinema of Noah Baumbach. Their one area of mutuality is in the family dog, Mahler, for whom they regularly convene at the veterinarian hospital, himself being a kind of distillation of the direction of Roger and Florence's relationship (when his health is relieved towards the end, a faint hint of improvement comes for them too).

The difficulty with writing about a film like Greenberg is that it is in some way a betrayal of my own instincts. As a casual viewer, this is actually a film I very much enjoy, yet as a critic, the film's flaws present themselves more clearly. There is no doubting that Baumbach is an extremely adept chronicler of the everyday lives of upper-middle class white people, and that he extracts the absolute best performances out of his actors. Stiller is a devastatingly believable Roger Greenberg, abandoning any outward displays of comic bravado to focus his attention more on droll antagonism, the humor of which only sneaks pathetically through the cracks, and Gerwig gives the finest performance yet of her young career, finding for once an actual cohesiveness in her weird tics. But at some point it would be interesting and indeed a sign of maturation if Baumbach could transcend his own niche, which currently displays a rather narrow worldview. It can be grating to see him concentrate so microscopically on ungrateful people who shouldn't really have the fussy abnormalities that they do, while in the process appearing invisible to the plight of others such as the under-the-radar foreign minions who work around the clock at the Greenberg house and are simply relegated to the background. Yes, Greenberg is a well-crafted, acutely observed film, but it can also come across like the sound of Baumbach walking into a wall one too many times.
Posted by Carson Lund at 6:46 PM