The Sheltering Sky (1990) A Film by Bernardo Bertolucci 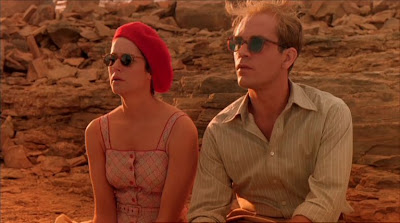 (Disclaimer: This is an essay I wrote for a class I take called Exoticism in Literature and Art. It was not a critical piece per se, and thus limited me to speaking on rather objective terms. Though I do hold many of the points in my essay to be true and indeed effective in the film, I also refrained from criticizing areas that truly needed criticism. This is far from Bernardo Bertolucci's best film.)

Bernardo Bertolucci’s The Sheltering Sky is a film that deliberately pulls a well-mounted rug out from under you to immerse you in vast uncertainty, to confront you with the true indifference of the natural world. Based off of Paul Bowles’ acclaimed novel of the same name, the film tells the brooding tale of a pair of long-time lovers – Port and Kit Moresby, played by John Malkovich and Debra Winger, respectively – who venture out of their familiar New York City home to the Sahara Desert to lead a traveling life of exoticism and unpredictability from which they plan not to return. Deep down the film is also a study of an estranged marriage and the ways in which the empty, forbidding landscape provides an exotic channel through which Port and Kit can evaluate their own fundamental differences.

Bertolucci divides the film into two dissonant sections, mirroring the structure of Bowles’ novel. Both parts utilize sharply contrasting cinematic techniques, a method which first produces audience comprehension but eventually turns to anarchic confusion. The initial half is essentially a conventionalized translation of the personalities that the book gradually establishes; Port is a self-assured, humorless intellectual with an existentialist worldview, Kit is an artless, well-meaning lover prone to superstitious beliefs, and the pair’s tagalong, George Tunner, is a shallow, personable aristocrat interested in the romantic foibles of Port and Kit. A sharper eye than that of the book is spent documenting their interrelations, creating the notion that these are people that can be understood, albeit with some difficulty, whereas the book tends to wallow in strong relational ambiguity. Perhaps wisely, Bowles rarely attempts to mine the complicated depths of what is left unsaid; Bertolucci and his cinematographer Vittorio Storaro apply visual indicators that serve to assist interpretation, like deep red and blue color filters. 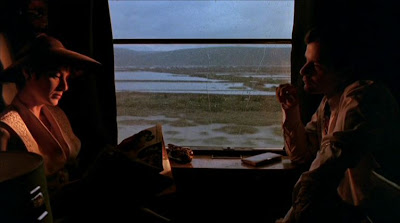 The emphasis throughout the first half is on dialogue and exposition, much like a Hollywood film. There are moments of tension as well as lighter filler scenes, and discerning which is which is all made helpful by the inclusion of Ryuichi Sakamoto’s mournful score, which only really underscores the scenes when Port and Kit are having serious conversations about the state of their marriage. Bertolucci’s camera stays at a traditional distance to his characters, employing an even dose of medium shots and close-ups. All of this manages to communicate a cinematic language that is familiar to Western moviegoers, a language that gives them what they expect regarding narrative flow, character development, and visual style. Though the plot moves at a relatively calculated pace, the audience comes to foresee a climax and eventually a typical conclusion involving the state of Port, Kit, and Tunner. Then, as in the book, Port suddenly dies of a Typhoid illness that quickly weakens him. In an instant, the film itself feels exotic. How could the main character die so early in the story? What does that mean for the rest of the characters? What does that mean for the film? Bertolucci lets these questions linger without an answer until by the end they are no longer important. Kit is finally alone in an unusual land, finally unguarded against the elements. Having each other earlier was what provided a barrier to really being immersed in the new culture they were entering. Once Kit finds herself without a crutch, there is no protection from what surrounds her; everything is unfamiliar, and superstition cannot solve her husband’s unanticipated death.

If Bertolucci’s classical mise-en-scene felt ill suited to the existential undercurrents in the first half, it was because he was saving all of his vast panoramic shots for the second. Close-ups become few and far between. Finally the camera captures both the land and the sky that is so crucial to the title as well as the thematic content of the story, dwarfing humans against it to suggest their triviality on a grand scale. In a film about the gulf between the existentialist tenets of Port – the idea that humans are without guidance from higher powers, that their actions alone dictate who they become – and the hopeful mysticism of Kit, these kinds of distant, contemplative shots are necessary both to allow for audience interpretation and to recognize the unavoidable, physical fact of nature that is constantly playing a role in either. Amidst the intense solitude and sorrow of the second half, they primarily work to propose that Kit is, much to her dismay, without assistance. 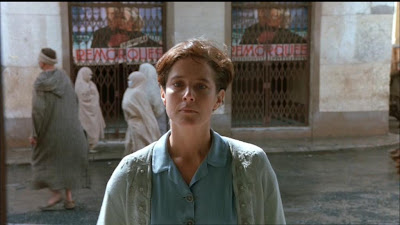 Once she is alone, the narrative loses a large portion of what made it feel traditional in the first place. She finds herself drifting aimlessly through the Sahara and is eventually taken under the wing of a small Arab group riding on camelback, becoming one man’s concubine. At the same rate of Kit’s transformation from an American traveler to another covered-up member of the tribe, the film eschews its sense of narrative control until eventually it seems as if Bertolucci is no longer directing the action onscreen. Instead, in long scenes depicting Kit’s wanderings through the small desert villages that the group takes rests at, the visual and aural cacophony of her surroundings seems to dictate what exactly the camera is doing. Vittorio Storaro never shot any documentaries early in his career, but in The Sheltering Sky’s latter half one begins to wonder if he did, because the film gains a sturdy element of verisimilitude, as if it’s an ethnographic video.

Unlike in a Hollywood film, Kit - who up until this point is one of the major characters and is frequently onscreen in close-up – blurs in with the other bodies that swarm around her. Because she has finally adopted the clothing of the Arabs, often times it is unclear where she is, and the film’s densely layered diegetic sound further obscures her presence. The Arab people chant and drum relentlessly for what feels like an entire thirty minutes, and clamoring voices – mainly in native tongue, but also in Kit’s shifts between French and English – reach a level of intelligibility that differs greatly from the clearly audible conversations occurring earlier. Bertolucci doesn’t even include subtitles in every instance, and when he does they appear to merely confirm how trivial the words actually are. Verbal language no longer holds importance, ruling out the means through which Kit has communicated throughout the film, as well as through which most conformist art conveys its messages.

That The Sheltering Sky is able to utterly abandon its initial sense of order is crucial to its success as a practice in exoticism. The very chaos it eventually embraces is in itself exotic to Western audiences. It also helps to amplify the film’s fundamental philosophy of existentialism and its acute atmosphere of disconnection and incomprehension; the level of detachment we feel from the characters matches that which they feel from each other. Bertolucci wisely realizes the ability for the cinematic medium, as opposed to literature and theater, to create these distinct moods.
Posted by Carson Lund at 9:33 AM

It's funny, the other I day I put up a review, which of course waits in the wing to be illustrated, but I put up a review of De Sica's Two Women wherein I put a similar disclaimer. I figured as long as I have to write a review of a film for class, I might as well kill two birds with one stone.

“The Sheltering Sky” by Bernardo Bertolucci (based on Paul Bowles’ novel) depicts the spiritual voyage of a young and intelligent American couple in Northern Africa – with a hope to rejuvenate their love for each other. Life in a country of hunting for achievements and success made their ability for psychological intimacy as thin as a wallet without banknotes. During their trip they encounter various people – enigmatic, trivial, “dangerous” or frighteningly real, until their “pilgrimage” ends in a tragedy. The husband’s death transforms the wife/widow’s life from being a frivolous and vain intellectual into becoming a secularly spiritual person dedicated to lonely contemplation about life (according to the literary canon of Paul Bowles playing himself in the film). Port (John Malkovich) and Kit’s (Debra Winger) emotional togetherness (feelings for each other, intonations, pantomimes of mutuality, points of agreements and conflict) is elaborated by director and actors with the exactitude of a musical score we, viewers have to transform into the music of emotions. Actors’ psychological subtlety added to characters’ sophistication – creates an overwhelming spectacle of personal relations with its elegiac and dissonant moments. To see the film – the human emotions and reactions contained by the limitless African landscapes – is a unique and unforgettable viewing experience. Please, visit: www.actingoutpolitics.com to read an article about Bertolucci’s “The Sheltering Sky” – “Spirituality of Loss as a Step Towards Spirituality of Being” (with analysis of clip and shots from the film), and also essays about the films of Godard, Resnais, Bergman, Kurosawa, Bunuel, Bresson, Pasolini, Antonioni, Cavani, Alain Tanner, Fassbinder, Maurice Pialat, Herzog, Rossellini, Wim Wenders, Moshe Mizrahi and Ronald Neame.
By Victor Enyutin

Best Information you shared can you write on Heathrow airport cheap parking.