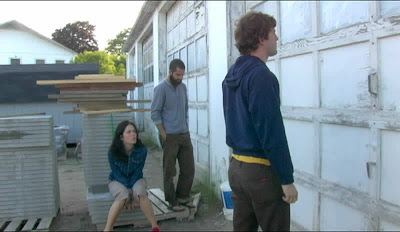 Mark and Jay Duplass' mumblecore road movie The Puffy Chair is in many ways one of the previous decade's defining works, a film that modestly possesses a large portion of the features that make contemporary American media so accessible and democratized. Shot on an absurdly shoestring budget with prosumer digital cameras, it tells a story that we've all heard before: a couple in a long-term relationship - Josh (Mark Duplass) and Emily (Katie Aselton) - hit the road with Josh's neo-hippie brother Rhett (Rhett Wilkins) and experience a great deal of emotional ups and downs. What's special about the film though is not the banal story, but rather the method by which it is presented and the immense psychological ambiguity and verisimilitude it maintains. This is a film in which the gap between the characters presented and their actor counterparts is virtually negligible, where the trials and tribulations shown on screen are in most cases occurring in life as well. For instance, Mark Duplass and Kathryn Aselton were indeed a couple outside of the film as well and are now married. Duplass has also been a struggling musician and booking agent. In this sense, The Puffy Chair is a substantially self-effacing, and many would say, self-absorbed creation, but it's one that does not try to conceal these qualities.

Some of these descriptions, as well as the fact that it regularly employs improvisational dialogue, align The Puffy Chair and other mumblecore films with American independent film movements of the past. The elusive dividing line between fiction and documentary has always been a staple in the works of John Cassavetes, Lionel Rogosin, and Hal Ashby, and the Duplass brothers, along with Joe Swanberg, Andrew Bujalski, and Aaron Katz, appear to have followed in their wake, even if it did not blossom from a direct inspiration. An ethic has carried over, a desire to present life in all of its contradictions with the least editorial intrusion possible. And if The Puffy Chair does anything right, it's in its willingness to not flinch away when faced with the painfully nebulous challenge of human interaction, to not sugarcoat or simplify complex emotions. Witness the very first scene: Josh and Emily are having dinner at Josh's apartment speaking in silly infantile voices about how much they love each other. Suddenly, Josh brings up a certain "trip" that he's taking and the two revert back to their normal manners of speaking, indicating an uncomfortable level of tension not fully camouflaged by the syrupy facade. Something lies beneath their exchange, some unspoken modus operandi that Josh has about not taking Emily on the trip with him. Further complicating this is Emily's subsequent regression back to the baby talk for her teasing delivery of the line, "you're going to be so miserable without me". The difficulty to detect the interior mindsets that guide outward expression thus becomes one of the film's primary thematic thrusts, presenting a treacherous pitfall in Emily and Josh's relationship.

Josh's trip is a cross-country endeavor to pick up a maroon lazyboy recliner that is the exact replica of the one from his childhood home for his dad's upcoming birthday, a gesture designed at first for a much-needed reconnection, but which turns out to be more about his own urge to feel accomplished and meet a deadline. After Emily bursts out of his house when he takes an immature phone call for a moment too long at dinner, Josh finally gives in the following morning when he stands outside her window blasting Death Cab for Cutie from a radio, begging her to come along with him. The scene is clearly an offhand allusion to Cameron Crowe's quintessential rom-com Say Anything (1989), and as in many modern indie films, it comes with an ironic detachment: by acknowledging this film, the Duplass brothers are positioning themselves firmly outside of it. It's a nod to all of the well-groomed platitudes of the classic romantic structure, and a forewarning of The Puffy Chair's desire to subvert them. Words and hammy gestures prove to only peripherally soften the blow as Josh and Emily's fundamental romantic dissonance makes itself more and more evident throughout the road trip. She's hugely idealistic, taking every advantage to muse on the spiritual commitment that is marriage, and he's an emotional mute, incapable of expressing his feelings smoothly or in a timely manner. Towards the end, after the trio has, with much difficulty, acquired the puffy chair, there is a disarmingly empty emotional silence nearly as strong as anything in Bergman, yet it is routinely deflated by Rhett's goofy acknowledgment of it as "bad mojo". 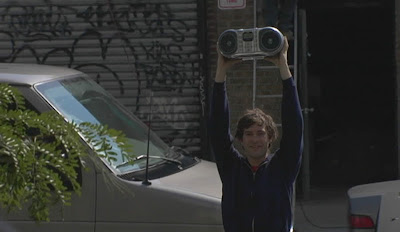 Although the three main characters in the film are to some degree types - the boyfriend, the girlfriend, and the comedic tag-along - the Duplass brothers allow them to be unpredictable and morally double-edged so that there's no clear-cut answer as to whose actions were most noble. Though Rhett is established loosely as a spaced-out half-brain, illustrated hilariously in his first appearance onscreen making a video of a lizard licking liquid off of leaves with a digital camera that he ponders giving to his dad for his birthday, he eventually proves to be the film's primary voice of reason when the remaining manner of discourse has turned to silence. Even having spontaneously wedded a trailer-park girl he sees at a movie theater only to part ways the following morning, Rhett manages to muster up some words of wisdom, no matter how obtuse. Furthermore, one cannot quite pinpoint who's to blame for Josh and Emily's relationship going down the tubes. If he seems blatantly immature and uncommunicative, she is needy and insinuating to the extreme. The Duplass Brothers let these conflicts simmer with supreme naturalism, never allowing an overarching agenda like a plot dictate the prickly ebbs and flows of communication.

Though The Puffy Chair works well as a verite character study, its most salient lesson ultimately has little to do with the characters or themes present in the film. It has more to do with the approach, which stands as the antithesis of Hollywood film production. A scrappy DIY work that makes the most of the simplest of resources available to consumer culture (a van, a digital camera, a few China balls, and an Ebay page, which is where Josh locates the puffy chair), the film achieves what was once only a fantasy to the average citizen: making a feature-length movie. The modern technological age has offered innumerable options that allow original visions to proliferate outside of the constraints of big-budget cinema, a manner of working that is accessible, instantaneous, and cheap. An entire world can be reflected on camera quickly and without a laborious attempt to artificially reproduce reality, and given the film's tight network of real-life friends and lovers, one can directly experience a sense of life in motion, with little deterrence from that sloppy, jittery camera.
Posted by Carson Lund at 10:49 AM