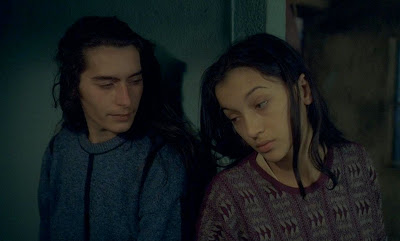 Pedro Costa's first look at the lives of Cape Verdean immigrants in the Fontainhas slum is also his first pronounced gesture towards a kind of fiction/documentary hybrid, a representation of real lives in real settings with the logistics of a narrative production. In short, a breathtaking work poised peculiarly in between authenticity and artifice, reality and hyperreality, logic and illogic. Assembled in a deeply elliptical fashion out of extensive blocks of self-contained moments, Ossos chronicles the routine struggles of a battered community over the course of what appears to be a few weeks. Within its first 15 minutes, a young woman named Tina (Mariya Lipkina) has threatened to gas herself and her newborn child in the confines of her own decrepit living room, and the inscrutable father has subsequently taken the baby away to the city for bartering. And Costa reveals these occurrences with such an economy and forthrightness that they fly by without being fully comprehended. A lack of storytelling aptitude is not what's at play here (Costa has no interest in the conventional workings of plot) but rather an early instance of such extreme immersion in the concrete that it surpasses easy encapsulation. The two individual shots that detail these events - the first a low static shot and the second a brisk horizontal tracking shot invariably interrupted by roaring traffic heading upstream - are utterly devoid of traditional exposition, leaving the viewer to connect the dots as to what occurred before the frame and what extended beyond it, both temporally and spatially. In each instance Costa eschews the explanatory essence entirely. One may be tempted to ask questions like "does she follow through with her grim setup?" or "where is he taking the baby in the bag?", but perhaps the more fundamental, unsettling question is "why is there gas or a bag in the first place?"

But the film keeps marching forward without any interest in tying these loose ends, only fractionally resolving the uneasy question marks scenes later when we see Tina still submitting to her daily grind and the father restlessly pacing around town looking for someone to either feed his child or buy it. Costa presents nothing beyond the physical presence of the characters onscreen, refusing to analyze their often contradictory behaviors, like swapping from hasty selfishness to tenderness or suicidal impulses to a calm moment of mutual laughter in a matter of moments. And his non-actors are certainly fascinating enigmas in their own right, with their mere corporeality superseding our understanding of them as living, breathing humans. In this regard, the figure who stimulates most frequently is more or less the central character Clotilde, the cleaning lady and close friend of Tina played by Costa regular Vanda Duarte. Clotilde's first appearance onscreen in the second shot of the film is utterly hypnotizing as she trudges down a set of stairs in the morning to haphazardly turn on a pot to boil then smoke a cigarette in front of the stove. Costa confidently sets her up in a long posed close-up, drawing attention to both her profoundly vacant stare and her peculiar, rather androgynous physical features: a pointy, angular bone structure, a faint mustache, and a long, greasy head of hair like that of a Native American tribe leader. She also moves with icy deliberation, completing each stone-serious gesture like the strictest of Bressonian archetypes.

Duarte's apathetic death stare introduces one of Ossos' central motifs of extended painterly close-ups that border on static portraiture. It even proves to be the chief leisure activity of the Fontainhas inhabitants, who have literally come to a standstill in their private moments. When no longer working, these people stop motionless and simply stare blankly, for there is nothing else to do. They cannot focus their eyes on an object, for there is nothing to look at. They do not look forward or backward, because their lives appear to have little progressive or regressive movement. They are locked in the oppressive present, perpetually sucking on cigarette butts, which look more damaging here than ever. Costa's unblinking camera frames them from a respectful medium distance in their evocative silence, a pictorial space gently composed with the look of a muted pastel painting, serviced tremendously by Emmanuel Machuel's stark rendering of deep shadow and neutral hues (after all, he worked harmoniously with Bresson too). These long closeups will often exist as scenes unto themselves, devoid of any surrounding context, a curiosity that is augmented when seemingly irrelevant peripheral players are the subjects. For instance, Zita Duarte (Vanda's sister, who actually dominates the first shot of the film) and Clotilde Montron both play haunting onlookers with no impact on the proceedings, particularly providing impassive stares from adjacent rooms in an arbitrary community dance scene somewhat reminiscent of the bar dance in Bela Tarr's Satantango. More interestingly, with the former's haggard slenderness and the latter's robust softness, they suggest doppelgangers of Clotilde and Tina, ghosts of meta import perhaps. It would be disingenuous to say that nothing is going on during the many moments of seeming emptiness though, because Costa's aural representation of offscreen space is as dense as it is prescient, foreshadowing with equal potency the spaces that are later visually documented. Families are heard bickering in the alleyways near and far, doors are shutting, children are moving to and fro, and dogs are barking in the distance, a stunningly layered sound design that puts into question the level of artificiality. Are the diegetic sounds heard beyond the frame the quotidian reverberations of an unknowing slum populace, or have they been carefully manipulated? Costa preserves this tension between documentary and fiction as compellingly as he vacillates between the broader strokes of a faint narrative and the micro snippets of inconsequential routines. In the city, the father is taken in for temporary care by a compassionate nurse named Eduarda (Isabel Ruth) from the hospital that the ill baby is given to, and Clotilde also begins cleaning for her. Later, Eduarda visits Fontainhas and sleeps with Clotilde's husband (Miguel Sermão) while the two are intoxicated, completing a breaking down of the walls between the poverty-stricken lower class and the equally drifting middle class. Though Eduarda's behaviors tend to come across rather impulsive, she is ultimately redeemed when she nurses Tina back to complacency after another misguided suicide attempt, just as the father continues to comfort and feed his baby after abandoning it. In spite of their weaknesses, these are characters with a concrete sense of dignity and a residual tenderness even in the midst of all their struggles.

Ossos is one of the shining achievements in recent world cinema, so sure of its own scope while remaining decidedly mysterious, a pure force of nature that does little to illuminate in distinct terms yet stuns in ineffable ways regardless. Costa's visual and sonic instincts are remarkable; as a pictorialist with paramount emphasis on drawn-out, fixed takes, he stands among the finest in cinema, capturing the gritty erosion of the slum with a sensuous poise that turns the ugly into the evocative. Though Ossos is the most "cinematic" of the Fontainhas films, no less alarming is the emotional authenticity, no cheaper are the rhythms of life. Operating under its own inexplicable internal logic with a formal dedication to match Robert Bresson, the film is presumably Costa's final foray into film before his further attempts at intimacy in the digital works In Vanda's Room and Colossal Youth.
Posted by Carson Lund at 7:03 PM