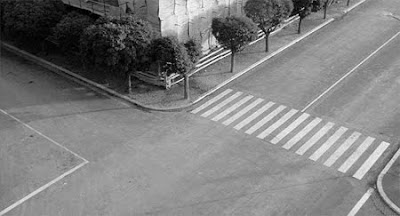 I have a troubling relationship with Michelangelo Antonioni's loose early 60's trilogy (the other two being L'Avventura (1960) and La Notte (1961)), because it seems that just about every time the films become so achingly beautiful that I'm in awe, Antonioni does something that achieves little more than bland fulfillment of the conventions of alienation that were in vogue in the art cinema of the time. L'Eclisse represents the apogee of this divide, with sequences that are among the most sublime Antonioni ever committed to film and others, like an endlessly prolonged stock market diversion or the moments when Monica Vitti can't utter anything but the words "I don't know", that are irritating beyond belief. Throughout these works, one senses that Antonioni was building up a personal stamp in the public's eyes, one that dealt with longeurs of wordlessness and blunt acknowledgments of the kind of dwarfing effect that modernity has on the individual, and, either consciously or subconsciously, he was factoring in what was expected of him. Thus, there are times when Antonioni is just being Antonioni, lounging in his signatures without necessarily always servicing the work. I find L'Eclisse to be the most accomplished of the three films though despite the transparency of these shout-outs to himself, because when it shines, it really shines.

It goes without saying, but the film is about the difficulty of making lasting emotional connections in an increasingly modernized milieu, and it stars Antonioni's muse Monica Vitti as the romantically, even spiritually confused bella. The first scene of L'Eclisse is actually the middle of a scene, one in which Antonioni does not supply the supposedly essential parts. We experience the feeling of dropping in on an uncomfortable tension between two lovers - Vitti's Vittoria and Francisco Rabal's Riccardo, a smug, corporate type - as it is perceived that Vittoria has in the very near past made a declaration of closure to Riccardo. The silence that pervades the moments with the adult couple shying awkwardly away from each other in a confined apartment space, a polar opposite of the chatty remoteness occurring in a similar scene between Michel Piccoli and Brigitte Bardot in Godard's Contempt, is an immediate predictor of the film's relentless quietude, not just sonically but psychologically. Even in the most boisterous stretches, there is a blankness of mind, a murkiness, a general inability to externalize internal feelings. Vitti may invariably laugh, smile, and dance, such as in an uncharacteristic throwaway visual gag where she paints herself black and has a Kenyan pow-wow with her best friend's colonialist neighbor, but she is never resolutely happy.

About halfway through, L'Eclisse seems to incidentally pick up what becomes its primary plot point, just as L'Avventura unexpectedly transitions from a mystery regarding a lost woman to a timid romance between the two who are dispassionately searching for her. It's important to mention however that a "primary plot point" to Antonioni is just an excuse to explore a theme, and any semblance of story is democratized amongst the other aspects that make up the film. After literally drifting around for an extended period of time after leaving Riccardo, she begins to develop an enigmatic romance with a stockbroker working for her mother (Lilla Brignone) named Piero (Alain Delon). Their interactions begin as fragmented and uncertain; although Piero's attraction is bluntly clear, Vittoria has a habit of turning away from him at all possible costs, though never fully abandoning his company for fear of losing all hope in human connection. Eventually, she has difficulty holding back her attraction, and they grow more flirtatious, even engaging in a few outbreaks of unrestrained jostling with one another. Yet, to emphasize the fundamental distance between them, which can be uncannily felt through through their more mechanized movements, Antonioni, in one of his more leaden uses of visual symbolism, composes them kissing from opposites sides of a glass window. The suggestion is that attraction can exist merely on a superficial level, and as long as there are barriers to put up (the stock market and glass windows, both creations of man), people will forever be doomed to stand on either side, prohibiting them from real physical and emotional contact. 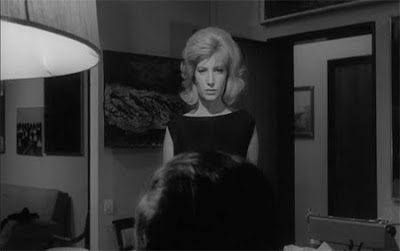 Vittoria's romantic liaisons are foregrounded against the materialistic concerns of urban life. To be more accurate, L'Eclisse is set in what looks like a newly renovated metropolitan area, with vast expanses of construction work within a hilly landscape. There is a driving contrast that the film establishes between the natural and the unnatural or man-made, evident in both the physical landscape as well as the emotional landscape between the sensual, searching Vittoria and the money-hungry Piero. Several instances powerfully illustrate this, such as Vittoria's aimless walks, shot in successions of wide panoramas. Antonioni also extracts the synthetic beauty out of the environment through Vittoria's heedless curiosity; one particularly stunning moment shows her standing motionless before a row of metal pillars clanking in the soft wind. However, there are also times when he brazenly overstates the world's mechanization, and this is precisely what I mean when I say Antonioni's just being Antonioni. The sequences at the stock market are intolerably long and banal, simplistically implying that to experience it for long enough is to truly understand its shallowness. Unfortunately, this comes across right away, and we are left to wallow in a clamor of writhing men in suits, screaming out numbers and plotting their next moves behind gargantuan pillars. Furthermore, the rather absurd, Tati-esque tone of the scenes muddles the intent, attempting to make something that should be dry and mathematical into an almost slapstick romp.

The absence of Vitti's character for a great portion of the stock market scenes is typical of L'Eclisse's propensity to completely strand its main characters and plot line. It's also an augur for the film's notoriously mysterious conclusion, which, after creating the expectation that Vittoria and Piero will meet the next morning in their usual spot, instead becomes an extended piece of visual poetry documenting their absence from the street corner where they first kiss timidly. At this point, the overbearing presence of the locations takes total precedence over the people occupying them, eclipsing them, if you will. Antonioni's aloof camera makes the mundane seem alien, luxuriating in a piece of driftwood floating in a bucket of water, the textures of the skin of a random passersby, or a long, empty street. Droning soundscapes accompany the images, creating what feels more like a sci-fi than a romance. I can't think of a more entrancing way to conclude this lonely, elegiac film, and it almost singlehandedly makes up for the more eye-rolling formalities.
Posted by Carson Lund at 6:16 PM

I love this film, I agree that it's the highlight of his trilogy, if not his career. I really like Antonioni's decision to go with Alain Delon, not only is he suave, but always seems to exude innocence with a hint of something up his sleeve, which is different from the suave that Mastroianni is. Antonioni's shots are beautiful in such an unusual way; they seem to show a landscape while being in the middle of it, he seems to put open subjects in closed shots, if that makes sense.

Sorry I havent commented on many of these lately, been busy, but sure do keep up with the postings nonetheless.

I like your analysis of the choice of Delon. I agree that he's a high point of the film, for he has a refreshing degree of charisma when placed aside the condescending Riccardo (and I get this just out of seeing him onscreen for about 15 minutes).

As for Antonioni's framing, I don't know specifically what you mean, but I can agree that he has a very uncanny compositional sense. There is a nebulous quality to it that is hard to articulate.

No worries about the commenting. Understandable. Thanks for reading.