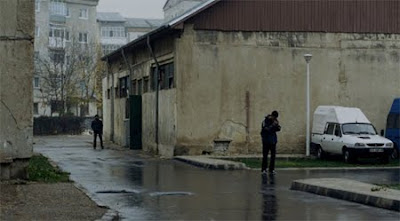 Corneliu Porumboiu's Police Adjective is strikingly similar in style to both Christian Mungiu's 4 Months, 3 Weeks, 2 Days (2007) and Christi Puiu's The Death of Mr. Lazarescu (2005), a triad of Romanian films distributed in the United States which embody the heart and soul of what is being deemed a Romanian New Wave. The grossly overused term - which, since the renowned French New Wave from the 1960's, has been uttered nearly every time a country that most people have never heard of unexpectedly shows some faint cinematic pulse - is actually quite adequate here given the homogeneity that is all of a sudden present in this artistically ambitious batch of works. In the years prior to these films, Romania's cinematic output was bland under a Totalitarian state, and the current works adopt a harshly critical tone against this once-prevailing political framework, the remains of which have given Romania a grayish bureaucratic patina, an inevitable vibe for a slowly recovering nation. The films literally reflect this stasis. Comprised of long, mundane blocks of time, they painstakingly document real-life situations rather than construct contrived plot lines. It has an Italian Neorealism ring to it, but such films had a greater sense of immediacy, exploring urgent social problems, whereas the Romanian films have broader questions to ask. In fact, there's a sense that these films could go unseen, and nothing would change (that is, if we want to believe that cinema can cause social change in the first place).

There are two ways to consume this work, and they are not mutually exclusive, but in some instances can be. One is to endure them, to watch them with an undiscriminating, objective eye, and by the end simply shrug your shoulders. Ok, that's it. It's difficult to think of a movement of films that are so uniformly nondescript, so hopelessly matter-of-fact and earthbound. One might argue that an Argentinean filmmaker like Lisandro Alonso is another in this breed, but truthfully there's always a mysterious undertone to his work, something potentially symbolic or metaphysical, but the Romanian films have no interest in flowery associations. They sit on the ground and stay there, refusing to stand up and jump or even kick their feet for that matter. The other way to watch the films is critically, with one eye on the material and the other on the larger context it's taking place in, to stay in tune with the subtle links to the societal flaws that are pertinent both directly to Romania and indirectly to the rest of the world. In The Death of Mr. Lazarescu, we get so locked in to the physical moments of the film that we may not fully notice and dissect the scathing critique of the health system that it is. This is how the two viewing apparatuses are sometimes separated, and in this way the Romanian films can incidentally work against themselves.

Poromboiu's film is the first of the three to hinge itself most substantially around an issue that is not necessarily specific to Romania, but an issue of ethics and morality that is identified with mankind. It follows a recently married undercover cop named Cristi (Dragos Bucur) who is investigating a group of high school students who are lacing their cigarettes with THC, a proponent of marijuana that is illegal in Romania but acceptable in several other parts of Europe. He observes the suspects from afar, outside of school and on the street, subsequently recording his day's observations on a document for his supervisor. At night he goes home to have dinner with his wife Anca (Irina Saulescu), who is a schoolteacher and a fan of innocuous Romanian pop songs. She brings up the fact that their relationship is not working, but Cristi brusquely turns the conversation into something unrelated. The film is relentlessly focused on the minutiae of all of these routines, and is so effective in its attenuated pacing that it occasionally tips over into tedium. Yet we subtly accumulate knowledge about Cristi's pragmatic, skeptical demeanor and gain a comprehensive understanding of the behavioral tics that inform the set pieces later in the film, which are basically petty, but paradoxically profound, linguistic debates. 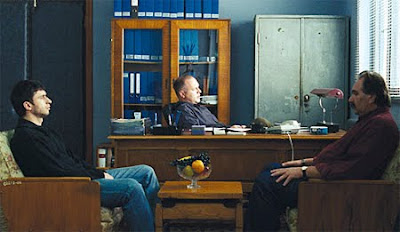 The first of these unadorned, drolly staged knockouts is also the first time we view Anca and Cristi together at night. It is a remarkably protracted scene in which Cristi eats dinner alone at the table while Anca listens repeatedly to a boisterous "I Don't Leave You Love" by Mirabela Dauer in the adjacent living room. Cristi asks his wife to turn the music down to no avail, then ends up sitting in the living room with her and arguing about the use of empty symbolism in the song like "What would the sea be without the sun?" Anca takes the banally evocative lyrics for what they are while Cristi tries to analyze them, finding only a dead end which has no practical application in terms of real relationships. This finicky, judgmental ear for nonsense is indicative of Cristi's overall stance in life, his lucid approach to language, behavior, and morality. He begins to have qualms about arresting the students because of how minor the offense is, how unfair the punishment is, and how soon Romania will be legalizing the very substance which would put them in jail. More broadly, Cristi does not comprehend the indirect usage of language through figurative devices, which extends to his disinterest in allowing language to dictate society.

This, however, is precisely what the climactic scene of the film proves, that the ways in which we process and understand life all comes down to words, and that the "official" words are the ones that oppress the individual. Police, Adjective's most widely discussed scene - and for good reason, given the fact that it successfully elucidates all of the film's themes and even spotlights some new ones that were only vaguely implicit throughout - is when Cristi approaches his boss about the fact that he doesn't think the kids should be punished for their slightly inadvisable acts. He informs the boss that his conscience told him that making an arrest would be against his morals because of the drug's impending legalization. This leads to an excruciatingly long-held static take that watches the boss fire words at Cristi, intending for him to look them up in the dictionary and read them aloud. The neutral definitions end up proving Cristi wrong and validating the boss's thesis that nothing is above the law, and it is the job of the policeman to honor the laws put in place for society. Poromboiu, ever aware of the hypocrisies of bureaucracies, realizes that this statement has yet another unacknowledged layer: this is indeed the same mindset that lead to and helped sustain the Totalitarian state of the past, as well as the countless oppressive societies in the history of the world. It seems you can't retreat from the dualities of language after all.
Posted by Carson Lund at 11:20 AM

Interesting. I ought to see some of those films, but it seems that they are not available on Region 1 DVD. How do you suggest I can see some?

I suggest you contact me via email and I'll transfer you any of the above mentioned RO movies (or others, if I have them) no problem.
Simple as that.:)