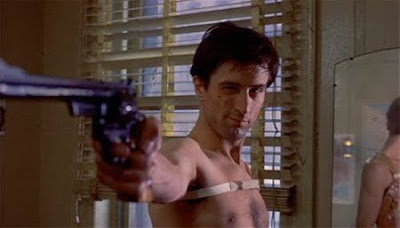 During a protracted scene of dialogue late in Martin Scorsese's Taxi Driver, a twelve year-old prostitute named Iris (a blossoming Jodie Foster) referred to in the pimp world as "Easy" says to Travis Bickle (Robert De Niro), the stir-crazy misfit at the center of the film: "I dunno who's weirder, you or me". It's a casual one-off delivered by Foster with the kind of finesse that would suggest it as no more or less important than the rest of the conversation, but it rings with the kind of ambiguous moral inquiry that underscores the entire film. Scorsese's landmark 1970's film is not so much caught up in providing answers or condemning social issues as it is in thrusting the viewer inside the mind of a disturbed individual who, in combating the thing, becomes the thing itself. Bickle, a lonely, self-serious, aggressively moralizing figure, thinks he has it all understood: the New York City in which he cruises with his taxi is rife with corruption, "scum" as he routinely dubs it, and it needs to be swept away. He has no intended solution to this problem other than to simplistically "get rid of it", and Scorsese watches from a respectable, devastating distance as Bickle's one-track mind negotiates the need to purify the urban environment while it rots away without assistance.

Bickle is one of the most radically ambiguous anti-heroes that Scorsese has ever filmed, and it would be safe to extend this statement to include him in the entire scope of American cinema as well. His stance as a morally questionable vigilante who rebels against an almost post-apocalyptic milieu of urban angst looms large over the ensuing timeline of American films that take this type of figure as their signpost for dark, serious subject matter: Tyler Durden in Fight Club, to name one, is loaded with Bickle-isms. Part of the reason why he is such a fascinating character is because of the juggling act that is on display between his seemingly astute and well-intentioned dismissal of what he sees as the city's corruption and the psychopathic bloodlust that he embraces to defeat it. It becomes especially difficult to stand by Bickle's side when we witness how impulsive and rash he is when he does not get his way. A radiant love interest named Betsy (Cybill Shepherd) avoids him after he foolishly takes her to an adult film as a date, and in doing so Bickle nearly attacks her violently. Though he's been through the war as a Marine and will humbly take any job, he's really a child in a man's body who has a burning desire to eliminate all the obstacles that make life slightly less endurable.

The distorted lens through which Bickle views his surrounding city requires Scorsese to present his favorite setting in the bleakest possible manner, a fever dream of indecipherable sources of neon, wet side-streets lined with junkies and prostitutes, and bland apartment interiors. Much of what Bickle sees is from his taxi, and thus this landscape is usually shown from a voyeuristic perspective, glimpsed through windows and often abstracted by reflections of street lights. Several of these montages have been immortalized in film history, such as the scene that opens the film, with a taxi emerging portentously in slow motion from a cloud of manhole smoke, succeeded by Bickle's famous narration about the scum which envelops him. Set to Bernard Herrmann's final score, a dreamy lounge jazz mix of synthesizers and saxophone, these scenes are rightfully remembered for the beautifully foreboding snippets that they are, pointing subtly but surely towards the tragic bloodbath climax. The uncertainty that accompanies them also carries over into Bickle's ordinary activities, such as meeting up with his fellow cabbies at a diner or ogling Betsy from the street at her workplace. As always, Scorsese's cinematic technique is utterly in synch with the psychological and dramatic imports onscreen, emphatically whip panning, tracking, or zooming when called for. He even finds menace in a moment when Bickle is drinking a seltzer water, the camera ominously gliding towards the bubbling liquid with an enhanced sonic accompaniment, something of a condensed version of the coffee cup scene in Godard's Two or Three Things I Know About Her. 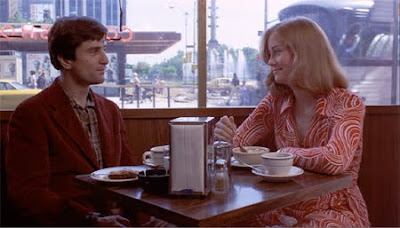 In fact, Taxi Driver is fundamentally informed by diverse cinematic sensibilities, and in a way becomes a hodgepodge of all of the direct as well as invoked collaborators on the work. Consider the fertile merging of the European and the American; the film presents a nihilistic loner not unlike a Dostoevsky figure within a distinctly American political and social context. Its mirroring of the turbulent racial and sexual tension that existed in the mid-70's is acutely realized, and can be witnessed in Bickle's conspicuous bigotry towards the African American street-dwellers (who work both as continuations of the Vietnamese he antagonized during the war, with the final scene being a chilling echo of the My Lai Massacre, and reflections of the still-prevalent racism of the time, even after the passing of Civil Rights Acts) and the gulf between the openly sexual mindset that leads the trench-coaters to attend porn theaters and the more prudish outlook of a character like Betsy. This distillation of reality is extended by the decision to present New York City in the midst of an exciting voting season, with a heavyweight candidate named Palantine, a loose fictional representation of Ronald Reagan, being an anchor around whom much of the story's action occurs. So if the guts of this film are American, contextually and cinematically (the grandiose sweep of major Hollywood directors like John Ford and Alfred Hitchcock guides the proceedings - after all, Scorsese is a firm devotee of classic Hollywood cinema - and even Kubrick's The Shining is recalled in the ironically sedate conclusion), then it is sprinkled with fascinating doses of European arthouse furnishings. Bresson, specifically a la Pickpocket, is felt in the film's emotional distance and use of diary narration as a formal narrative device, and German Expressionism makes its mark on Scorsese's florid visual style, with Fritz Lang's M being a particularly fitting precursor given its general thematic thrust of ethical decisions in the face of an outsider.

The Bresson influence is actually especially substantial because Taxi Driver's screenwriter, Paul Schrader, is an enthusiastic worshipper of the French director's work. He provides the introduction to Criterion's Pickpocket release, and one point he makes seems particularly relevant to his effort with Scorsese. Schrader glows about Pickpocket's achievement of transcendence, which he attributes to the utter absence of direct emotionality in the film with the exception of its closing moments. With Herrmann's score, Scorsese's blackly comic touches, and the spontaneous charisma of Robert De Niro (the widely quoted "are you talkin' to me" scene is a result of improvisation), Taxi Driver is far from the austere terrain of Bresson, but there is still a noticeable stride away from the Hollywood tradition of always keeping the audience emotionally invested in and knowledgeable of the character's motivations. Thus, the film's ambiguous final scene, which comes off as too saccharine by half, approaches a similar level of emotional reward, albeit not a completely understood one. I find this bittersweet ending, which is refreshingly indeterministic, to be the clincher of the film's success, and it is largely the reason why I respect the film more than I did after a first viewing. It gives us both violent destruction and perfect fantasia, and although one might occur in a post-mortal realm, who's to say it matters?
Posted by Carson Lund at 12:19 PM