Krzysztof Kieslowski is a director who loves to devote a series of projects to a common theme, films that allegedly represent, or comment on, long-held ideals, like the Ten Commandments for instance. Such is again the case with his Three Colors trilogy, a set of works designed to reflect the motivations behind the three colors of the French flag. What’s interesting is how tenuous the connections are that he makes to the given ideal he is working with. It is never glaringly obvious what value his film is supposed to be illuminating; instead, Kieslowski’s films always tell rich stories of everyday occurrences which open up - through his gently poetic eye - into dense parables covering a range of existential topics, in the sense that they are such fundamental human questions that coincide with the entire thrust of life. Blue is a typically moving, immaculate work centered on the idea of a woman’s choice to either embrace a new life or continue to bitterly reject it, and this basic conceit ostensibly riffs on the notion of individual liberty.

Yet it is also a film about trauma, grief, cynicism, sensuality, love, recovery, and the elusiveness of truth. Kieslowski gives equal weight to all of these themes, and has something sophisticated and unique to say about each. Warranting equal praise is the radiant Juliette Binoche, who subtly breathes tangible life into these ineffable qualities through a range of distinctive facial expressions and gestures. She plays Julie Courcy, a woman who loses her husband and young daughter in one of the earliest scenes of the film in an unexplainable car crash in the middle of the French countryside. Miraculously, Julie survives the accident only to come out of a coma and discover her family is dead. She is immediately disillusioned, unable to come to terms with the sudden loss of what is most dear to her. The only family she has left is her bemused mother (Emmanuelle Riva) who sits in a nursing home all day with her eyes glued to the TV watching images of people tightrope walking and bungee jumping, a clear symbolic parallel to Julie’s own life, teetering on the edge of total neglect to the point where she is nothing more than a blank figure. Her partly blind mother claims to be able to see the whole world in the TV, an ironic counterpoint to Julie’s own temporary immunity to life’s pleasures.

Julie’s husband was one of the world’s most distinguished symphony composers, so his death is not only a private tragedy but also a public one. Images of him and Julie flood the media, and this ubiquity does not alleviate Julie’s grief, especially when journalists begin questioning her against her will about the rumors that she was actually the real composer of most of his work. Julie strives to become a non-presence after resurrecting a long stagnate attraction to a neighbor named Olivier (Benoît Régent), only augmenting her sorrow after sleeping with him. She empties out her home and relocates to the middle of Paris, deliberately not informing anyone she knows about her decision in an attempt to free herself from all connections to the world, be it material or psychological, and immerse herself in anonymity. Kieslowski materializes this deep grief with a series of quiet, morose scenes that are light on dialogue but heavy on expressive close-ups. One specifically effective scene has Julie sitting at her piano for the last time, lethargically playing one of her husband's compositions with one hand. The camera cuts back and forth between softly focused tracking shots across the written music and shots of Binoche's barren visage, set to a creepy piercing piano. The scene culminates with Julie slowly sliding her hand down the piano top until it crashes down violently, the final time she expects to personally commit her husband's work to audible music. 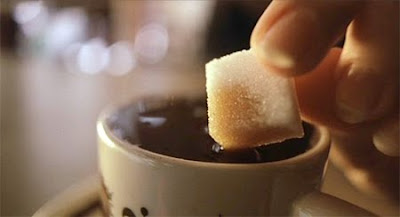 It is not, however, the last time she hears the music, for she finds that it repeatedly reverberates in her head during late-night swims at an ethereally electric blue pool. Being able to hear the voluptuous symphonic movements, replete with flutes, violins, and piano, gradually assuages Julie back into an admiration of the sensuous textures of life. The sweeping music also coincides with her reacquired love for small surface pleasures such as the taste of coffee (Kieslowski watches a sugar cube become slowly consumed by liquid), her family's blue jewels that she hangs from her living room, and the warm, irresistible urge for human companionship (she gains a friendship with an emotionally feral stripper living in her apartment complex). Julie even learns a shattering truth about her husband that she did not know before his death, but she does not grow bitter. It is significant that at the height of this re-emergence, Julie dives into the pool and floats in a fetal position for an extended moment, as if she's truly being reborn. She successfully completes her grieving state, although the potent sense of melancholy remains through the very last frame of the film.

Blue, like The Double Life of Véronique, is an aesthetic revelation, a fusion of sight and sound that is flawlessly immersive. Kieslowski is a master of evoking inner states purely through cryptic visuals, subtle transformations of light, and shocking editing rhythms. As usual, he works with cinematographer Slawomir Idziak, who seems to always adopt his languorous visual storytelling style effortlessly, lighting the sets and actors in a way that is perpetually attuned to the natural changes in light over the course of a day, yet is also somehow vaguely unnatural. Zbigniew Preisner matches the grandiosity and intimacy of his score for Double Life, and Binoche captivates in what may be her finest and most emotionally rich performance. The humanity in Blue is also endlessly rewarding; as a story that could have become positively grim, instead it maintains an understanding of the possibility of second chances, of starting anew in life without forgetting the pleasures of the past.
Posted by Carson Lund at 1:06 PM