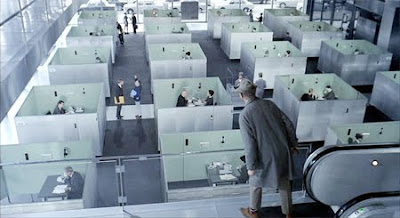 While watching Jacques Tati's exuberant 1967 film Play Time, during every shot you are confronted with an alarming decision of what to look at. Almost right after you make this choice, you are left with another feeling, a lament for what you did not get a chance to look at: damn, I should have spent more time watching the funny guy sampling the lurid desserts at the convenience store, you may think to yourself. Fortunately, this is a not a setback, for I suspect it opens up the potentiality for completely new viewing experiences each time it is watched and re-watched, a broad sampling of new mini-narratives and a chance to divert your attention to the stubby guy with the sad look on his face rather than the ostentatious American grandma. With Play Time, Tati achieved something rare in cinema: the ability to give the audience total freedom as to where the gaze wanders. It is not a commonality for individual cinematic images to be as democratized and uniformly frantic as they are in Tati's whimsical evocation of a day in the life of Paris, and the result is a monolithic work of go-for-broke art that simultaneously overloads the senses with quotidian silliness and breezes by with a perpetually light tone.

The squeaky clean polish of the film's metropolitan Paris does not just look artificial, it is. The most salient of many markers of artistic kinship with current Swedish director Roy Andersson is the fact that the film's setting is entirely constructed from scratch in a vast studio. This is an impressive, but also hugely exorbitant feat for Tati and his crew, for the set is adorned with massive urban conglomerations of seemingly full-size glass buildings, traffic circles, and a fully functioning populous. Pervading the film is a firm sense of this fakery, and Tati will often subtly draw attention to the fact that it is less a reproduction of Paris than a cartoonish prototype of a city in an increasingly modernized world, one whose idiosyncrasies are suppressed in the face of consumerism, technology, and globalization. For instance, the architectural landmarks that are a stamp of Paris's cultural heritage, such as the Eiffel Tower and the Louvre, are only seen via transitory reflections in swinging glass doors, and are otherwise conspicuously absent from the film. Ultimately, the world of Play Time, dubbed "Tativille", could be anywhere, a hypothesis made clear in one visual joke involving a series of posters on a wall depicting different countries with the same box-like twenty-story building nudged next to a stereotypical image of one of the defining characteristics of that country.

Unlike most of his contemporaries, Tati looks at the changing world not with an eye for dissociation and confusion but rather for genuine enjoyment and discovery. The film drifts in and out of different subjects extemporaneously - a group of bemused American tourists, a drunkard, and of course Tati himself, playing his famous Monsieur Hulot character in typically short pants and long jacket - and each perceives the environment as something alien yet altogether compelling, a playground for endlessly inspiring possibilities. Hulot is the most profoundly unsettled of the bunch, constantly being thrown off his intended path to meet with an American official by the exciting new trinkets of urban life; he marvels at the odd way in which the waiting room chairs in an office building make a vulgar plop sound and reform themselves every time he presses down on them, stands shocked and transfixed when all of a sudden the room he thought he entered suddenly transforms into an elevating contraption that sends him up a number of floors and into a new, undesired labyrinth of office cubicles, and looks on in bafflement when indistinguishable faces from his past experiences at war resurface and compete for his company. Whereas he is literally jolted involuntarily off his path by these uncontrollable forces, the tourists burst headlong through the consumer jungle without any deterrents, advancing on to more exciting attractions before they've even had time to truly process one. 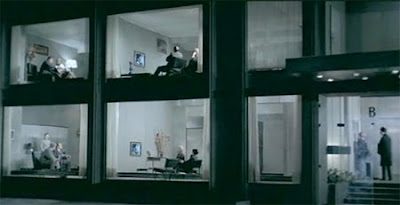 The comic irony with the tourists is that they're relishing nothing more than banal commodities of a competitive industry, unoriginal and wholly unpractical inventions that have nothing to do with Paris and everything to do with a desire for a faster, more convenient way of living. One gets the sense that the souvenirs the women salivate over (all of the tourists are old women, presumably reaping the fruits of their husbands' retirement funds) - sound-proof living room doors, brooms with headlights - could have been manufactured in any industrially mature nation, America included. What matters instead is the infatuation with the glamor of travel and foreignness, and even though they spend only a day there and wax ignorant about the nearest Americanized options, they get their coveted share of exoticism. Tati's presentation of them is teasing yet not overly critical, only a fun-loving gesture of mockery that illuminates the garish fashions, bland homogeneity, and short attention spans of some American tourists. Furthermore, he seems to celebrate their ecstatic myopia and the fact that its enough to wring pleasure out of an antiseptic maze, reducible as it is to a series of lifeless grids.

This is most tellingly conveyed in the 45 minute sequence that is very much the film's nucleus, a meticulously detailed opening night at a high-class restaurant. It must be one of cinema's most methodical build-ups of accumulated sight gags that doesn't so much culminate in one explosive punch line as it does gradually pile on the absurdity until the night reaches its inevitable conclusion. The tourists and other wealthy, snobbishly dressed patrons swarm the place before it has even been fully constructed, a premature act of excitement that ultimately costs them the structural integrity of the restaurant. Tati layers on little quirks, letting certain characters appear several times in similar shots. One particularly well-executed joke is the couple who have a large fish fillet on a platter in front of them but are unable to dig in because new waiters keep coming over to season it under the impression that no one else has, only to get distracted and abandon it. The entire scene vibrates with life, and the frames are absolutely filled by the end of it with dancing bodies. Although Play Time is an impudent satire, Tati is as attuned to the economy of people's behavior as he is the silly trivialities and hypocrisies, the way that they can make the most out of their situations and be delighted by even the most artificial and literally unfinished surfaces. It's a stunningly visual film that exploits the medium's fundamental faculty of sight, and is all the more stately on the biggest screen you can find.
Posted by Carson Lund at 6:15 PM

One of my all-time favorites, if not my favorite film, period. I saw it for the first time on the big screen in December, and it was easily the most incredible experience I've ever had at a theater, transcendent even. When the door breaks and the doorman starts miming the opening and closing of the door, the audience actually broke into applause. It's been hard for me to watch it on DVD since, so much is missed on the small screen and watching it alone seems to contradict in uncomfortable ways how the film embraces community.

Quite a nice, thoughtful piece you've written here on likewise one of my favorite all-time films. It's certainly Tati's masterpiece, and one of the boldest visual works ever constructed in the history of the medium. What a truly sublime and overwhelming experience it is to view this film for the first time.

I keep flipping back and forth between Play Time and Days of Heaven as the film I would choose if I could only choose one to see on the big screen.

Doniphon, I just saw it on the big-screen for the first time as well, unfortunately only in 35mm though. There are only a few prints circling the country of the 70mm version, and I can only imagine how much this film would benefit from a vast frame, something that would further blur the boundaries between the audience and the film. After all, we're all tourists when we enter the cinema, right?

Drew, I'd have to say that Days of Heaven would be equally blissful on a big-screen - the colors, the clarity, the depth. I might even go with that over Play Time, although I also long to see Eraserhead, 2001, Stalker, and Werckmeister Harmonies on the silver screen.

I can't say I enjoyed the film quite as much as you guys did; I found some stretches to be tedious with jokes that were simply redundant. If you haven't seen Roy Andersson's films, you should. His is a humor that connects with me more, and his visual style is equally Brueghel-like. Of course, I did find Play Time to be something special.