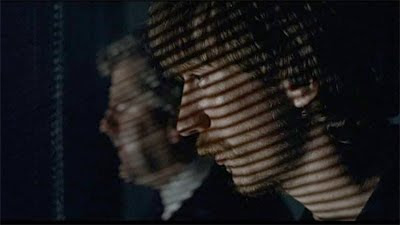 Mike Leigh's Naked is a film that comes at us with words, yet in its own way is wholly cinematic. Many of the keys to understanding and appreciating it are coiled up in its rapid-fire dialogue, buoyed in the sense that words are mostly peripheral, mere sonic blips that point to something more ineffable underneath based on the way they are framed, delivered, and received. What prevents the film from becoming a straitjacketed talkfest is the fact that half of the emphasis is on the words and half on the spaces between the words, which Leigh's unblinking camera captures effortlessly and his actors convey miraculously. Front and center in this affair, both the biggest supplier of language and physical presence in the film, is David Thewlis' Johnny, a nasty, embittered vagabond who pops off the screen in displays of carefree violence, rambling intellectualism, and fortuitous tenderness. So poised and realized is Thewlis' performance that it calls to mind Malcolm McDowell in A Clockwork Orange, Marlon Brando in On the Waterfront, and Daniel Day Lewis in There Will be Blood, other instances of a character seeming to have already been fully formed in an existence outside of cinema only to be eavesdropped on with a camera. Johnny is, almost without exception, an off-putting beast, a man so encumbered by the world that his lashings of cruelty, delivered with a startling regularity, feel like mild afterthoughts in the midst of a more cosmic tirade against the universe. Yet by the end of the Naked, having spent a great deal of time with Johnny, one is not left with a sour taste in the mouth. Moments of transcendence abound, and the gulf between good and bad is kept appropriately narrow, much like it is in life.

The film's exasperated opening shot shuffles in towards Johnny while he engages in rough sex with an anonymous woman in a Manchester, England alleyway. As well as adding a preliminary air of distaste around Johnny's enigma, this sequence contains the mystery of whether or not the sex was initially consensual or forced, announcing the ambiguity that will dictate the moral compass of the entire film. Right after Johnny finishes, he is frantically pursued by the woman's angered mobster family, a sweeping montage that occurs in a matter of seconds as if there was only a slim window of time that was afforded to the act before Johnny had to flee the scene (running of course, to approximate the ensuing pace of the film), steal a car, and cruise to London, where he bombards the private space of his ex-girlfriend Louise (Lesley Sharp). Within minutes a sexual energy is forged between Johnny and Louise's living mate, the perpetually kooky, drugged-out Sophie (Katrin Cartlidge). Leigh makes quick and painless work of establishing these three characters early on through their particular manners of speaking, their gestures, and the ping-pong of expressions that arise throughout their conversations. It is clear that a vibrant connection once existed between Johnny and Louise, and perhaps still does, but whatever is there is thickly masked by Johnny's incessant sarcasm and rude verbal attacks. Hearing the sound of Louise going about harmless routines while Johnny reads is enough to launch him into an agitated rant that starts local and ends universal, spiraling into a condemnation of people's short attention spans and their ability to get "bored" so easily.

This introduces a tendency in Johnny's vernacular that is constant, a nitpicky ability to detect small, prosaic behaviors or attitudes and relate them to some fundamental human issue, something that presumably went profoundly awry with the concept of society. When asked by Louise why he "looks like shit", he wryly responds that he is "just tryin' to blend in with the surroundings", suggesting that England has become a vast wasteland both aesthetically repelling and impersonal (referring to one building as a "postmodern gas chamber"). Later on, in the film's most flawlessly directed and scripted episode, Johnny evaluates the working philosophy of a night-shift security guard and swiftly discourages him that the future is anything to plan out, explaining through meticulous, erudite reasoning why mankind is set to dissipate in 1999. Despite his abrasive personality, Johnny is undeniably intelligent, brilliant even, spitting out bold theoretical musings at a rate that seems unimaginable until it's exercised by Thewlis. Furthermore, he's damn funny. Both of these facts issue a reason to reevaluate any initial judgments made about Johnny. Beneath his rough, mustachioed snarl and stringy coiffure lies a brain that is always processing and creating, a personality that is tirelessly in search of something better, mirroring in some ways his restless vagabondage and the fact that the only home to him means sleeping somewhere different every night. 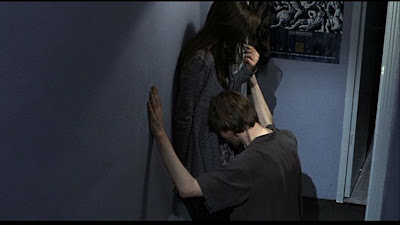 In this way, Leigh seems to be deliberately toying with audience perceptions, pointing out how much they can share in common with prejudicial modes of thinking in society and how dissonant they can be from fact. Though Johnny is homeless, unstable, and vastly unhealthy (his cigarette habit is on par with Jean-Paul Belmondo in Breathless), he is clearly well-educated and functions on a level high above most of the people around him. A foil to Johnny is Louise's smug landlord Jeremy (Greg Cruttwell), a man who has reaped the benefits of the same postmodern England that Johnny condemns as a hell but proves to be an even more vicious evil. Posturing as a suave, reputable businessman, he barges into Louise's apartment claiming to be meeting her other roommate Sandra (Claire Skinner), who is actually on vacation in Zimbabwe, and proceeds to assert himself with Sophie in a scene that is unquestionably staged by Leigh as a rape. Jeremy spends the rest of the film covered only by underwear lounging around the apartment disrespectfully. When Louise suggests calling the cops, Leigh includes one line of dialogue that is a direct acknowledgment of this thematic strand: Sandra wisely posits that the police will believe the landlord before the occupants because of their messy habits, always leaving the apartment littered with drugs and cigarette butts.

These are the only scenes that really abandon Johnny's presence, but even when he's not onscreen there remains the detritus of his big personality, a strong sense that he has covered all of the film's ground and made a lasting impact, negative or positive. The tragedy of Sophie and Louise is that they have been consumed by the fact of Johnny, unable to function without him being somehow bound to their thinking. For Louise, it is lament for whatever he was like when they were together, which has clearly been replaced by cruelty and disaffection. Sophie's infatuation is far stronger, as much of an addiction as her relationship with drugs is. Yet her almost pathological attraction feels unfounded, traceable as it is to merely a few disposable sexual encounters. She is a character who longs to feel a connection to something and will jump at even the slightest hint of one, assigning worth to behaviors that are actually vacuous. It is inevitable, then, that Johnny and Sophie's premature relationship will never work, because Johnny stands in harsh contrast as a man with an "infinite number of places to go" but who has trouble with the question of where to stay. This leads him to have a nullifying effect on women. What often begins to emerge as genuine interest - he inquires about Sandra's job as a nurse and sparks up a conversation with a Scottish yuppie in search of her boyfriend on the street - is overcome by an aggressive drive for sex that culminates in coldness and more anger. Leigh is acutely aware of this self-destructive tendency in Johnny's persona, heightening the film's worldview above mere misogyny.

Despite all of its time-specific elements such as an impending doomsday and a disillusioned English working class, Naked has the timeless, epic feel of an ancient tragedy filtered through the guise of contemporary realism. The strongest issues explored in the film are elemental ones like those in Johnny's rants, issues about human relationships, pessimism and optimism, the roles of sex, and society. There is an occasional image that bubbles up from the mostly fluid, naturalistic visual style that matches the gravity of these themes; Johnny standing alone in a deserted parking lot while fog breezes by, two silhouetted figures positioned before a row of windows in a dark room speaking floridly about biblical prophecies, and the disarming final shot, with Johnny limping down the middle of the road towards an uncertain future, a deeply poetic moment that uncannily recalls the death dance in Bergman's The Seventh Seal. Naked is a remarkably rich, engaging, humorous film that manages to break free from its initially off-putting premise, eventually reaching mysterious territory that is presented with astounding conviction from its cast. It's an amazing feat, but as Johnny would say, "there are some things in this world that you never ever ever ever ever fucking understand."
Posted by Carson Lund at 4:09 PM

"Naked has the timeless, epic feel of an ancient tragedy filtered through the guise of contemporary realism"

Great summation, and I think this specific feeling is one appears often in moments from many of his works subsequent to Naked, scenes like the one between the homeless man and Sally Hawking in Happy Go Lucky, just off the top of my head, have this same feeling of monumental emotional scope filtered through Leigh's realist style. Fantastic director.

Thanks a lot Drew. Thewlis is quite remarkable; I find it troubling though that he hasn't had many other noteworthy appearances in films, instead relegated to small supporting roles like in The New World and the Harry Potter series. I would love to see him in something larger-than-life again.

Unfortunately, this is only the first Leigh film I've seen. I figured I'd start on the one that is most highly acclaimed. If the rest of his work is half as good as Naked, I'd definitely label him a criminally under-appreciated director.

Well Naked is his masterpiece by far, from what I've seen of his others, Life is Sweet and Secrets & Lies are well worth watching, as is Happy-Go-Lucky which I think may be his best work since Naked