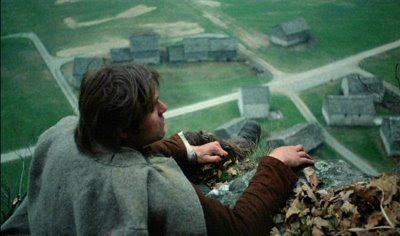 Heart of Glass is quite unlike much of anything I've seen. It is rambling but sublimely beautiful, excruciatingly slow but curiously enthralling, plotless yet carved out of a simple Bavarian folk legend, and gimmicky but intuitive. The entire cast (lest the prophet Hias) performs under hypnosis induced by director Werner Herzog, constituting one of the bravest conceptual decisions by a seminal director who otherwise has eaten a shoe, dragged a ship over a mountain, leaped into a cactus patch, and would most likely climb K2 naked if he had the chance.

The barest scrape of a story is conjured; in a Gothic, pre-industrial Bavarian village, a glass factory owner dies without a chance to pass down his renowned secret recipe for producing ruby glass and therefore sets off a moral crisis in the town - hammered home most tellingly by the younger glass mill owner who comes to fetishize the art of the secret - and elicits the arrival of an apocalypse-dwelling prophet. It's difficult to decipher most of the drivel that slips of out of the mouths of the hypnotized actors, thus causing elusiveness, but this is often precisely what adds magic to the film. Herzog was enthused by the idea of presenting people on the screen in a way that we have never seen them before, and the somnambulistic lull that results is indeed mystifying, less a form of Bressonian stiffness and more a warped Theater of the Absurd. Characters stare blankly, laugh uncontrollably, scream awkwardly, smash beer glasses on each other's heads, and wear droning patinas of gloom on their faces at all times in a way that brings to mind Roy Andersson's work. In one scene in a bar room, men sit posed like statues, the grave stillness in the room a poetic image of a civilization that refuses to fix its problems, declining rapidly while vainly fiddling with silly things like a glassblowing secret. Hias sees things on a global, even spiritual level, which is evoked in a nonsensically pessimistic way but reaches a sense of hope by the final scene, an anecdote about a group of spirited thinkers living on a rock island who finally decide after years of rumination to set off on canoe to discover whether or not the Earth is flat.

Heart of Glass is essentially an example of Herzog's conceit. The film is relentlessly formal and concept-based; most scenes unfold with a small number of cuts and the fixed, detached gaze echoes Bela Tarr (one bar scene involves a man playing a bizarre accordion-like instrument) and Tsai Ming-Liang's work. Herzog also periodically inserts stunning nature footage of the misty, mountainous Bavarian landscape to the kind of operatic accapella music he so frequently utilizes. There are a number of truly astounding images of hyperspeed fog rolling over trees, through swamps, over gorges, and around waterfalls. The film is at its most transcendent in such instances, when Herzog takes a break from his often times frustratingly oblique tale and does what he does best: capture "adequate images of our civilization". This phrase has an applicable ring to it as well; although the film takes place in Gothic ages, we are viewing a village that can be seen as a microcosm of human civilization as a whole. His recent succession of environmentally aware documentaries would certainly substantiate this.
Posted by Carson Lund at 6:07 AM

Great post. I agree about the strange appeal of this film; its somnabulent rhythms place the audience into the same condition as the actors, sleepwalking unknowingly towards the apocalypse. It's an "experimental" film in the truest sense of the word, an attempt to use a very unusual stylistic decision to express Herzog's theme of cultural ignorance.

Of course, Herzog also simply loves hypnotism and other unique mental states, as the various scenes of "hypnotizing" chickens in his films attest.

Thanks Ed. Certainly you're right about the audience sleepwalking as well. I felt powerless against the alien quality of it all, and eventually found myself nodding off slowly. (Of course I woke myself back up though.)