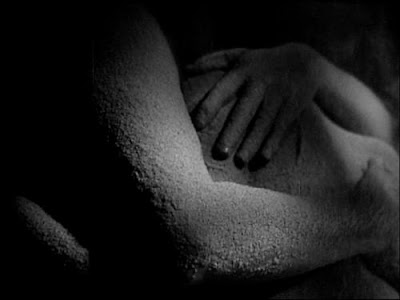 Alain Resnais and novelist Marguerite Duras were discussing over tea the likelihood of there being dozens of bomber planes circling above them on one afternoon in France. A few days later, Duras listened in on the conversation between a French woman and a Japanese man. These separate events become the unlikely seeds for Hiroshima Mon Amour, Resnais' profound masterpiece of a debut feature. Resnais had beforehand been toiling with a documentary project on the atomic bomb, a work that would hopefully attract Japanese and French interest. After giving it some thought, he found it to be an inane act considering the number of excellent, undistributed films on the subject already. This led him to Duras, whom he hoped to work with on a more classic love story that could feature the Japanese postwar situation simply as a backdrop. Hiroshima Mon Amour however, is anything but a classic love story; in fact, it is quite the opposite. It deals with the anxieties of romance and the personal turmoil it can often bring from a symbolic viewpoint, ruminating within an uncertain environment (dreamy postwar Hiroshima) on how the vagaries of time can both increase the intensity of a relationship and ultimately render it worthless.

The film begins with one of the most incisive, obscure opening acts of French New Wave cinema. For about 10 minutes, we do not see the faces of the two main characters that we spend our time with for the rest of the film: a lovely French actress (Emmanuelle Riva) and a rigid Japanese architect (Eiji Okada). Resnais intercuts abstract shots of their tangled, naked bodies with newsreel footage of the horrors of the atomic bombing to coincide with the woman's narrated recollections - which may or may not be entirely factual. The woman fleshes out what she remembers from a previous trip to Hiroshima, quite literally at one point, as we see what looks like powdered rubble from the bombing sprinkling on her pale arm. Her soft utterances are continuously denied by her partner in the affair, a metaphor for the suppression of memory. Nonetheless, the woman remains steadfast throughout the sequence as she does for the rest of the film, refusing to stop emptying out her unfiltered memories in the face of the man. Appropriately for two characters that remain nameless enigmas for the film's entirety, Resnais eschews full body shots, preventing the viewer from garnering a solid impression of the characters. Following this cryptic scene - a scene that has an unknowable place in time - the romantic affair between the two feels distant and intrapersonal, a vehicle solely for self-inspection.

As the film progresses, Resnais establishes a tapestry of contrasts. The architect is devoted to getting to know the actress and convincing her to stay in Hiroshima with him rather than returning to Paris, whereas the woman stolidly denies his offer, realizing that he is damaging her. When reminiscing on a similarly brief love affair she had with a soldier in Nevers, France years back, she begins speaking with "you's" instead of "he's", personifying the architect as the lost lover of her memory. Therefore, the architect's presence unceasingly reminds her of the pain she experienced back in occupied France simply due to the fact that her situation with him is nearly congruent. This sets off a split in the actress' own personality, on display in a compelling scene where she enters the empty hotel room the two are staying in and immerses herself in sink water, her self-directed statements alternating in and out of voice-over. One side of her urges not to get involved in another passionate fling (a subconscious transmission) and the other is torn between the love she inevitably feels and the prospect of future anguish due to the loss. There is also the political context of postwar Japan. The actress heads there with the task of acting in a film that is vaguely about "peace", but on another level, her purpose is simply to ground her identity in something concrete. She hopes to find herself in Hiroshima, a place rife with the strength of humankind (rallies take place in the streets), but conversely is thwarted by her own lack of clarity.

Hiroshima Mon Amour was described by the cohorts of Cahiers du Cinema - including Godard, Rohmer, and Rivette - as perhaps "the first modern film of sound cinema". It denies classical aesthetics, warps traditional narrative dogmas, and simultaneously references a very current theme (for 1959) and embodies universality. Alain Resnais was truly constructing an inventive way of creating films; his temporally chopped-up method of voice-over, fragmentation, and flashback imagery roots itself in the theories of Eisensteinian montage but also takes them further, allowing him to tell a story that perceptibly only occurs over a few hours in the present but stretches to the dark corners of the past and ahead to the future. It is an introspective drama that utilizes subtle shifts aurally - a scene where Riva's character vents to the architect in a tea house amplifies the ambiance when her memoirs become heavy-handed and muffles them when she realizes she is getting carried away - and visually - Michio Takahashi and Sacha Vierny's pristine monochrome cinematography captures nuances of feeling in a distinct way in each scene - to expand on the psychology of its characters. The crushing final lines (the woman calling the man "Hiroshima" and the man calling the woman "Nevers"), suggest the assignment of the two as objects, the complete and utter extinguishment of a relationship that, as time passes, will inevitably be forgotten.
Posted by Carson Lund at 6:01 AM