The trailer for Nuri Bilge Ceylan's latest film, Three Monkeys, left me hoping the talented Turkish auteur had not lost the restrained genius that has made him so distinctive. It includes a host of thriller trailer clichés: ominous flashes of negative, text that detaches from itself frenetically, distasteful solarization effects - in a word, it does not come close to doing justice to the subtle brooding atmosphere of Ceylan's third straight Cannes contribution.

At this point, Ceylan, hotly contagious among fans of high art, has established himself as the contemporary master of domestic tension, almost a Turkish Bergman when taking into account the amount of time he spends silently scrutinizing the emotional complexities of his alienated characters. While Three Monkeys does maintain this thematic bent, the film also introduces some elements that are new to Ceylan, for instance poetic hallucinations (the eerie sight of a deceased child in broad daylight) and cinematographic flexibility (the camera in Three Monkeys frequently spends time scanning faces in close-up or changing shots within scenes, whereas Distant's focus was on wide, prolonged static shots). Also, the film's characters are all well aware of each other's grief but refuse to vocalize their feelings, resulting in a more intense psychodrama than Distant, in which negative feelings were repressed and (just nearly) completely unexpressed.

The film's tension can be attributed to Ceylan's nifty, schematic approach; just about every scene contains only two characters reflecting on unseen wrongdoings, glancing morosely at each other, arguing severely, or lying about a day's events. We only see three people in the same frame in the film's most climactic scene, and those are the three stubborn monkeys that make up the shattered family at the film's center: Eyüp (Yavuz Bingol), the foreboding father who had done time in jail to assist his greedy politician acquaintance and receive a large sum of money in return, Hacer (Hatice Aslan), the deceitful mother caught up in an affair with the politician, and Ismail (Rifat Sungar), the suspicious son forced by the weight of the crisis into committing dreadful acts. Ceylan forges a discomforting quietude within the family, a product of his refusal to show the acts that trigger the dissolution, instead lingering for lengthy amounts of time on the nuances in expression in the solemn faces, the drawn out resonances of Hacer's adultery, Ismail's eventual violence, and Eyüp's shallowness. 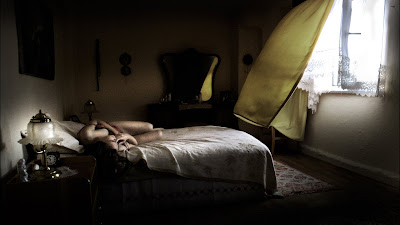 Three Monkeys is at the same time a commentary on the greedy nature of politics, the placing of public regard atop the need to take blame for one's faults. This is evident in the character of Servet (Ercan Kesal), the politician whose legal issues are dumped conveniently on Eyüp with money as the saving grace. Servet does not need to worry about his problems with Eyüp available as bait, just as Eyüp does not need to worry about his son's crime when he can simply offer up the punishment to his friend Bayram (Cafer Köse). The mostly minor actors do an outstanding job of manifesting the deep ocean of gargantuan emotions - love, hate, grief, confusion - into a largely wordless spectrum of shadow-eyed facials and tense body movements.

Perhaps the finest achievement of the film however is its technical beauty and tonal singularity. The inherent menace in the script is supplemented chillingly by atmospheric sound design; rolling thunder, rustling winds, crickets, diffused barking dogs, clanking train tracks, and amplified drips create a palpable mood that far surpasses anything a score could have brought to the film. And of course there is the cinematography, which, as is expected from the highly skilled photographer/filmmaker, is absolutely immaculate. Ceylan has crafted a world of shiny, somber faces against huge black clouds, windy terraces overlooking the sea, and wet winding roads containing careless individuals, all adding up to his most riveting piece of cinema to date.
Posted by Carson Lund at 4:43 PM