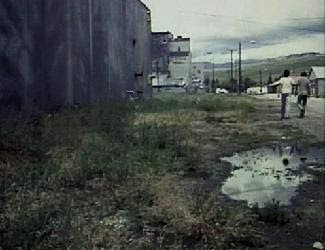 A twentysomething ditches a semester in college to look for something to do, taking train and car rides across the West while meeting friends and family along the way. Sometimes he spends his time in a worthwhile way (hiking to see a glacier in Montana), but for the most part his activities are meandering (sleeping on a train, watching TV, moseying around empty towns, driving and fiddling with FM radio). This is the extent of what happens in Richard Linklater's debut, It's Impossible to Learn to Plow by Reading Books (I'll call it It's Impossible from here on out for obvious reasons), and now that I look at in writing, it sounds more eventful than it really is.

Linklater's early work is marked by its meditative attention to the humdrum, its careful observation of Generation X, and its general flavor of early 90's nostalgia (high-rise acid wash jeans, retro Nike's, tall striped socks, sleeveless shirts). It's Impossible was handled entirely by Linklater on Super-8 film, including the casting of himself as the primary drifter. He describes the project as a visual experiment and a diaristic study on the boredom of everyday life, the transience of emotions, and the mindset of travel. Here's where it gets tricky; to be sure, creating a film that evokes the "boredom of everyday life" can perhaps be the laziest way to make an "experimental film". Indeed, it could just take planting the camera lackadaisically and observing the most mundane events life can offer, most of which are, quite frankly, on display in It's Impossible. It's tough to decide at face value whether the film is the work of a pretentious hack or of a modest, zen-like observer. It could be a bit of both, but thankfully, keeping in mind the similarly attentive, undeniably tremendous work that followed from Linklater, I choose the latter.

The film unfolds entirely in long, static takes, a style he maintained with his next feature, Slacker, with the exception of the lack of camera movement. Slacker glides ceaselessly with its characters, whereas It's Impossible sits like a dead duck, reminding us bluntly of the directionless state of the inhabitants (the camera rarely breaks the barrier of ten feet from its subjects). It is a vacuous film about sad and lonely people who hide their disconnectedness with cordiality and useless, time-passing behaviors. Linklater's screen persona has no dignified purpose for his travel; rather, he is surveying the suburbs and countrysides in an attempt to discover something that will substantiate his transitory nature and lift him from his alienation. In a train lobby at one point, he brushes against connection, sitting silently beside another seemingly listless young woman and eventually drawing a picture (or is he writing a note?) for her while she sleeps. One can sense the desperate need for the protagonist to release his inner feelings, but he remains locked in the dreamy, drifting state that is most keenly evoked by the shots of him transitioning from one train cabin to the next, bumping around precariously while the camera remains static.

There's no doubting that Linklater achieved his goal - the film feels like you've entered another person's dull life and are seized by the lack of accomplishment during every fleeting moment - but the question is whether or not the film is good cinema. Technically, It's Impossible is ragged, with poor sound quality and relentless grain (although, this is something I see as raw beauty). However, the film utilizes the two most essential ingredients of cinema (image and sound) with clarity and purpose, so the entertainment value is on a whole different level. It's Impossible is at least a comfortable preamble to Linklater's later work, and the distinct mood it builds assures it's a success given its humble ambitions.
Posted by Carson Lund at 6:06 AM