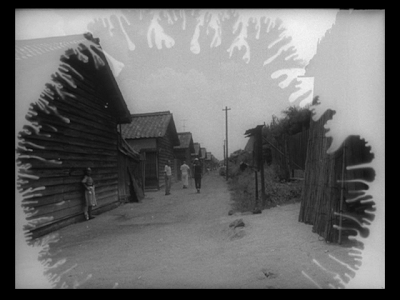 Pitfall hurriedly opens as if it was spliced out of the middle of a Japanese thriller, however the scene is silent with the exception of the invariable sound of a vigorous saw thrusting through a log. Hiroshi Teshigahara presents a father and son on the run - dodging around shadowy corners and through dimly lit streets - without the stylistic checkpoints such a scene may usually contain. Rather, his unsettling sound design and stark images create an otherworldly mood which sustains itself for more or less the rest of the film, the first entry in his existential trilogy based off Kôbô Abe novels. Oddly, the film has theatrical origins, but Teshigahara - with his inimitable jack-of-all-trades touch - transforms it into something that only seems fit for the screen, a cinematic amalgam of capitalist critique, alienation study, a deceitful thriller, and a surprisingly anti-frightening ghost story.

We discover soon enough that the man on the run is actually a migrant miner, skipping from job to job in constant fear of the harsh industry. He is followed ominously by a stone-faced man in a white suit and hat who is first seen by the young son taking a photograph of them behind distant plants. While on a mission to join a new agency he was appointed to, he finds only an abandoned mining town where a lonely woman (much like the one in Woman in the Dunes) sells candy. On a stroll through the barren terrain, he discovers the man in the white suit following him relentlessly until he is chased into tall grass and murdered. Because of his shady enigma, it's tempting to paint the murderer as a symbolic figure, but the film also hints that he's caught up in a corporate mix-up, thinking the miner is actually his doppelganger, a member of one of the halves of a split worker's union. Through a haunting use of backward slow motion, the man awakes as a ghost only to have the inevitable confirmed: ghosts cannot communicate with the living and are damned to spend the entirety of their postmortem existences in whatever state they were in at death. Nonetheless, the man strives for justice, following and peaking in at the conversations that make up his murder investigation. He prods, screams, stares, and suffocates the inspectors in a fruitless attempt to leak the truth. Finally, once the candy vendor is also killed by the enigmatic man, he can explain himself to someone in spite of the fact that the woman is deeply confused after seeing the man's doppelganger and therefore questioning the murder itself.

Amidst all of this, Teshigahara visually interprets Abe's themes of the nature of existence by treating the living and the dead with near equivalence; the ghosts are wholly capable of human emotion, their self-immersion and insistence upon explaining their fate mirrors the miner's greed, and there are no horrific connotations assigned to them. We see two separate, analogous worlds (living and nonliving) inhabiting one ghostly town which seems to hold no place in either. As usual with the Japanese artist, Pitfall is visually confounding cinema, a disconcerting journey into Kafkaesque surrealism filtered through a documentary-like attentiveness. There are mesmerizing shots of the endless cabins in the ravaged mining town, brief spurts of newsreel footage, unexpected special effects, and of course more macro images of bugs. The film is never as coherent and ultimately affecting as Woman in the Dunes, his acclaimed follow-up to Pitfall, because of its ambitious willingness to bounce around the narrative so freely, but we still get Teshigahara, Takemitsu, and Abe at their most inspired.
Posted by Carson Lund at 12:13 PM

I would give it a similar rating. When watching it though, I couldnt help but think this movie (for better or worse) is ripe for a Hollywood or just American remake

I'm curious how come. This film is pure Teshigahara, and i think a remake would most certainly be for the worst. It seems like it would become a sloppy horror without the metaphysical concerns of Abe and Teshigahara.