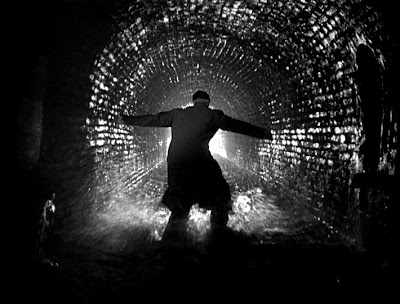 Carol Reed's noir thriller The Third Man contains a sequence towards the end that is often said to be one of Orson Welles' defining moments on screen. He is playing Harry Lime, a friend of cheeky American novelist Holly Martins (Joseph Cotten), who, in this scene, is witnessing Lime for the first time after investigating his supposed death in Vienna. The two ascend on a ferris wheel and Welles gives a wonderfully quick-witted speech that, like the carnival device they are stationed on, goes in circles continuously. It's a nicely written scene by Welles himself, but it lasts so quickly that it brings into question the performance itself. Surely any great actor can enter a film for a moment and deliver some eccentricities, but should this mean they are remembered so fondly for the entire tenure of their art?

This scene is much like the remaining scenes in The Third Man, an impermanent romp that feels out of step with the rest of the film. Indeed, I do believe the film is largely overrated and is by no means the classic it is almost ubiquitously regarded as. This bothersome modular quality in the film is also reflected in Roger Ebert's review; each paragraph lists seemingly meritable aspects of Reed's picture but fails to bring it to any sort of cohesion, some sort of decision on why the several parts add up to a solid whole.

The film follows Holly Martins on his trip through a post-war Vienna, meeting Lime's associates and his rigorously loyal girlfriend Anna (Alida Valli), but finding that the truth is rather elusive. A British official named Calloway insists Holly stop wasting time over Lime, for he was an unjust man. Nonetheless, Martins continues his search, naive in the face of it as well as his company with Anna, whom he fruitlessly tries to flatter. Reed tells the story with a weakness for economy, diverting from his thriller plot several times to focus on mundane aspects of Holly Martins' bluntly American character, who Joseph Cotten plays quite forcefully.

Robert Krasker's cinematography is likely the high point of the endeavor; the murky Vienna streets are extremely well photographed, lending an expressionistic glaze over the story, but the film does not embellish his visuals for lengthy amount of times, save in the final, and best, sewer scene. In spite of this, Krasker manages to give birth to one of my biggest pet peeves in cinema: the wretched tilted angle shot. It seems a far too literal way to evoke a crooked, out of synch atmosphere, not to mention leaves a viewer's neck with a subtle ache by the roll of the credits.

Elsewhere, Anton Karas' famous zither score is only detrimental to The Third Man. Its annoyingly repetitive and clanky sound blatantly contrasts the mise-en-scene, turning what should have been a low-key thriller setup into a story that nearly seems to be a parody of itself. Although the surface elements of the film are extremely disjoint, there does seem to be something stirring underneath, a notion that is hinted at in the final scene involving the men chasing Lime through the shadowy Vienna underbelly with (beneficially) no zither. Sometimes however, it's just too difficult to get past the film's lackluster pacing and bother to find out.
Posted by Carson Lund at 6:13 AM

This is a great movie, that I didn't once find boring. You are judging from your blog, one of the most pretentious idiots who's opinions I have ever had the displeasure of reading. You're the type of person who only seems to enjoy obscure foreign films. Do me a favor and go jerk off to Bergman's Silence of God trilogy instead of posting your movie reviews on the internet. KTHNX LOLZ

Well Rodger you seem to be the type of kid who gets all pissed off and immature when someone doesn't share the same opinion with you. What bothers me the most is that you claim Carson only likes "obscure foreign films" when there are so many other American film reviews with good ratings. He's not even judging off of Rodger Ebert in this review, it's more of a criticism; I knew that because I READ the review. I don't give a god damn if you don't like the review, just stop going to this site and writing stupid, thoughtless comments. And by the way I just got Bergman's trilogy in the mail and I just can't wait to jerk off to it apparently.

well, I have read some of this guy's other reviews and some of them are contemporary American films. there are also some other modern European and Asian films which I don't consider half as obscure as a film noir; They are, if anything, pretty accessible. Are you simply objecting the fact that he didn't think it to be "a great movie,"? if you are, you seem to be such ignorant ass because you never once make a case for it being a "great movie" but rather take it on this guy simply because his thoughts differ from yours. Also, dude, what is one to make out of the signs at the bottom of your post? I was unable to discern anything out of your primitive burst of stupidity, learn how to speak English. oh and by the way, I suppose I have jerked off to Bergman's trilogy, since I saw it and loved it. My conclusion: best phallic experience ever.