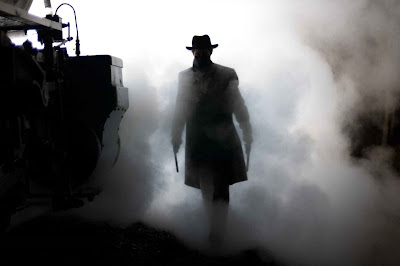 There is certain grandeur in The Assassination of Jesse James by the Coward Robert Ford, a treatment of the Western landscape as a lively vacuum that warps men into pawns or legends that recalls Terrence Malick's terrific romantic saga, Days of Heaven. The film's director, Andrew Dominik, seems to be heavily influenced by Malick in his refusal to deal with the written-on-the-wind outlaw Jesse James in a banal biopic manner, opting instead for a lyrical, meditative psychological study of the relationship of two men. As the lengthy title bluntly puts it, the film is studying Robert Ford (Casey Affleck) and his idol Jesse James (Brad Pitt), whom Robert finally gets the chance to meet when his brother Charley (Sam Rockwell) finds himself working in James' gang. Languorously, Dominik shows us the long days following James' final train robbery, when he invites the Ford brothers to stake out at his home with his wife and kids.

We watch Robert's unceasing fascination with James evolve into hero worship, and then fall down into jealous one-upping, prompted by the kick Charley gets out of teasing his brother for the collection of James memorabilia he owned growing up (he is only 20 in the film). Affleck's character's fetishes make for a prime example of the kind of romanticizing of men that featured prominently in late 1800's America. There was a powerful admiration for outlaws like Jesse who valued the greater good with little acknowledgment of the law. The film however, manages to de-sensationalize James, showing his base humanity, a rough, unpredictable (even psychotic) enigma. Pitt's portrayal of him is the finest of his career; underneath his coy smile lays a veil of uncertainty that is always vulnerable to erupt into hyena-like snickering or violent, in-your-face seriousness. Affleck also does one hell of a job as Ford, the slicked-haired, creepy young coward whose final attempt to bond himself with his idol is murder. The assassination scene is curious psychologically: in a living room with daylight pouring in, Pitt trudges over to a painting to dust it off while Affleck raises up the shimmering pistol that James just lent him for his birthday. James seems to have an awareness that he will be shot, or he is just testing Robert, or it is possible that he wants to end his life, because when Ford clicks the trigger in the silent room, James stiffly remains in his spot, dusting off the painting that clearly doesn't require immediate dusting.

After this taut scene, the film concludes with the life of Robert - now known nationally for his notorious crime - who eternally relives the murder through his theatrical rendering of it. This culminating act is also when the literary third-person narration (one of Dominik's troublesome choices) takes full steam, unfortunately explaining eloquently much of the depth that the film reveals more cinematically. Director of Photography Roger Deakins does a flawless job capturing the imposing countryside, frequently providing artful images of wheat fields, threatening skies, and snowy stretches of land. In fact, I think his gorgeous work here slightly improves on his showing in No Country for Old Men. Unfortunately, critics too often focus on the titanic length of The Assassination of Jesse James by the Coward Robert Ford (160 minutes), which I think scares viewers away. The length serves the epic sweep properly, and while there are some empty stretches, there is enough complex characterization in the film - and an acknowledgment of the dangers of allowing idolatry to slip into worship - to overcome any minor flaws.
Posted by Carson Lund at 6:06 AM