Days of Heaven (1978) A Film by Terrence Malick 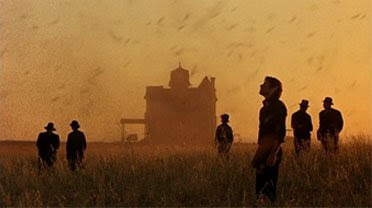 Terrence Malick's sleek period piece Days of Heaven is brimming with subtle denials of convention. Set in the heavenly wheat fields of Texas during the early 1900's, the film follows (and tries hard to keep up with) a group of adult laborers as their lives unfold problematically. Bill (Richard Gere) and Abby (Brooke Adams) are at the heart of the story as a young couple trying to make their way in the world, starting in a tense city environment from which they want to escape with the young Linda. Eventually they do and land a meager job in the wheat fields, where they meet a wealthy, savvy young farmer with eyes for Abby. Abby is certainly not your typical 1800-1900 Keira Knightley-esque "glowing beauty under a veil" woman; she is a rough-around-the-edges laborer. Interestingly, the film is voiced over by the naive, droll accent of Linda, a decision which succeeds in clumping all of the marginally central characters into one level of static importance.

In a film where the textures, sounds, and rhythms are of paramount emphasis, defining a plausible "main character" becomes nearly unnecessary. It seems that the film, which develops over three different settings, a hefty amount of time, and loads of plot upheavals, has a strong focus on the cycle of life in these turn-of-the-century times, whether it be in terms of each particular character, the habitat in which they live, or their respective communities as wholes. Given that the film ends on a spoken wish laid out for a suddenly introduced character, the latter seems to be true; there are several portrayals of the ripple that each character has on their surroundings.

Unlike most period works which are known for having a languid compiling of details and an attention to the "accessories" of the mise-en-scene, Malick's film has a swift, lyrical feel to it that is in a way Bressonian. Conversational scenes that one would expect would go on romantically for what seems like ages are chopped up to short episodes of simplistic exchanges. There is an admirable quality in the matter-of-factness with which the scenes are seamlessly integrated. That being said, it does sometimes push aside the humanistic aspect of the film and bring to the forefront the poetic and visual. Nestor Almendros, the cinematographer, won an Oscar for Days of Heaven and rightfully so. Almendros cites early cinema and monet paintings as being his source of inspiration for his tendency toward natural lighting in the images. Apparently the Hollywood crew would get annoyed by his refusal to use the arc lights they had set up before the shoots. However, the right decision was certainly made, as the interiors and exteriors shine with authenticity and rapturous colors. At times the images are slightly grainy or dark due to the drastic lack of artificial lighting on the set. This film had some trouble reaching wider appeal because it has the ability to abandon its humanistic themes for the pleasing tones of the internal story, which includes the horses, the pastures, the mansion, and the wheat. If a thinner character compilation seems displeasing, this film may not be for you. If you think you'd enjoy a refreshing period film with a climax that is just short of brilliant, Days of Heaven is the right match.
Posted by Carson Lund at 2:17 PM

dig your blog, our tastes seem to similar on most every film you review. However, I regard Days of Heaven to a higher regard, but anyhow, you might want to mention that Haskell Wexler assumed Almendros' position when he had to go to Europe and film, and Haskell filmed a considerate amount (he claims to have watched the film with a timer recording his portions, which equal to about half the film).

Your blog inspires me to almost start reviewing films on my blog, but I dont want to cramp your style. Thanks for the good reading!