Cries and Whispers (1972) A Film by Ingmar Bergman 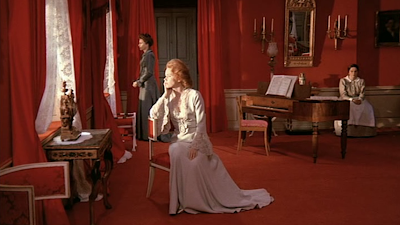 There's a chilling image early on in Cries and Whispers that gets to the core of the film, perhaps even to all of Ingmar Bergman's oeuvre. It's a tight close-up of Harriet Andersson's face as she lies in bed. It shows a women in a comfortable setting, with a soft white pillow filling up the edges of the frame. Yet the strange progression of feeling that flows through Andersson's face suggests that the pillow has no power over human emotion. Andersson's playing a dying woman named Agnes, but the film has not yet made the fact or nature of her illness clear when the shot arrives. As it begins, Agnes is just waking up. Her face goes blank for a moment before stretching into an odd contortion. The first hunch is that she's yawning, but that supposed yawn shifts effortlessly into a gape of seemingly horrendous pain, and ultimately resolves itself into another blank facade, this time graced by a hint of a smile. It's a close-up of unorthodox length, and across its long runtime it captures a myriad of powerful emotions co-existing: indifference, relief, pain, sorrow, misery, boredom, catharsis, happiness. Bergman's films have always made it an uncomfortably blunt truth that a psyche cannot possess one of these states without the rest of them. Cries and Whispers seems built entirely around that idea.

An echo of this shot emerges later in the film when Agnes' oldest sister Karin (Ingrid Thulin) reacts to Agnes' younger sister Maria's (Liv Ullmann) frank pronouncements of the distanced state of their relationship. Karin buries her face in her hands, beginning to laugh but also cry, and when her face returns from her hands, the distinction between the two is still not obvious. Cries and Whispers boasts some of Bergman's finest and most respectful direction of actresses, a skill he was able to master throughout his career, but here the performances reach majestic levels of complexity and candidness. Andersson with her gasping, unflinching morbidity, Thulin with her ice-cold hatefulness and detachment, Ullmann with her self-involved vulnerability, and Kari Sylwan (as the maid Anna) with her bruised despair; it's impossible not to think of the film first in terms of its faces, big, bold, and passionate, always dominating the screen. A consistent editorial device is a cut to one of these faces staring directly at the viewer, positioned in front of a black abyss. There's an urgent confrontational quality to it. 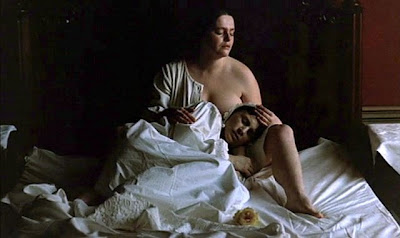 Limited to a single setting and utter silence with the exception of dialogue, ambient whispers, the infrequent use of Chopin and Bach, and the occasional impact sound, Cries and Whispers distills Bergman's aesthetic to its simplest form. The film feels very little need to couch its spiritual questioning in narrative forms; it uses the enclosed tomb of a countryside mansion as an arena in which to directly address matters of faith, death, and love. Sure, there's a narrative here - Agnes is slowly dying from cancer and the event of death gradually reveals the ugly truth of the sisters' relationships - but Bergman doesn't treat it as such. Rather, the film is a trance-like parade of the most harrowing of emotions, treated in an almost free-associative manner. In the following order, Bergman shows confrontations with mortality, petty displays of vanity and sexual desire, scorching proclamations of self-hatred and insularity, hallucinatory stages of grief, troubling instances of emotional denial, and, finally, an ambiguous vision of posthumous bliss. Stitched together by the pulse of red transitions and the direct address close-ups, there's a great fluidity to this evolution, a sense of logical emotional development that could never come through on paper.

Bergman opens the film with a characteristically moody introduction, a sequence of images divorced from dramatic context. Shots of the outside of the manor on a foggy morning are framed by Sven Nykvist with unusual compositional dynamics - twice, a fat tree is placed just off center in the frame, seeming to insist upon blocking the view of the yard. As the only exterior shots potentially taking place in the "present" (the rest occur in idyllic recollections by the central characters), it's as if Bergman is establishing the present as something that is unreachable, forever shrouded in mist: these women, in their womb-like mansion (Bergman allows only the faithful Anna a brief view out a window), seem to exist perpetually behind the present tense, so fixated on death and despair that they're constantly leaning backwards, their only source of positivity in the past. These images then bleed into close-ups of ticking clocks, one of Bergman's signature motifs. The insistence upon time further situates the sisters in a march towards death, and the next scene features Karin, Maria, and Anna literally waiting for the death of Agnes in the adjacent room. (In fact, at one point Maria even appears dead in a pose that would recently be echoed by a dead woman in Manoel de Oliveira's The Stange Case of Angelica.) Time moves too fast and too slow simultaneously; Agnes both craves a release from her imprisoning pain and fondly recalls instances of pleasure that make the fear of doom palpable. 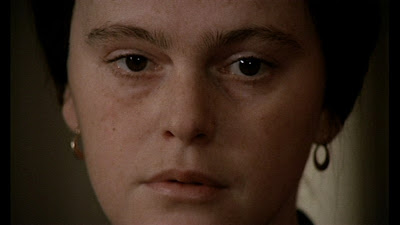 The figure of Anna offers the only respite for Agnes' consuming misery. Anna's treated with a lack of respect by Karin and Maria, and especially by Karin's malevolent husband Fredrik (Georg Årlin), who later tries to lay off Anna without so much as a thank you for her long-term work, but she retains a core of dignity against all odds, ostensibly due to a belief in God and an understanding of death. This makes her the most suited to deal sympathetically with Agnes' illness, as well as rendering her the mystical presence of the house, a kind of death prophet. The sadness that ignites within her at the prospect of Agnes' end, which is ever so subtly suggested to be rooted in lesbian interest, is overwhelming, but it does not cause her to break down as drastically as Karin and Maria. The two sisters feign self-control, but their devastation manifests itself in immature acts of wickedness towards one another. Death can be a uniting force, but for these women it's something that eats away at their weak inner being, separating the already significant emotional gap between them even further.

A recurring visual element in Bergman's work, particularly with Nykvist as DP, is the alarming use of rack focus to bunch faces up against one another. That technique is used frequently in Cries and Whispers, often when loosely conveying Agnes' subjectivity. One of the sisters will enter the frame and turn away in fright at the sight of Agnes in pain just as the other sister intrudes in the foreground, coming aggressively into focus. For a film so restrained in its visual palette - Bergman and Nykvist rarely move the camera and rarely cut away to wide shots - it certainly finds ample ways to aestheticize the interplay of human faces, extracting a dramatic intensity through such minor means as a precisely choreographed rack focus. The relative subtlety of such maneuvers balances out the film's oppressive use of blood red, a conceit of remarkable effectiveness and remarkable obviousness simultaneously. That it's both points to the great power of Cries and Whispers; red is a color whose implications are built so intrinsically into our lexicon of artistic analysis that it begs to be paired with such vital thematic material. This is a film whose depths are integral to human nature.

You did this film justice and then some. As you'd imagine, it will place in my top 10 this September. Staggering use of color, and emotionally harrowing (as you say) in a unique way. This one stayed with me a long time after I first saw it.

I've often thought of putting together a list of films that near overwhelm with the use color. I hate crediting Spielberg with anything, but his transition to color at the end of Schindler's List -- and the fleeting bits of red throughout -- are brilliant. Bergman's use of blood-red in this film is analgous in a queer way (pardon the blasphemy), as we're so accustomed to his black-and-white fanfare. At least for me, it was the first color-film of his I ever saw. Try watching Cries and Whispers after, say, the loss-of-faith trilogy, Hour of the Wolf and Shame -- BAM!

Yeah, this is quite the unexpected and bold use of color. It's such a dominant presence in the film, especially after Bergman had made so many films renowned for their use of chiaroscuro black and white. Like I said, I don't think it's particularly subtle, but it doesn't need to be either. The rest of the film covers that ground.

On another note, there's a whole lot to praise about Spielberg, but Schindler's List - handsome use of red aside - doesn't really need to enter that equation.