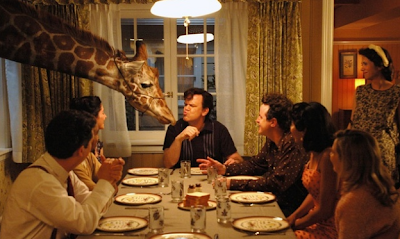 Phone Booth (2002): Larry Cohen originally proposed the seed of this idea to Hitchcock, and it's no surprise. Decades later, Joel Schumacher took the seed and grew it into an economical gem featuring a man and an unseen sniper that thrives on its precise distillation of time and place. Phone Booth would make a neat double bill with John Cassavetes' Faces; both films use extra-marital relations as a narrative motif, and Schumacher and Cassavetes realize the potency of the human face and its ability to carry drama. Characters seem defined by the presence or lack of sweat beading down their face at any given moment, while Schumacher's montage is often narrowed to bustling cross-cuts between NYC windows and tormented expressions. Colin Farrell is in top melodramatic form, conveying waves of exposition through his face alone, and when Forest Whittaker enters as a vulnerable police chief, one can sense the film's artificial sweat budget (whatever that might have entailed) rising exponentially. This really is edge-of-your-seat entertainment, as they say.

Walk Hard: The Dewey Cox Story (2007): Continuing adventures in the offhand surrealism and half-assed improvisation of Judd Apatow-produced comedy (see: Step Brothers, Anchorman, Pineapple Express, Get Him to the Greek). In fact, these are attributes that seem to emerge only when Apatow is in the producer role, instilling in them a strange sort of extra-textual cohesion that poses a challenge to the auteur theory and gives the films a distinct tone among American comedy. Step Brothers remains the most interesting mess, but Walk Hard is a special breed of genre spoof: structured yet happily uneven, hokey but weirdly emotionally involved, straightforward and digressive at the same time, quotable yet only in the most unconventional sense (long lines, recurring bits of dialogue that are slightly altered). It feels like a film that was made on-the-go, incorporating various ideas from crew and cast members alike, resulting in a very strange and very engaging hodge-podge of American music mythology and other, more private inspirations. Some flashbacks - as well as wild animals in domestic settings - seem to mine the exaggerated Americana of Lynch, while one episode of a drugged-up John C. Reilly wreaking havoc in underwear plays like a variation on Leos Carax's Merde.

The Wind Will Carry Us (1999): My issue with Kiarostami's film is the same issue Ignatiy Vishnevetsky expressed with mumblecore movies - namely, that it seems to be "building itself on certain absences instead of particular presences," but before I say anything more I should address that this is just a first-time impression and I believe I have every right to be wrong. Only days after seeing this enigmatic bare-bone of a film have its non-gestures and vague symbols started to coalesce into something interesting. During the viewing, I will admit, I found this to be relatively unimaginative (planted camera panning with the action) and at the most schematic end of Kiarostami's sensibilities, from the redundant joke of the protagonist searching for cellphone signal right down to the doctor's sentimental monologue and the "life-goes-on" final shot. I'm already beginning to see some of the merits of these decisions in retrospect, but there's one sticking point that hasn't escaped me. I think there's a pretty crucial distinction between the kind of living-as-filmmaking-as-living approach that Pedro Costa takes with his portraits of the lower class and the cerebral autocritique Kiarostami is after here: one involves living with and gaining the respect of the subject and the other involves presenting a character who gains no respect and proceeding to critique his hasty entitlement. Given the seeming hostility of many of the Kurdish village-folk here in the presence of Kiarostami's camera, I'm not sure that making a statement about the ethical dilemma of exploiting the less fortunate for the gain of the higher classes makes it any less exploitative to go ahead and actually engage in the act of filming them.

Wedlock House: An Intercourse (1959): What Brakhage is doing in this 11 minute short is not depicting a marriage but rather the memory of a dream of marriage. In this sense, Brakhage and his wife Jane feel like ghostly presences, for the most part reduced to shadows and bodily fragments portrayed in celluloid negative. It's a film that I feel could be played on repeat next to me as I sleep, and if I were to wake up, I wouldn't be sure if I was dreaming or not. The film plays with negative and positive space on the screen with amazing fluidity, using wafts of cigarette smoke, light flares, and a shifting spotlight in between waves of darkness to negate the visibility of cuts, and this seeming continuity of time, coupled with a jarring discontinuity in space, provides a kind of euphoria whose only equal is the notion of recalling a dream. It's haunting stuff.

Desistfilm (1954): A kinetic burst of beatnik energy, perhaps part of the delirious stew of influences behind something like Guy Maddin's Sissy Boy Slap Party or David Lynch's recent "Crazy Clown Time" music video. It's just some teenagers dicking around in a room, but with seemingly arbitrary pans and tilts, exaggerated performances, and funky camera angles, Brakhage makes it so disturbing and anarchic. Watch it.

Girls (Season 1 Pilot) (2012): I'm firmly in Adam Cook's camp as far as Louie goes, but I'm not sure I want to wait around with Girls to further dig into its supposed auteur cred. Quite simply, I have no interest in hanging around the people that populate this show. There are too many of them in my life as it is. I trust Dunham's honesty, her wit, and her ability to let visuals grow organically from dialogue (even if it dulls the considerable talents of DP Jody Lee Lipes), but I just don't need it. Call me biased.

Absolute cosign on Phone Booth. It's been awhile since I've seen it but I remember enjoying it immensely, a real model of wringing suspense and tension from the most economical of means. It's definitely one of the better of all these high-concept thrillers Hollywood has been churning out for the past couple decades.

Yes! I'm glad someone else is on board with Phone Booth. Of course it's an idiotic plot, but I love the precision and conviction of it. And the way it deals with sound is quite interesting too.