The Wedding March (1928) A Film by Erich von Stroheim 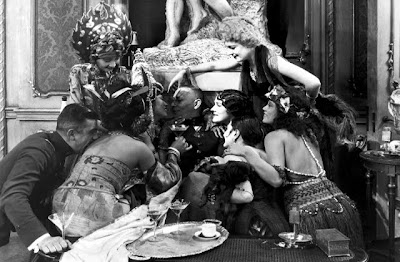 Erich von Stroheim's The Wedding March is one of the few works in the director's ambitious yet compromised canon still surviving in roughly its original form. An alleged sequel to the film entitled The Honeymoon was destroyed more than half a century ago, but one senses that its presence would neither re-contextualize nor augment the impact of The Wedding March itself, which feels remarkably complete in its overwhelming passion and brutal nihilism. It's a naked film in both its emotionality - desire, love, hate, and misery are among the big feelings displayed shamelessly on screen - and its design, which is characteristically straightforward and even obvious at times, a hallmark of the von Stroheim approach. The strange thing about the film, though, is that its earnestness and visual bravado always manage to cut through the often bulky construction, head-slapping metaphors, and outrageous innuendos. This is a beautifully unkempt film, a rich man's cinema of irreverence and honesty.

It's easy enough to see where the film is headed within its first ten minutes. Following an audacious title card that reads "dedicated to the true lovers of the world," the film introduces the unstable domesticity of a gaudy aristocratic family whose members seem defined by one or two emotional spectrums: there is the main character Prince Nickolas von Wildeliebe-Rauffenburg, played by von Stroheim himself, with his varied costumage and smug sense of privilege (despite his diminishing funds), his father Prince Ottokar von Wildeliebe-Rauffenburg with his boiling anger that causes him to perspire at all times (or is it the steamy light instruments just out of frame?), and his mother Princess Maria (Maude George) with her obliviousness to the swine-like nature of her husband. Conversations circle around financial need and excess, and the family's extracurricular activity is limited throughout the film to garish parties where all forms of debauchery (heavy drinking, esoteric sexual acts, ludicrous deals slurred in stone) run rampant. The absence of warmth becomes palpable in von Stroheim's aloof compositions, which frame the palatial surroundings as alternately majestic and dwarfing. The Wedding March's goal announces itself: to skewer the pomposity and absurdity of the upper class and its unfair delegations of behavior. 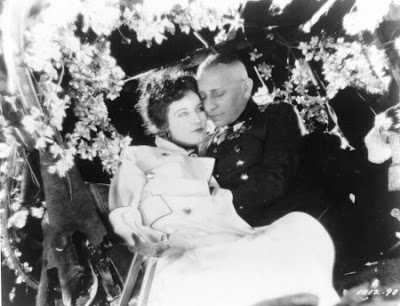 The strange von Wildeliebe-Rauffenburg family dynamics make themselves apparent in Nicki's early request for money: shoot yourself or marry money, Ottokar unflinchingly responds, and Nicki's obvious decision sets off the plot. We later see Ottokar's alcohol-driven arrangement with Fortunat Schweisser (George Nichols), a wealthy industrialist, of a marriage between Nicki and Fortunat's daughter Cecilia (Zasu Pitts), a rather unremarkable specimen with a limp, but even before any of that occurs, Nicki's narrow options rule his life. However, at the Corpus Christi procession on the streets of Vienna, a pretty young girl named Mitzi (Fay Wray) catches his attention. Their subsequent stare-down - an extended back-and-forth montage of explosive sensuality in which Lieutenant Nicki views his object of affection from atop a horse (a perfect spatial representation of the class divide between them) - marks a sharp contrast to the sardonic tone of the preceding scenes. All playful glances, half-concealed expressions, and small flirtatious gestures, the sequence plays as a real-time progression from lust to romantic interest, and displays von Stroheim's careful way with the depiction of delicate human behavior. When Nicki reveals the crevice between his white leggings and knee-high boots, beckoning Mitzi to insert a flower right in front of her snarling fiancé Schani Eberle (Matthew Betz), the tension, expressed entirely in close-ups, is riveting.

Shortly after Nicki's horse sporadically freaks out and knocks Mitzi to the ground, injuring her leg as if to align her with his prospective wife, an intertitle appears that gets to the core of von Stroheim's worldview: "There is no such thing as an accident - it is just fate misnamed." But here fate is cruel and taunting. The episode allows Nicki to directly apologize to Mitzi in a hospital room, thus beginning a burgeoning romance that will be driven into the ground by the inherited obligations in their respective social structures and by the workings of the plot. Von Stroheim as the bleeding heart romantic emerges from within the cynical, mocking von Stroheim quite fluidly, transforming a social critique into a love story for much of The Wedding March's middle section before resolving into a devastating tragedy. The film's strongest scenes are those taking place at a dreamy garden situated behind the Inn owned by Mitzi's parents, where the two would-be lovers flirt in the moonlight beneath a tree of glowing apple blossoms. These images - corny, artificial, heartfelt, and profound all at once - reap the greatest benefits from hazy, damaged film prints and showcase von Stroheim a visual stylist whose fundamental skills never called for the assistance of sound. 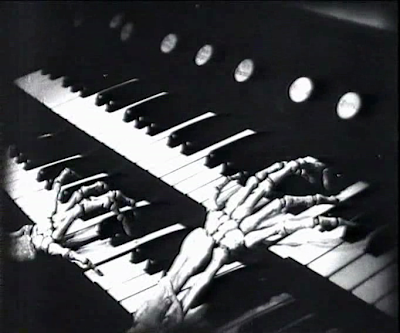 Elsewhere, von Stroheim's knack for conveying emotions and information through visual means works to flesh out any and all subtextual ideas, as if out of fear of not getting across his intentions to audiences. If an idea is not tackled directly through one of the film's many openly sarcastic intertitles, von Stroheim devises a corresponding image, or a corresponding character trait that can be expressed visually. Thus, each character has his/her own odd, minor tic that is made emblematic through repetition: Schani's spitting and the constant tipping of his hat, a minuscule manifestation of all his pent-up anger, which finally is thrown off in a fit of externalized rage; or Ottokar's twisting of the tips of his moustache, a ridiculous effort to keep himself in top form and deflect his ugliness. Also, only a filmmaker shamelessly faithful to the power of the image could include a sight gag as direct as the one during Nicki and Cecilia's wedding ceremony of skeleton fingers pounding away on the keys of an organ, an omen of the spiral of misery and death to result from such a loveless marriage. Or a cipher as bold as the "Iron Man," a large statue that Mitzi claims will come to life and escort her spirit to sorrow and death. The Iron Man symbolizes the rigidness of the social hierarchy, itself a stand-in for the forces that repeatedly threatened the integrity of von Stroheim's work throughout his career.

Already a controversial figure in Hollywood, there's definitely something daring about von Stroheim's casting of himself himself as such a conflicted and ultimately unsympathetic figure. It's as if portraying himself as the instrument of his ideas, to actually go through the motions of a romance shattered by class expectations, was the only way for him feel as if they were adequately represented. Of course, writing his character in as the recipient of so much lavish praise (at one point, Mitzi even tells him "I bet you have a name a kilometre long," and the innuendo is hysterically risqué) helps balance out his character's inevitable fall towards complacency and bitterness, but the lasting note of The Wedding March is tragic nonetheless. The sight of Fay Wray bursting into tears outside of the wedding ceremony as rain dumps buckets on her and Nicki passes stoically with his newlywed is one of the most vividly emotional moments of silent cinema, and it's precisely that kind of poignancy that mitigates von Stroheim's more forceful directorial choices.

Not on topic, but: did you see the Man of Steel trailer? Looked like Snyder aping Malick but maybe it'll kind of work?