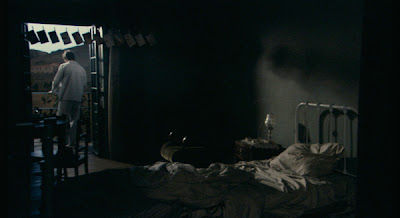 In the pivotal scene of Manoel de Oliveira's meditative, clear-eyed The Strange Case of Angelica, a curious detail emerges. A rural village's only photographer, Isaac (Ricardo Trêpa), is hired to snap a posthumous photo of the recently deceased Angelica (Pilar López de Ayala) in her family's posh, aristocratic hill-top hotel. Much of the photographic act is revealed in the same long shot. At first properly exposed (and indeed relatively dim), the image's highlights are blown out when Isaac requests a new, brighter bulb as a replacement in the overhead lamp hanging above Angelica's festooned corpse. The details in the lamp's cover are suddenly rendered indistinguishable, and parts of Isaac's face become a wash of white. Oliveira, the oldest working filmmaker at 103 years of age, surely possesses the chops to guard against such a "blemish," but he elects not to. In doing so, he problematizes the very nature of image production, calling attention to the materiality of the medium. It's only the first step in an elegant, compact metaphor for cinema itself, for what compels its making and what encourages our spectatorship.

Sure enough, this subtle manipulation of light is only of peripheral importance in the scene; rarely in The Strange Case of Angelica are there not multiple layers of meaning operating at once. More bluntly, the scene's purpose is to incite the conflict weighing on Isaac's psyche throughout the film. Upon peering in his camera's viewfinder, Angelica's eyes open and she bears a wide grin, shocking the already unsettled photographer. It's the beginning of a private pact between the ghostly Angelica and the weary, probing Isaac, which ultimately takes the two of them floating high above the village at night as Méliès-like specters, their bodies seemingly eternally embraced before Isaac is thrust abrasively out of the realm of dreams. Ayala, who enacted a familiar dance of unintentional playfulness and seduction in the similarly backward-and-forward-thinking In the City of Sylvia, taunts Isaac in both his waking and sleeping states, coming alive in his printed photographs and arriving as a glowing black-and-white phantom on his balcony. Often times it is to the unawares of Isaac, who, like a wide-eyed schoolboy, finds his lover disappearing every time he turns around sensing her presence. He is trying to capture that which is not there, that which is an illusion.

Of course, such is the apparatus of filmmaking, wherein celluloid presents images of a lost moment, forever consigned only to the physical medium. (Fittingly, Oliveira lingers on "empty" frames for some time after narrative action within those frames has ceased, quietly combating pictorial transience, the dominant mode in the modern world.) The film invokes a clear sense of Isaac's lineage: a dreamer, a poet, a thinker, a romantic, an introvert, an outcast, a cultural connoisseur, a revolutionary - in effect, a surrogate of the early film director. As such, he is prone to the two fundamental cinematic impulses: that of George Méliès, the grasp for the fantastical and unobservable, and the Lumière brothers, the realist urge. Alongside his compulsion towards Angelica, Isaac is indescribably drawn to taking photos of laborers in the hills, obsessively depicting their pickaxes pummeling into the Earth. Later, he begins following the gyrating gears of a tractor sifting through dirt, snapping as many shots as possible. Glancing over these and other images draped across a string beside his balcony, the suggestion comes gently to the fore: he has created movement. 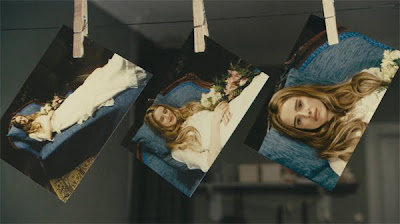 Oliveira, on the other hand, humbly rejects camera movement for the vast majority of the film, preferring to keep his camera - like the Lumière's - a stationary observer. There is supreme formal precision to the film, a fixed understanding of the behavioral patterns within a single rectangular room that is reflected in nearly symmetrical compositions that allow space for multiple planes of action to occur in one shot. The Strange Case of Angelica, however, is not exactly a "room film" in the same way that a Roy Andersson or an Akerman is a room film; Oliveira has constructed a fully realized, hermetically sealed fable world with a firm sense of built-in rhythms and patterns. The film's repetitive skyline cutaways have a storybook quality to them, containing the action within a single community and also reinforcing a temporal linearity. It's fitting that the film concludes on the shot of a woman closing up the boards on a window until the screen goes black, an image that is instantly reminiscent of Satantango. Like Tarr, Oliveira is interested in maintaining a communal narrative and entertaining the many digressions it brings, and when that narrative reaches a conclusion there's no more space for it to live beyond the cinema. Allowing it to exist would mean suggesting a continuity in the cinematic space Oliveira has built, which runs counter to his intentions. Instead, he finds this world, drops in on it in the middle of the night and leaves with it faded to black, preserving its memory.

The Strange Case of Angelica is an argument for the timelessness of images, for the fact that pictures, particularly moving ones, can reflect an immortality that causes the mortal to pine in hopelessness. There are gentle, multifaceted dichotomies at the center of the film - mortality and immortality, life and death, realism and surrealism, past and present - that Oliveira wisely navigates, finally coming to the conclusion that they are irresolvable, that there is no ideal course of action, only an endless tug-of-war between two respective poles. In an act of pure selfishness that is the sum of all those ruminative stares off camera and into the Great Beyond, Isaac eventually implodes with consuming desire for Angelica and commits some unfussy form of suicide, running to the hillside and collapsing before a procession of chanting children. Back in his room under the detached care of a village doctor, Isaac finally succumbs to death in one of Oliveira's most elaborately choreographed, yet entirely modest, long takes. His concerned landlady enters the room, sighing in quiet despair and acknowledging the inevitability. Her sigh is quite like that of the filmmaker, who at such an old age presents with utter clarity a simultaneous fear and embrace of the void, which of course is entangled (as with all great directors) with an awareness of the enduring power of love.
Posted by Carson Lund at 10:20 PM