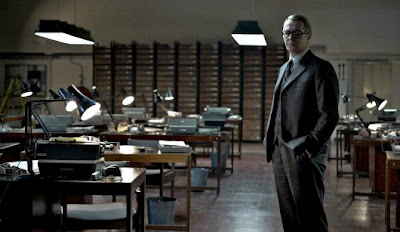 Tomas Alfredson's Tinker, Tailor, Soldier, Spy provides visual evidence of the significant distance between the impulses of literature and cinema. The tension between the two mediums tugs at every frame. There is Alfredson's conflicted relationship with the source material, John le Carré's original novel, the sense of the film paying lip service to the vertiginous strands of plot. Meanwhile, there is an intuitive feel for mood, atmosphere, mise-en-scene, and the various other elements that construct the cinematic world, elements that are somewhat jeopardized, or at least made secondary, when the film indulges a necessary urge to unspool plot. Alfredson has shown a curious propensity for downplaying exposition, for making narrative details and back-stories feel democratically unimportant. In Let the Right One In, this resulted in an intriguingly incomplete sense of the foundation for the characters' histories that effectively complimented the film's spare plot. In a story with such thickness of exposition as Tinker, Tailor, Soldier, Spy, however this low-key approach to dramatic detail is quickly distancing, deliberately failing to provide a base of comprehension as the enveloping mood overwhelms the specific words, behaviors, and conflicts marking the larger narrative design.

And yet, there's so much conviction in the film's construction - its acting, cinematography, blocking, production design, costumes, etc. - that the film remains entirely riveting. Alfredson has so thoroughly sunken into the gritty, unforgiving, desaturated Cold War milieu that his film exudes a sense of being lived in, as if it's a pre-existing artifact rather than something that was built from scratch to approximate a bygone time. Smoke and dust fill the air, splashes of light poke through windows, seemingly important papers and other bric-a-brac cover nearly every square inch of table-top, and faded, garish patterned wallpapers peel slowly off walls. Through these decrepit spaces weathered men in similarly discolored sports jackets brood silently or merely pass by, their perpetual exasperation leaving a bitter taste in the air. Someone in a tight knit circle of British intelligence officials has revealed vital information to a Soviet spy who's now likely running amok with it. Not one man will budge with any revealing news, so semi-retired espionage expert George Smiley (Gary Oldman, who paradoxically never smiles throughout the film) is elected to take the place of the recently resigned Control (John Hurt), who clearly felt significant pressure from all of his somber right-hand men (Toby Jones, Mark Strong, David Dencik, Ciarán Hinds, Colin Firth, Benedict Cumberbatch). 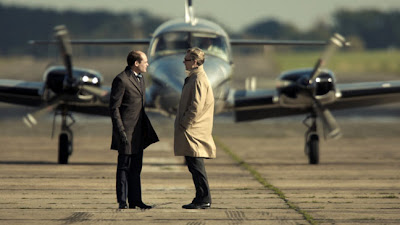 Tinker, Tailor becomes centered on Oldman, a ruthless, uncompromising, and melancholy spy master whose hardened exterior Alfredson refuses to penetrate. Thus, the film's design - insistently paced, nearly inscrutable, and never stopping to check for audience comprehension - mirrors the rate at which and precision with which Smiley ponders his next move. A great deal of the film's major plot progressions are telegraphed not with dialogue but only with Smiley's gestures and sneaking eye movements (for the most part drooped in shadows). When the men do speak, often in long shot or peeped through telephoto lenses, they do so in espionage jargon (Operation Witchcraft comes up frequently), meaning that their political sleights of hand are obscured thickly by code words. As clues accumulate and suspicious men start to behave less and less suspiciously, one suspects the cool disorientation to be precisely Alfredson's point. It is so often in such ambiguous political affairs that the comparatively morally pure outsiders cannot pass judgment on the events because of sheer lack of insider knowledge. As a result, cruel, unfaithful, and insular men are the movers and shakers of a cycle of events that leave innocent people dead.

Alfredson tracks this cycle of events with clinical rigor; if the characters he's portraying are caught in an existential black hole with no escape (Tom Hardy's character is the best example, not known to the audience at first but quickly yanked from reclusion into the narrative), the director himself presents his material with the straightforward duty of an existential anti-hero. Rarely is his camera devoid of modest acrobatics, tracking around rooms slowly and unassumingly, gracefully shifting focus, giving visual attention to every member in a room, equally unsure of who to trust. With the help of the brilliant interior lighting by DP Hoyte Van Hoytema (definitely the cinematographer's finest moment since Let the Right One In) wherein light falls with seemingly malign intent and every lamp and overhead appears to cover only a one-foot radius (the inability to see clearly - what with the smoke and darkness - is often played into the narrative), the film's backhanded maneuvers are utterly enthralling to behold. It is quite simply the best looking film of the year, lovingly designed to recreate its setting and shot with an Ozu's eye for symmetry and indoor details. The film only grows more confusing as it presses on, but the mood of enveloping doom and sadness surrounding Oldman's compulsive workman expands. Rarely has being out of the loop felt so engaging.
Posted by Carson Lund at 6:27 PM