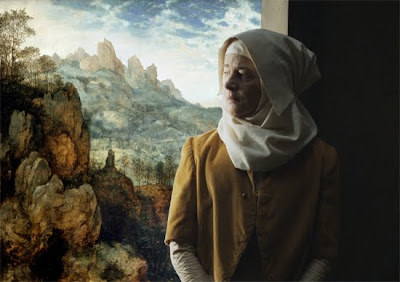 It has become an increasingly rare occasion to be able to use the word "original" or "unique" with utter sincerity when dealing with a work of art these days, a trend attributable more to the generally clever recycling of forms and narratives as well as the oversaturated proliferation of media than it is to any (nonexistent) widespread dearth of inspiration or imagination. Lech Majewski's latest film, The Mill and the Cross, however, proves the exception to that rule. It's the kind of mysterious creation that fully, coherently, and convincingly erects its own hermetic and uncanny world that exists only for the duration of the film proper and subsequently enlarges in memory. It belongs to a special league of films that include Werckmeister Harmonies, Eraserhead, and The Cook, The Thief, His Wife, and Her Lover. This kind of spellbinding world-building does not always lead inexorably to a great film, but it nonetheless represents an exalted category of filmmaking: the ability to conjure a world that seems, at least superficially, to operate according to the laws of our own yet simultaneously feels alien and fantastical. And Majewski's film is so mystifying because it manages to take something so earthbound - Peter Bruegel's famous painting "The Way to Calvary" and the historical events surrounding it - and succeed in infusing it with an overpowering sense of the surreal.

Majewski, who has dealt with famous paintings and painters in his work before (The Garden of Earthly Delights most notably), canned the project's original conception as a traditional art history documentary to instead dive into the world in which Bruegel lived. The result is a loose, free-form exploration of the Flemish milieu and the people who inhabited it, all placed inside the context of Bruegel himself (Rutger Hauer) conceiving, planning, and painting his epic panorama, "The Way to Calvary." In charting the mundane labor of various townspeople - the miller perched high atop a forbidding rock formation, Bruegel's wife and children, the Virgin Mary (Charlotte Rampling), and various peasants and Shakespearean simpletons - as well as the devastating turmoil caused by the Spanish rejection of the Protestant Reformation, Majewski employs a languid, observational style, his unpredictable structure mirroring the slow roving of the eye across any number of Bruegel's famously packed compositions, overflowing as they were with unrelated mini-stories. Despite the sheer scope of the narrative collage, however, The Mill and the Cross maintains a light, ethereal quality even in the midst of watching red-coated conquistadors brutally torture and hang those who actively opposed Spanish rule, Jesus among them. This is a deeply spiritual work, borne from the self-imposed calm of the artist quietly observing and reflecting his surroundings.

I would probably break my back trying to describe the myriad ways in which Majewski delicately conjures the religious and political upheavals of the time and makes a case for their profound influence on Bruegel's work, but that's probably best left to a historian. I was struck most by Majewski's typically jaw-dropping approach to the material. His body of work continues to be marked by drastic technological and artistic innovations, including the 33-short-films-within-a-film approach of Blood of a Poet and the hand-held digital of The Garden of Earthly Delights. But here, Majewski takes his biggest leap yet into the domain of digital layering and CGI while keeping the painterly, tableau-like blocking of much of his work intact. The landscapes in The Mill and the Cross are composites of pieces of Bruegel's original painting and various nature footage captured on a Red One (clouds, trees, rocky mountains), creating a startling hybrid of real and unreal planes that recalls Powell and Pressburger's Black Narcissus (one recurring image of the God-like miller peering down upon passersby is instantly reminiscent of that film's celebrated money-shot) but goes even further in the pursuit of three-dimensionality, thinking of a backdrop not just as one homogeneous surface but rather as a compilation of many different visual elements. It makes The Mill and the Cross infinitely pleasurable to gaze at, as well as - with the exception of one digital "camera movement" during the film's impressive 4 1/2-minute choreographed shot of the collective procession towards the Crucifixion - gloriously free of the ugliness that plagues so much contemporary post-production gimmickry. 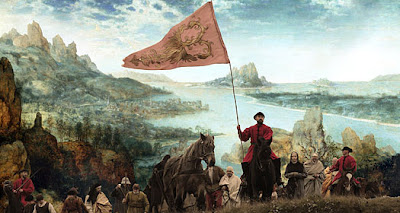 Majewski acted as co-cinematographer on the film along with Adam Sikora, and the two of them showcase an innate grasp on the quality of light in Renaissance artwork. A single source of hazy outdoor light creeps through windows to flood dusty, wooden interiors, while bare bodies tend to be encased within a soft, amorphous glow, as if brighter paint were bleeding into the dark tones of the background. This light achieves a mystical, fable-like aura, culminating in Majewski's irreverent rejection of established codes of lighting continuity by occasionally using two sources of light in one shot: that of the sun and that of the holy spirit. The film also has a special feel for composition; among plenty of iconic images captured in The Mill and the Cross, Majewski and Sikora watch two peasants climbing up a steep precipice before a majestic landscape, a mill-worker ascending his cavernous dwelling towards the light of day, two imposing gears churning like molasses in the darkness, and a group of toddlers roughhousing in their claustrophobic domestic environment, one of them cementing the timelessness and rootlessness of the armpit fart. One of Majewski's key compositional motifs is the vertical angle, underpinning the constant presence of divine observation.

In a film so heavily reliant upon the visual, peripheral aspects (narrative, sound design, acting) take a backseat in terms of emphasis, but Majewski's equally careful in dealing with each. The film's minimalist, but nonetheless multi-layered narrative, actually comes to a harmonious crescendo towards the end of the film, with each of the individual characters appearing in the massive gathering that inspired Bruegel's painting. Majewski makes no attempt to round out the stories or to bring them some sense of closure, instead preferring to subsume them into the whole and imply a cyclical movement of individual and environment. In fact, in some ways The Mill and the Cross is reminiscent of Tarkovsky's epic on painter Andrei Rublev, in that it divvies its attention up to fragments in the lives of the people surrounding the artist in question in an attempt to reflect the social inspiration that guided their work. The film's soundscape is similarly democratic, and incorporates the same principles of sampling inherent in the visual design. Combining both diegetic and non-diegetic sounds atop snatches of whispered voice-over by Rampling and periodic inserts of Józef Skrzek and Majewski's pensive, operatic score, the film pares down its aural world into something of sparse, creeping dread, occupying yet again an unsettling middle ground between the real and the unreal. This tension between a faithful representation of Bruegel's universe and something more detached is perhaps the ideal way for Majewski to impose his own singular vision onto a piece of art that is itself so exalted, influential, and majestic.
Posted by Carson Lund at 8:07 PM