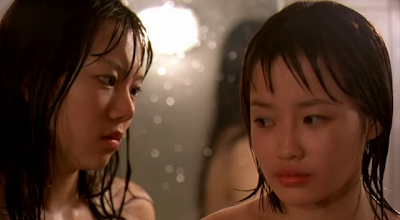 Historically, Samaritanism is defined not by the geographical association with Samaria but by the Hebrew term Shamerim, which means "Keepers of the Law," and refers to the conservation of traditional practices. There's a great deal of law-keeping going on in Kim Ki-Duk's Samaritan Girl: policemen encroach on instances of prostitution, a father distributes humiliation and pain to a variety of sexual offenders, an innocent passerby frantically calls 911 when he sees a bloodied and mangled man lying on the floor of a bathroom. The most unsettling implication of the film's alleged Samaritanism, though, is the idea that the director is the ultimate "keeper of the law," and that the "law" is of his own devising. We rarely think of cinema as a pedantic tool of justice, but Kim has singlehandedly with Samaritan Girl attempted to make a case for the director as policeman. But how do we trust a law-enforcer who's Buddhist one minute (Spring, Summer, Fall, Winter... and Spring), nihilistic the next, and all of a sudden Samaritan, not to mention one who erratically shifts his values in the middle of a day's work?

Samaritan Girl is a whopper of an odd and discomfiting film, confusing justice with oppression, progress with backwards conservatism, control with love, and vengeance with enlightenment. It's divided into three sections: Vasumitra, detailing a naive young prostitute named Jae-yeong's (Yeo-reum Han) attempt to emulate her idol, the ancient, titular prostitute who supposedly made all her clients lead Buddhist lives; Samaria, which watches as Jae-yeong's best friend Yeo-jin (Ji-min Kwak) commemorates Jae-yeong's early death by sleeping with all her old clients and returning their money, all while Yeo-Jin's father Yeong-ki (Eol Lee) angrily pursues his daughter's victims; and Sonata, wherein Yeong-ki brings his daughter to the countryside with ambiguous intentions. Each part is brimming with its own ideological contradictions and contrivances. For instance, what is Yeo-jin's tribute of following in her friend's footsteps if not a reinforcement of the same troubled aversions to connection and meaning that she despised in her friend? Why does Yeong-ki act so proactively on his daughter's behalf but display no tangible affection for her as a daughter? The final third of the film desires to say something about the reemergence of the family unit, but don't Yeong-ki's illusions of pastoral simplicity expose his similarly puerile attitudes towards family and love? 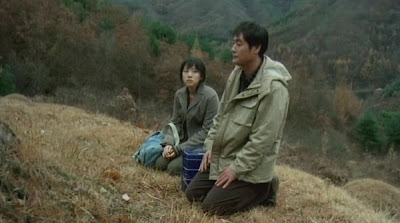 There are answers to these questions - indeed pretty obvious ones - but Kim is unaware of them, and equally unaware of the deeply chauvinistic patina of his work. Yeong-ki avenges his daughter's exploitation not because he genuinely seeks to align social equality but because he fears her sudden agency and wants to reaffirm his position as a stern, autocratic father. Instead of disavowing an awful imbalance in social mores, he simply realigns them to fit his equally nonsensical vision of patriarchal dominance. Kim's emphasis is not on the justice over depravity but rather on the brute masculine force of vengeance, revealing that his true concern is not egalitarianism but the idealization of the male. Fittingly, Kim litters the film - really, plenty of his films - with blunt phallic imagery. It's usually a popsicle or a corndog or some such food on a stick (and the perpetual sucking is just one example of erotic fantasy), but these more blatant surrogates spread the thought of sexuality to any other image remotely indicating a narrow cylinder. Most bombastically, during Yeong-ki and Yeo-Jin's day trip to the countryside, the sensual consumption of hot sweet potatoes leads right to an overhead shot of the two sitting on a canoe, their bodies facing ahead along with the forward-thrusting shape of the male.

Kim's women are endlessly stubborn and resigned, and they tend to stay that way throughout his narratives. His men are always looking for ways to "purify" them, to return them to a state of total submission. Note Yeong-ki's murder and subsequent burial of his daughter by a lake; it is there, in the tranquility of nature (itself a stand-in for regressive purity), that he can finally cease to worry about her threatening his control. Granted, the scene is "only a dream", but it seems a dream that Kim is waiting for to bleed into reality. In fact, the whole film is a dream, a dream of how Kim wants his society to be, with teenage girls always naked and homoerotic in their private time, men always searching for a quick way to assert their power, and families always disillusioned and criminalized without the grip of a father. Sure, he may disapprove of prostitution, but he is fond of a quieter, more invisible form of masculine domination. The simplest offense of all - and the area where Kim has been able to trick the international art cinema crowd - is that he's a clumsy, pedestrian filmmaker, cutting when he doesn't need to cut, punctuating when he doesn't need to punctuate, and aiming for emotions that miss the mark. If the audience is supposed to feel empathy when Yeong-ki's stuffs his face with sushi and subsequently throws it up to the tune of a sappy piano melody, something is severely off-kilter.
Posted by Carson Lund at 9:02 AM