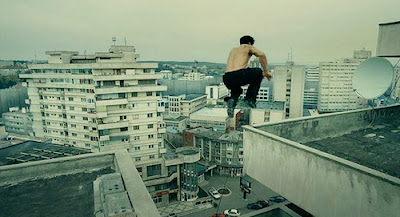 A concept such as a “Gatekeeper Auteur,” as outlined by Leon Hunt in his book East Asian Cinema: Exploring Transnational Connections on Film, is less a useful critical term than a vague and pedantic categorization. Hunt uses the term to refer to Quentin Tarantino and Luc Besson, two Western director/producers – one American, the other French - who are “attuned to cults surrounding Hong Kong, Japanese, and South Korean cinema” and end up “displaying their connoisseurship of Asian cinema” in their films. Tarantino is the more flagrant and unapologetic of the two, as well as the figure that is seemingly less at fault, while Besson reveals his fanboy status through allegedly invisible appropriations. For instance, the agile street fighting and urban parkour of Besson’s Banlieue 13 shares a kinship to Chinese martial arts, while Tarantino’s much-lauded Kill Bill series has an aesthetic field day with the Shaw Brothers, Yakuza films, Seijun Suzuki, Bruce Lee, and Takashi Miike, among countless others.

The more one digs into the surfaces of Kill Bill and Banlieue 13, however, the less they really seem to represent any sort of binary representation of Asian cinema influence. To what extent are Tarantino and Pierre Morel (Besson’s hired director) really operating on different ethical planes? How is Morel’s borrowing of a twice-recycled tagline recipe (“No Wires, No Special Effects, No Limits”) not a blatant admission of homage in the way of Tarantino? How is it fair for Tarantino to overflow his film with snatches of canonical influences whose specificities are likely to fly over the head of the majority of the target demographic and unfair for Morel/Besson to take the lesson of no more than one Asian reference point (the Kung-Fu street fighting of Ong-Bak) and let it billow to the surface only sporadically throughout the course of an entire film? (That David Belle’s pectorals remain elegantly exposed for much of the running time isn’t enough to concede Bruce Lee theft). Both directors seem to take sly advantage of their viewers - merely a fraction of which probably have any clue what’s being plundered – to present images and forms that fly as “homage” to one crowd and as “originality” to another. 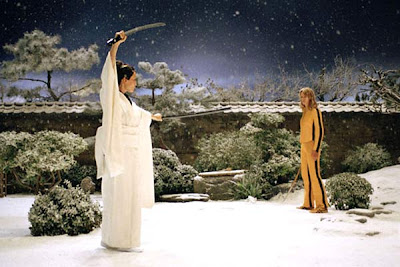 Either way, there’s a long lineage of artistic borrowing that the directors are continuing here, a trait that hearkens way back to the earliest practitioners of motion pictures and even beyond the cinematic medium itself. Hunt problematically seems to draw the line of acceptability at this notion itself rather than at the particular modes of borrowing the filmmakers indulge in, as if to suggest that most American narrative cinema since the 1930’s is somehow “Russianized” because of its indebtedness to Eisenstinian montage, or that Godard is a phony because of his regurgitation, and simultaneous commentary on, a hodgepodge of global cinemas. Artistic recycling may be erroneous in the case of Morel/Besson and Tarantino, but it is so for different reasons, none of which include the mere fact that they are resorting to Eastern media consumption as influence.

It is a crucial distinction here that Tarantino is unabashedly honest and borderline arrogant in his film-literacy while Morel/Besson are more populist and unassuming in their ambitions. Nearly every shot and every sequence in Kill Bill is spiritually tethered to a similar moment in a marginalized (by Western standards) Asian Kung-Fu film, yet Tarantino’s ultimate resignation to “Orientalist tropes of impenetrable psyches and exotic otherness” betrays his appreciation. This is one area where Hunt nails it, discussing how Tarantino can only "have Asian" and not "be Asian." Morel and Besson feel no inclination to loudly proclaim their idolatry, instead disguising their influences in the comparatively unique French habit of parkour, which is questionable in an altogether different way. They, on the other hand, "have Asian" without seeming to desire to "be Asian", preferring to morph to their own context. The “right” thing to do here – that is, the approach that yields the greatest degree of respect and admiration and the lowest levels of hasty exploitation – is perhaps somewhere in the middle.
Posted by Carson Lund at 9:02 PM