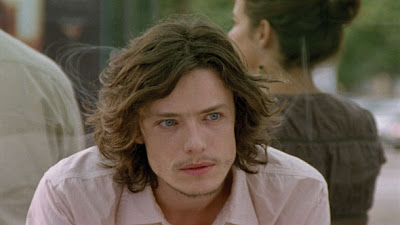 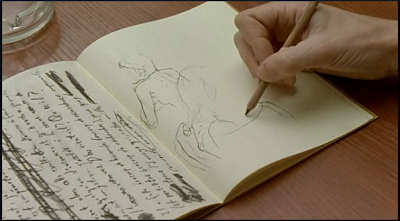 Consisting of a man, an audience surrogate, sifting through beautiful French passersby on a lazy summer afternoon in Strasbourg, Jose Luis Guerin's In the City of Sylvia is a heterosexual male fantasy executed with the patience and precision of a private investigator's video tapes. I'm being tongue-in-cheek, of course, because the film doesn't possess the kind of perversion of the male gaze that such a description would suggest. What is does do is accurately convey the loneliness and romantic desire of an adrift artist seeking companionship in a foreign city, an act of voyeurism that gently comes to mirror the filmmaker's search for a subject, as well as the viewer's search for meaning within an onslaught of daily visual and sonic stimuli. It's about an unnamed man (Xavier Lafitte) silently probing the female public for a so-called Sylvia, a woman from 6 years prior that he had a memorable night with at a bar called Les Aviateurs, but the tip-off to this plot detail - ultimately the entirety of the film's narrative content - is not revealed until more than halfway through. So until this realization, the man's pursuit is shapeless and abstract, the only proof that he's looking for anything at all being the numerous sketches of slightly varying women that he keeps referring to in his notepad.

Therefore, divorced from defined narrative purpose, In the City of Sylvia returns the cinema to its earliest practice of unmitigated observation, in the process drawing attention to how much our quotidian lives are spent merely watching life unfold around us. The film is broken up into two major set pieces bookended by shorter scenes of the protagonist's untethered contemplation, the first of which is a prolonged, deceptively simple episode of the man's perusal of various women at an outdoor cafe we later learn is associated with the Drama Conservatory, where Sylvia was allegedly studying. Guerin resists the urge to impose much action upon the nearly thirty minute sequence, instead simply watching the wordless ping-pong of glances between cafe patrons. Lafitte, with his notepad and his beer, is patiently perusing the crowd, staring at the unself-conscious expressions of women without the faintest hint of sexual predation. Rather, with the help of his sketches, he's trying to put form to an amorphous memory. Guerin compensates for the film's bland technical craftmanship (it's as if a bounce card was the only tool for illumination, resulting in a lot of flatly lit faces) with placid and subtly tricky compositions that play with ghostly juxtapositions of foreground and background, placing heads in compositional relationship to one another despite their differing depths in the frame. The effect is a fragmented facial collage, suitable to the uncertain recollections of Latiffe's hopeless romantic.

Finally, after changing seats to get a new angle, he sets his sights on a slender brunette (Pilar López de Ayala) and takes it upon himself to follow her throughout the city, attempting to decide with some certainty whether or not she's Sylvia. The ensuing chase sequence plays like what Before Sunset would have become had Ethan Hawke been too afraid to approach Julie Delpy, and other times, particularly when Guerin indulges a delicate undertow of physical comedy (the man's compulsive spilling of drinks, his bumping into various objects), like the time-stretching of a Jacque Tati gag about the confusion and isolation of the contemporary urban labyrinth. (Guerin finds enjoyment in the multilayered wide shot made possible by the cobblestone back alleys of Strasbourg, transforming Latiffe into a curious lab rat with a perpetually shifting end goal.) But of even greater interest is the fact that the whole sequence - and much of the film, for that matter - is without dialogue and told in the primal visual language of silent cinema, which makes it tempting to view it as the modern update to F.W. Murnau's similar boy-chasing-girl work, Sunrise. Both films include a bittersweet scene on a moving tram (here, it's Latiffe's eventual meeting and hesitant exchange with Ayala), and both use their visual repertoire to evoke both the subjectivity of their central characters and the occasional omniscient perspective, a mysterious third person that can naturally be linked to the audience. 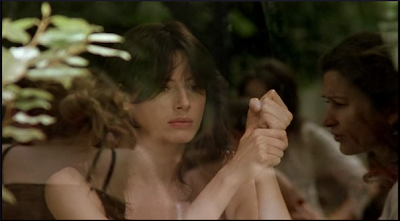 Guerin seems to have deliberately fashioned his film in such an open-ended manner so as to invite these decade-spanning cinematic associations. Because after all, In the City of Sylvia proves to be in its own quietly self-referential way about the experience of watching and making movies. Latiffe, suggesting an androgynous Renaissance painter with his flowing long hair, skinny mustache, and loose, unbuttoned long-sleeve shirt, compiles the various physical features of the women around him into his notepad, hoping to concretize the vague impressions in his mind, much like the slow process of mental images into scripts and ultimately cinematic images. Moreover, it gradually becomes clear that what he's searching for is not necessarily The Sylvia (although it does begin that way), but rather The One; this is a sneaky stand-in for our own goal-aspiration processes, which often start specific and wind up broad and redefined. Latiffe approaches Ayala and discovers not only that she is not Sylvia, but also that she has been aware of his following her for quite some time. He instinctively feels awful and lets his feelings of shame and regret overshadow any attempt to get to know this women who he has clearly been infatuated with regardless of her identity.

Ayala's character slips out of the back of the frame when she exits the tram in a wide shot that Guerin returns to two more times and uses as his final image, converting it now into a metaphor for missed opportunities. But it remains ambiguous as to whether or not Ayala makes a presence in the film again. In one of Guerin's several compositions to make stunning use of reflections and multiple planes, Ayala shows up unexpectedly as a specter laid across the reflective glass of a moving tram seen from Latiffe's perspective, coexisting with the (real or imagined) bodies of various other women boarding the tram or in the nearby area. Is she really there waiting to get onto the tram, or has the romantic metropolis shattered itself into a space of both facts and illusions? Latiffe's object of desire has expanded, fragmented, and reshaped itself, and the city that was once a habitat for one Sylvia has become a place bearing countless Sylvia's, countless opportunities for romantic involvement. He doesn't realize this instantly, or else his enigmatic hookup with a random girl from the bar - shot by Guerin in the tantalizing low light of his hotel room - wouldn't have been so unfulfilling, but perhaps by the end of the film he has come to terms with the absurdity of his quest. If not, he can only get as far as his notepad, nowhere near the heights reached by Guerin's seemingly slight film.
Posted by Carson Lund at 10:42 PM

Hehe loved the Ethan Hawke/Before Sunrise alternate theory. This movie was astonishing all over, it's like Antonioni meets Hitchcock.

this is my most favorite film. :) it echoes bresson's 4 nights of a dreamer and hitchcock's vertigo! you should check the movie's companion piece - Unas fotos en la ciudad de Sylvia. it is more beautiful and poignant than in the city of sylvia.

Jose,
Thanks for the comment! Antonioni meets Hitchcock is an apt way to put it, although Guerin certainly doesn't shoot for the kind of suspense-building that Hitchcock is interested in, even while he does share the thematic concern of voyeurism and the male gaze. Also, despite the similarities between Antonioni both stylistically and subtextually, the more I think about it the more it seems Guerin's embracing what amounts to the opposite of alienation. He's celebrating the abundance of difference in society, the amount of options that one has for interaction. Antonioni is usually looking at the ways that people become disconnected from themselves and each other.

Scarereyes: I haven't seen 4 Nights of a Dreamer yet, but I'll have to check it out. Coincidentally, I'm on something of a Bresson kick lately.

I checked out the companion piece on the DVD and wasn't very impressed. I shut it off after a few minutes, but then again, I had just watched the film, and didn't really want to commit myself to a wordless slideshow documenting Guerin's inspiration.

I just love reading film blogs because I always discover new ones that are fantastic and so, my list keeps adding new titles. Thanks for the review, I will try to see it soon!