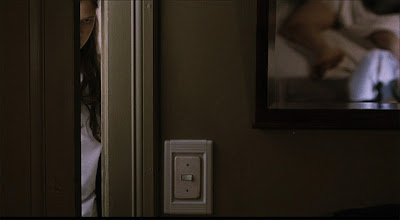 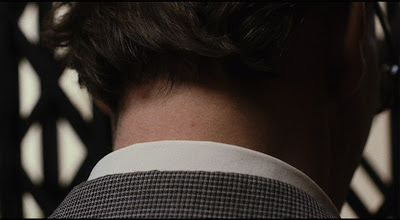 In Lucrecia Martel's world, seedy scenarios are established only for them to taper off gradually while their psychological repercussions echo in the minds of her characters. In her 2008 film The Headless Woman, that axis point was a potential killing, and in her previous work, the heady and discreet The Holy Girl, it takes the form of a middle-aged doctor's public molestation of the adolescent of the title. Martel's interests lie not in observing the precise results of her central mysteries but in examining the confused psyches of her characters who are forced to make some sense of actions that appear senseless and integrate their repressed feelings of guilt and disorder into functioning everyday life. Fittingly, her films take place in unmistakably public places so that there is no escape from social situations, thus amplifying the clash between fleshy instincts and intellectual affectations. For Amalia (María Alche), a young catholic school girl who lives in a spacious, unwelcoming old Argentine hotel with her mother and hotel owner Helena (Mercedes Morán), an attempt is made to tie her victimization to her religious coursework while simultaneously hiding the particulars from her classmates and her family. For Dr. Jano (Carlos Belloso), an Otolaryngologist at a medical convention in the hotel, his central act of indecency must be shielded from an entire legion of colleagues as well as Helena, whom he quickly threatens an adulterous relationship with much to the ignorance of her connection to Amalia.

Martel relishes the tricky task of balancing several narrative threads throughout the film: Amalia's evolving relationship with her best friend Josefina (Julieta Zylberberg) with whom she shares typically girly pastimes but also a growing sexual curiosity, Dr. Jano's flirtation with Helena and casual treatment of her mild tinnitus, Amalia's persistent stalking of Dr. Jano (the true purpose of which is the film's intriguing perplexity), and several other minor subplots, from the vaguely incestuous relationship of Helena and her brother to Josefina's attempted, but ultimately unsuccessful, denial of pre-marital sex with her boyfriend. As in Antonioni, theme, rather than plot, dictates rhythm, and as such Martel hurdles unexpectedly between undercurrents of shame, sexual desire, gossip, guilt, and the supernatural. Further associating disparate elements is the idea of vocation, which is differentiated by its Catholic application ("God's call" as discussed in Amalia and Josefine's classes) and its practical, common application (a person's job or position in life). If Dr. Jano is a medical healer who betrays his best intentions by defiling Amalia, then Amalia sets out to be a spiritual healer when she chooses not to spill the information about Dr. Jano in favor of an intended religious salvation.

Or is this her intention? The word "mission" is uttered obliquely numerous times by Amalia to Josefina, which would suggest that Amalia has taken it upon herself to heed God's call in delivering Dr. Jano from sin, but it's easy to surmise that there's something else on her mind when she quietly lurks the hotel premises, deliberately placing herself in physical proximity to him seeking brief contact. Was she perversely attracted to Dr. Jano's understated rubbing of his crotch against her behind in a public gathering where a street performer was playing a theremin? Is she trying to tease out repeat encounters? Or is she merely taunting him, making him truly feel the gravity of his actions? Martel makes it clear elsewhere that these girls are capable of immaturity, gossiping disruptively in class about the teacher's (Mía Maestro) out-of-class romantic affairs, so the latter wouldn't seem far out of line. 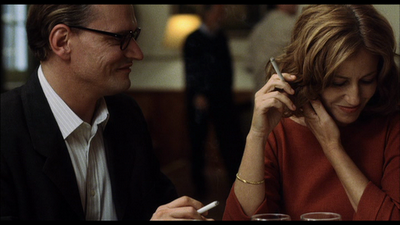 But sexuality and violence are also at the forefront of their imaginations, and indeed menace emanates from the film like an animal looking to angrily burst from its cage. One mesmerizing, tension-filled sequence whips the camera around frantically in heated anticipation of danger as the girls frolic cheerfully through the woods (almost identical to the woods in The Headless Woman) trying to discover the source of gunshots. As if to cement their careless flirtation with death, a pair of hunters jog through the back of the frame at the very end of the scene. Later, a naked man falls from a window right outside the girls' classroom, barely surviving, after which Martel makes a brilliant cut to Helena's frozen, sleeping body. Amalia places her hand in the air over her back and wakes her up, momentarily borrowing the mysticism of the theremin player. These and other mysteriously troubling occurrences pile up throughout The Holy Girl, lending a premonition of an inevitable explosion. However, this explosion never comes, and the tension keeps elevating until it's unbearable in the final shot of Amalia and Josefina calmly doing backstrokes and whistling to themselves in the dilapidated hotel pool, a potent image of vulnerability. Martel's cinema radiates the sense of multiple things going on just outside our and the characters' consciousness(es), just beyond comprehension, which keeps her films at a near-constant level of anxiety, although it's never quite clear how much of this feeling stems from concrete reasons within the film and how much is just a psychological effect she is able to conjure in her characters in an attempt to accurately reflect their jostled and transient states.

Much of this uncertainty has to come from Martel's totalizing, exacting audiovisual approach, which combines decidedly fragmentary compositions, aggressively elliptical editing, and atmospheric sound design. Few directors today pay as much of obsessive attention to both every square inch of the frame as well as the entire space beyond it; when it comes down to it, Martel ultimately creates environments rather than a space for single scenes, choosing deliberately to visually fragment the space as if to set herself the challenge of expanding the world beyond the frame as much as possible. And yet, for all this pedantry, few directors are also able to suspend the kind of magnificent distrust of the cinematic image that Martel fosters. The surfaces of The Holy Girl seem self-contained, natural, diegetic, yet given microscopic inspection one uncovers sounds sneaking into the mix that seem to have no business being in the particular scenes they're in (or at least not at such a volume). Martel's distinctive manner of framing - filming entire scenes in close-ups, shooting from behind necks, cutting off essential body parts, choosing to let the speaker in a conversation be the character in the blurred background rather than the arbitrary figure in the foreground - is a way of throwing off the comfortable balance of a narrative, as is her radical cutting techniques, wherein an unshowy, seemingly in-scene cut can and often does signal a drastic leap in time and even place.

I certainly haven't comprehensively figured out The Holy Girl on a subtextual level, but it's clear enough that Martel is a highly experiential filmmaker whose evocative works - perched somewhere between the cerebral alienation of Antonioni and the sensuousness of Denis - tend to fly in the face of rational interpretation. That there are moments here of startling truthfulness, however, in which the behaviors of characters seem silly from a logical standpoint but emotionally dead-on, appears to suggest that Martel has elevated her unique examination of human nature to a level of artistry divorced from language. The Holy Girl isn't uniformly breathtaking (a few scenes of casual interaction between Helena and various hotel workers feel middling in spite of their perfectly realized sociological tensions, drawing the attention away from the strongest dramatic areas) but when it manages to fulfill its destabilizing vision of burgeoning sexuality competing with religious and social conventions, it does so in striking and inexhaustible ways.
Posted by Carson Lund at 10:25 AM