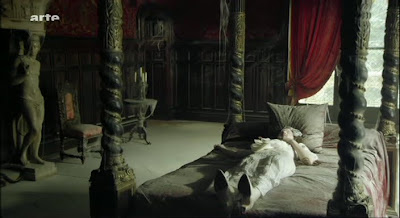 Catherine Breillat's deliriously bizarre The Sleeping Beauty is so full of unforeseen twists and turns and radical lurches in tone that it suggests being written by its many child performers. Of course, it was written by Breillat herself, inspired by Charles Perrault's original fairy tale as well as some sprinklings of Hans Christian Andersen's "The Snow Queen", but its severe narrative fragility feels purposely concocted, an attempt to get inside the mind of a naive and undisciplined child telling a story. Yet, ever so sneakily, Breillat imbues it with her characteristically clever inquiries into sexuality, gender, and coming-of-age, and suddenly the film's text and subtexts become thoroughly unrecognizable from each other. It's difficult to imagine a film in recent memory where the conceptual grounding is so cast off and hidden from the actual cinematic surface, which is bulky and cantankerous here but ultimately leads to something wise and thought-provoking. As such, the film is somewhat preferable in hindsight, where its rambling kaleidoscope of images, mini-stories, and fairy tale allusions can be sorted out in the confines of a more logic-oriented brain.

A profound rupture in typical narrative cause-and-effect is signaled immediately when Breillat begins the film on a garish close-up of an evil old woman cackling as she cuts the umbilical cord of Anastasia (Carla Besnaïnou) only to interrupt it abruptly with a jarring shot of three naked witches bathing in a stream. This old woman has giddily decided, for reasons undeclared by the script and perhaps simply nonexistent in Breillat's sordid and uncanny world, to penalize Anastasia with a death sentence at age six, and it's the job of the younger witches to find a less harsh treatment. They decide on making her sleep for 100 years, during which she will only age 10. When she awakens in the dust-encrusted emptiness of the palace, she will be in a different era, marked only by her nocturnal visions. It's a broad, open scenario, one that allows Breillat to freely traverse time periods, levels of consciousness, and geographical regions without necessitating any conventional causality. To write oneself into a free-flowing dream is to open up limitless possibilities, which can either conveniently expand (and simplify the process of) a writer's creativity or massively hinder it.

Breillat seems to land somewhere in between these two authorial outcomes. The Sleeping Beauty is both distinguishable for its termitic dives into unexpected territory and its frequent exploitation of Breillat's imagination. After establishing a hyper-awareness to the linear march of time - Anastasia lounges in a mahogany armoire surrounded by miniature clocks and later stares entrancingly at the back-and-forth of a pendulum - Breillat shatters temporal authenticity, leaping into a dreamscape wherein an understated cut can jolt the timeline from a 60's backwoods community to a 16th century kingdom, or from a timeless Arctic tundra to an amalgam of ancient BC, Victorian Era, and the contemporary world. A wide-eyed and carefree Anastasia traverses through these landscapes meeting a whimsical array of characters: a hideous cave-dweller who forces Anastasia to gamble with her life in a primitive game of bowling, adolescent albino royalty who first threaten to kill her and abruptly become friendly, a young gypsy princess who conflates violence and sexuality, and a ballistic eskimo shaman, among others. The film's key episode is a zany, Maddinesque evocation of hormonally charged childhood in which Anastasia drops in on a mother and her son Peter (Kerian Mayan) and finds herself an unofficial third family member sharing vaguely incestuous affection for Peter. Peter's subsequent Oedipal-tinged, puberty-fueled escape from domestic living provides the heartache that influences Anastasia's goal of finding him, an urge that dominates the rest of the film. 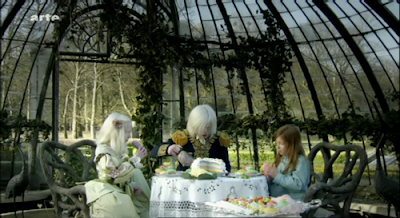 The splintered, episodic nature of the narrative is mostly devoid of restraint, with Breillat simply throwing everything at the viewer in an arbitrary pattern that is suitable to the rules of a dream but fails to offer the refinement and poise she has shown with other recent work. At about the point when Anastasia sets off on her journey for Peter and exits a ghost train in an uncharted land full of ominous mannequins and a redundant midget, The Sleeping Beauty has lost nearly all of its dramatic momentum, becoming an arcane and free-associative dream that lacks an emotional clarity that the flat, sleepwalking Besnaïnou - in her woolly get-ups and royal dresses that look like they were acquired in the bargain section of the Hello Kitty store - is unable to bring. Deadpan sight-gags are occasionally sprinkled into the mix, such as the shot of a motley crew of gypsy servants stumbling down a hill towards the scene of a grisly murder, or the sight of Anastasia confidently tossing a skull into a pile of bones beside a blood-hungry ogre, but more often than not Breillat's fairy-tale skewerings gesture towards the trashy and obscure (a seductive snow queen greeting Peter in his dreams, a vulgar expression of the Northern Lights as Anastasia endures her Sisyphean search beneath) rather than the truly mysterious.

Retrospectively, however, this nonsensical illogic seems part of the point. Breillat's aims start to come into focus in the third act of the film when Anastasia dies in her dream and wakes up from her hundred-year nap. Her 16-year-old self (Julia Artamonov) is plagued by longing and sexual mischief as she does circles around a slightly older boy named Jacque (David Chausse) who bears a close resemblance to the young Peter (perhaps family and romance are not so mutually exclusive?). Their interaction is marked by playful starts and stops, with the touchy-feely impulses always tempered by early adolescent sexual anxiety. Breillat's framing device cannibalizes the entirety of Anastasia's upbringing and turns it into a murky dream of violence, camaraderie, sexuality, familial trauma, bisexual curiosity, jealousy, rage, and adventure, which, from a psychoanalytic standpoint, seems about right. The countless motivations, experiments, and realizations of childhood cannot be rationalized or disentangled, and the myriad of external influences to the youthful psyche are diverse and unending. When Breillat concludes her film unexpectedly on an image of Anastasia's ripped hosiery beside Jacque's scraped back, it's not only a comical hint towards the offscreen virginal sexual encounter between the two, but also a metaphor for the permanent scars of childhood, the last remaining trace of the inscrutable chasm of emotions that lead to the maturation of a human being.
Posted by Carson Lund at 8:52 PM