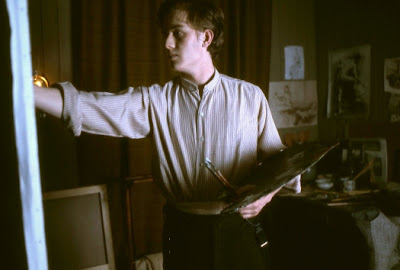 Peter Watkins' Edvard Munch so thoroughly intermingles the tenets of drama, documentary, and experimental cinema that it ultimately obliterates all three, becoming an undefinable artifact of artist autobiography, social critique, and visual poem. The film springs from the consciousness of the titular Expressionist painter with the same kind of all-encompassing grandeur of Andrei Tarkovsky's Mirror (or more recently, Terrence Malick's The Tree of Life), yet its own fragmented, vérité style is distinctly different from those works. What it does share is the sense of an interior life being sprawled out in cinematic images despite the scant and enigmatic presence of that person in the film itself. Geir Westby, a Norwegian non-actor like everyone else in Watkins' epic, plays Edvard Munch, a tortured artist born at the wrong time and in the wrong milieu, fighting to maintain his artistic license and his sanity. He brings an off-kilter, ghostly quality to the painter, barely speaking and frequently staring directly at the camera with his dark, sad eyes, much like the distorted and spiritually distressed figures in his paintings. When he's not attempting to imbue the same artistic pedantry of his subject into the very form of the film, Watkins is probing Westby from the outside in, peering into his soul like a member of Munch's bemused and hesitant audience.

More so than any other artist biography I've seen in the film medium, Edvard Munch demonstrates how the political and social upheavals of one's life inform the ultimate trajectory of one's artistic output. Watkins, a left-wing filmmaker dedicated to proving that all cinema, all stories, and all reproductions of life are inherently politically engaged, has such an intelligent grasp of the codependency of the political and the personal that not a single scene passes without a level of involvement in both. Munch grew up in the Norwegian towns of Oslo and Kristiania in the heart of a puritanical bourgeois society in the late nineteenth century, a passage of his life that comprises the first third of a nearly three-hour film that roughly, but never strictly and often sporadically, follows a linear chronology. The repressive regimes of these towns have circumvented all but the middle class, leaving the poor with no child labor laws and a decriminalized but maligned attitude towards prostitution. In concise journalistic sequences, Watkins details these social inequities and then abruptly turns his attention to Munch and his sizable family, perched uneasily in this milieu as a group of both staunch Christians and questioning souls. Munch's sympathies are pretty much finalized when his mother and sister die prematurely of tuberculosis, with his moralizing father turning only to prayer for medical treatment. 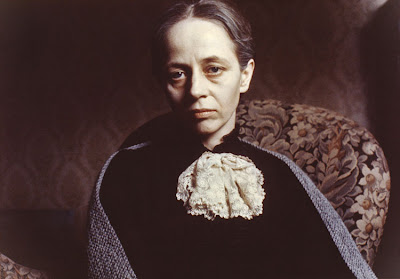 The increasingly unconventional worldviews of Munch (at least in the context of his own family) are given space to gestate at the Kristiania Bohème, a circle of rebellious artists echoed later by Munch's cooperation in a Berlin collective pioneered by August Strindberg (Alf Kare Strindberg). Lead by the outspoken Hans Jæger (Kåre Stormark), members of the Bohème dissect the moral absolutism of the Norwegian society, concepts of free love and anarchism, and the crucial role of art and expression in a functional world. For the most part, Munch is a silent onlooker at these raucous gatherings of tobacco smoke and verbal warfare, but through his artwork - the maturation of which Watkins is attentive to at every stage of the film - one can sense his growing disillusionment with strict codes of behavior and expression. A tipping point is Jæger's imprisonment following an immediately banned work of emotionally direct and politically inflammatory literature, at once a premonition of Munch's own struggles with censors and the Scandinavian intelligentsia and a catalyst for his drastic evolution from commonly accepted modes of objective naturalism in painting.

Watkins pays so much attention to forces beyond Munch's control and personal sphere that the film can hardly be limited to the straightforward biography it purports to be (and which it is wrongly held up to by art historians befuddled by the omission of the later half of Munch's career). The act of painting itself - for Munch, crude, aggressive expressions of emotional volatility and spiritual turmoil - is detailed with great precision and persistence, with Watkins' largely nervous, zooming and focus-adjusting camera taking momentary pauses to scan the textured surfaces of Munch's canvasses. The images savor the tactility of the work, recognizing (as the majority of the backward-looking Norwegian public and critical community fail to do) the pain and joy that goes into every brush stroke, every scrape. Munch's painting are mostly of his family ridden by illness and devastation, an aspect of his life Watkins is sure to stress in his repetitive inserts of traumatic moments in their household, including Munch's own near-death experience coughing up blood in his bed. These terrifying fragments of tragedy and turmoil might come across as sensationalist window-dressing had Watkins not focused on patiently establishing Munch's domestic environment early on, and ultimately their continued employment manages to express the fidgety mental sickness that sparks much of Munch's artistic inspiration. 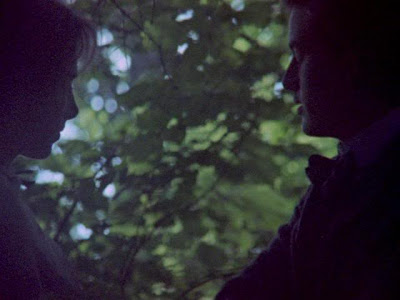 Perhaps even more instructive in understanding Munch's angst is his brief but impassioned affair with a married woman identified as Mrs. Heiberg (Gro Fraas, channeling her inner Liv Ullmann), the failure of which is the crux of the artist's social, romantic, and existential frustration. The film's most discernible narrative thrust is the rise and fall of this short-lived relationship captured by Watkins with supreme intimacy. When it does inevitably collapse, its repercussions are felt throughout the remainder of the film in Munch's paintings and in his mind, wherein fragmented moments of sexual passion, soulful staring, and subsequent jealousy replay over and over. As if to cement the fact that Mrs. Heiberg was Munch's true missed opportunity, his fullest and most transient pleasure, Watkins concludes the film on a painterly image of the two framed against a blood red sky, a simultaneously romantic and foreboding crystallization of the affair's impact on Munch. Fittingly, most of the film's loveliest, most unforgettable images - shot, like the rest of the film, in mysteriously grainy 35 mm - comprise the two of them in various natural landscapes, dreamlike evocations of bliss that seem to rest outside time.

These moments, however, are never as cathartic as the painter hopes for them to be. Edvard Munch has the tendency to cut short its brightest pleasures, splice them into otherwise bleak passages, or overlay a disparate element (sound, image) of darkness. The film thrives off the interplay of contradictory emotions and techniques (dramatic exposition, journalistic documentation, Tarkovskian meditation), unafraid to pit them against each other within a single scene. The ongoing narration itself, largely readings from Munch's third-person-ridden diary entries provided by Watkins himself, is a constant counterpoint to the action, undercutting the traditional documentary etiquette of always informing with clarity and "truth". Much of the narration seems to eschew crucial details evident in the frame, missing the entire story, or suggest an emotion not entirely accurate to what we see of Munch onscreen. It's a perfect representation of the confused and frantic psyche of this profoundly influential artist, and also one of Watkins' subtlest applications of dialectical editing maneuvers in a body of work ravaged by critical complaints about unconventionality. Fascinatingly, given the many superficial similarities in the careers of these two artists, it's probably natural that their strengths should interact in such a way.
Posted by Carson Lund at 11:30 AM