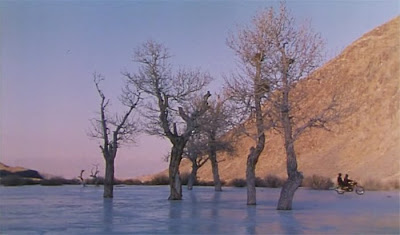 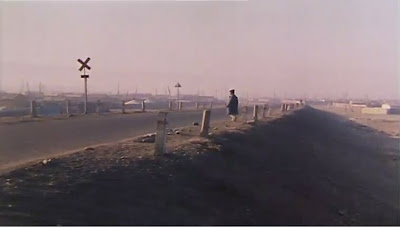 The delicacy of human memory outweighs the unknowable depths of postmortem enlightenment in Belgian filmmaker Peter Brosens and Mongolian director Dorjkhandyn Turmunkh's State of Dogs, a mesmerizing documentary/fiction hybrid that raises countless questions about existence and faith, government regulation and community, reality and folklore, history and spirituality, and most of all, life and death. A co-production spanning almost half a dozen countries, the film nonetheless feels so organic to the Mongolian experience that it couldn't have been made by an outsider. Brosens made the film as the third entry in his Mongolia Trilogy (along with Poets of Mongolia and City of the Steppes), which launched a career marked by an immersion into foreign cultures as well as an engagement with a process that is increasingly rare in film production worldwide: co-direction. Here, Brosens works with Turmunkh, a Mongolian native who must have brought a level of familiarity with the various traditions and circumstances shown in the film that rubbed off on Brosens. It's difficult to say whose credit belongs where, but whatever the case their contributions have fused into a major statement, a simultaneously tactile and mystical experience that moves gracefully with the contours of the forbidding Mongolian desert.

Is is there, in this arid wasteland of sandy hills, snowy plains, and scattered ghettos, that Brosens and Turmunkh probe the wandering spirit of a stray dog named Basaar who is killed early on by a hunter hired by the government to extinguish diseased canines roaming the city of Ulan Bator. The atrocity of the dog murders is not shied away from by the filmmakers, who create a remarkably disturbing sequence set to foreboding Arabian music that is as much of a confrontational call to action as it is an inciting incident for the story of Basaar. Electing to not advance to human life right away, the dog prefers to let his soul venture from its rotting corpse on the side of a desert road to reminisce on the few charms of his past life via an unassuming narrator (Banzar Damchaa). The scenario itself, built from the Mongolian belief that the dog is the final life form before human reincarnation, is ripe for sentimentalization on paper, but Brosens and Turmunkh approach it with a loose, surreal touch, digressing from the central premise constantly to become absorbed in the life experiences, individuals, and Mongolian rituals Basaar remembers from his days of homelessness, desperation, and danger. Among these anecdotes include the life of a recently pregnant young woman from the city who once treated Basaar with kindness (and whose child, the film suggests, will be Basaar's reincarnated form), an old nomad who owned Basaar for a short period of time along with cattle, his experiences rummaging for food amongst indifferent passersby, and his observation of various rituals within the wandering Mongolian groups (music, wrestling, the spreading of myth).

Movement - of Basaar's spirit, of trains across endless panoramas, of traditional customs passing on to modernity - becomes the crux of the film. Brosens and Turmunkh reflect it in their fluid integration of visual motifs that recur throughout, such as shots from the window of a moving vehicle and static compositions of various herds (people, cattle, dogs) moving from one side of the frame to another. Within this framework, the lack of movement becomes equally substantial; a landscape, vast and unchanging, passes through the camera's lens as if to represent a static force amidst all the movement, and thousands of dead canines are scattered across the desert and the sides of village roads, acting both as mementos for an old way of life and shocking reminders of collective guilt. Without ever becoming preachy or melodramatic, State of Dogs possesses a mournful lament towards these markers of the past, tying intimately into its concern for the sociocultural effects of globalization. Basaar's eventual rebirth, depicted in a striking sequence of intercutting, is a byproduct of drastic shifts in social and political customs. He will be born into an entirely different milieu by a woman particularly young for child labor, and it's difficult not to acknowledge the unsettling parallels Brosens and Turmunkh lightly draw between the tumultuous life of a wandering dog like Basaar and the upbringing of the modern child, especially in a context as rough and unforgiving as that of Ulan Bator. 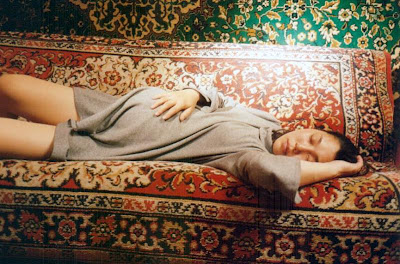 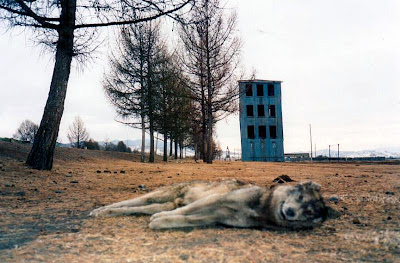 There is a vibrant mysticism running throughout the film, but it never overwhelms Brosens and Turmunkh's intimate visualization of the physical, observable world. While State of Dogs' associative arrangement may at times seem sporadic and unmotivated, the filmmakers have a deft way of evoking the coexistence of the mythic and the mundane. Seemingly non-diegetic audio bleeds into from one shot to its subsequent shot and proves to be springing from a tangible source, and myths spoken by real Mongols find faint echoes in the shot compositions and cutting patterns. Brosens and Turmunkh appear to be suspending disbelief cinematically, using the film medium as a way to entertain supernatural possibilities such as the obliteration of time and space and the presence of spirits and myths, while doing so in a way that doesn't lose grip of authentic, lived reality. Their deepest plunges into the supernatural come in the final act of the film, when townspeople rave about the narrative behind an upcoming solar eclipse: the dragon Rah will swallow the sun and leave Earth in a total freeze of darkness. After suspensefully documenting the existential panic of the citizens, the ensuing eclipse acquires great life-or-death tension. When it passes by without harm, the sense I get is not that there is no Rah, but that the hysterical drum-banging and chanting of the townsfolk scared him away.

Brosens and Turmunkh's final montage, set to a typically haunting musical score by Charo Calvo, contains a poetic power that would be embarrassed by words. Suffice to say, the inclusion of an otherworldly contortionist suggests that they have succeeded in taking a full and justified leap into the unexplainable abstractions of life, coming full circle on a complete rejection of established rules of rationality, space, and even physics (seriously, this woman bends). What at first sounded like nihilistic verbal mush out of the mouth of an impassioned poet in the opening shot of the film now resembles principles to live by. The 180 degree turnaround from skepticism to belief that the filmmakers' inspire brings to mind L'Eclisse, in which Antonioni used a similarly jarring stylistic effect to communicate the irrelevance of the supposed story (Vitti and Delon's relationship, in this case Basaar's memories) and what was ultimately the central purpose (the spiritual void of modern romantic pursuits, the necessity of faith in the modern world). Incidentally, Brosens and Turmunkh's predilection for dwarfing individuals against vast expanses of dusty desert and dilapidated modern architecture through the use of the wide shot mirrors Antonioni's similar technique. They're in good company, and they've earned it. State of Dogs is a sad and eye-opening work that, in celebrating the tenacity of one dog's memory, is able to allegorize the passing traditions and practices of an entire nation.
Posted by Carson Lund at 3:18 PM