Badlands (1973) A Film by Terrence Malick 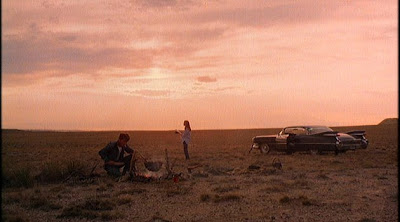 Kit Carruthers (Martin Sheen) is one of the most enigmatic Western rebels in the history of American cinema. The same can be said about his naive partner Holly (Sissy Spacek). Terrence Malick's debut is a strange, impressive film that, despite focusing all of its screen time on a young couple on a killing spree in the Midwest, is something of an anti-character study. Malick does not plumb the psychology of his characters by providing back stories, details of their experiences, or their relation to others and their society. Kit and Holly are opaque characters in the strictest sense of the word; their physical existence is all we are treated to, leaving us to make attempts at applying their physical surroundings (the extensive South Dakota and Montana frontier) as hints towards their erratic behaviors. Simultaneously though, Kit and Holly are likable, down-to-earth figures. Malick seems to have been on a mission to assert that there are pressures and justifications, possibly bigger than the world and our perception of it, that lead people to acts that are seen as evil to the majority.

Badlands sets itself up against understandable ideals; Spacek's pragmatic, drawly narration (which sounds on and off throughout the entire film) introduces Holly as a simple person bearing a vaguely troublesome road to where she's at (a 15 year old, mature-for-her-age redhead). Her father is a domineering, brutal cowboy who of course disapproves of his daughter's evolving companionship with Kit, a 25 year-old, denim-flaunting garbage boy with a poker faced cordiality, and her mother is out of the picture. Holly is understandably attracted to Kit; he commands her attention with his seeming ambivalence and she gushes (or at least I suspect she does, for nothing in her flat inflection suggests it) about his uncanny resemblance to James Dean. When Kit murders her father shortly after he denies a grant for sharing company with his daughter, Holly responds only with a hollow slap in the face and a suggestion of calling the police, to which Kit replies modestly something to the tune of, "You could, but it wouldn't be so hot for me". The two, about as unconventional a couple as any (most would say Holly is too young for Kit), subsequently flee the scene and drive headlong into the empty American West, with Kit shooting anyone who threatens their anonymity.

This, at its core, is the definition of a "road movie". Malick has no interest in such formalities though. Badlands is deliberately nondescript and visually dominant, a quite plain display of affinity with the classic mythic landscape of America. Malick uses Kit and Holly's transit as a reason to explore the rhythm of the West, a notion he was so taken by that he continued with his next film, the equally singular Days of Heaven. Malick's aesthetic here is just about the same: a devoted attention to a natural look (most often achieved with the lack of artificial light), grandiose bisections of land and sky, and warm, pleasant tones that contrast the lives of the characters on screen, which are the opposite of homely and appear to be headed towards a bleak fate. He also made it known with Badlands that he was one of the clearest descendants of Bresson, a practitioner of an economic flow and an ultimately cumulative poeticism that can be achieved by the subtraction of elements rather than the addition of them. Kit and Holly's sparse, distanced dialogue is absolutely immaculate; more often than not, it does not have to do with the film on any higher level, instead simply acting as tightly written, inconsequential fractions in an oblong whole. Undeniably, Badlands is a stellar debut, perhaps even lighter and more transfixing than any other Malick film.
Posted by Carson Lund at 6:16 AM

Hello. I've added a link to your blog on mine :)

Thanks. Love your stuff.
http://sixreelsofjoy.wordpress.com

Thanks leaf. I appreciate it.