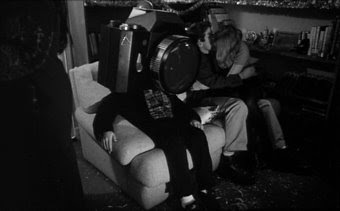 Michel Gondry is an artist who has created some of his finest work in short form or in collaboration with other directors. Like his segment for Tokyo! (2008), La Lettre comes from a collaborative program, in this case designed to center around the coming of the new millennium (2000). Gondry gave the new millennium the feel of an encroaching deadline destined to prove one boy either a man, with the approval of his been-there-done-that brother, or a teenage outcast.

The story details a typical childhood love and the difficulty to reconcile one's tacit desires with reality. Stéphane is a pouty-eyed boy on the brink of adolescence with an interest in photography that somewhat acts as a mask for his consuming affection for Aurélie, a girl he goes to school with who is leaving town for a few days. While Stéphane is enlarging a photo of Aurélie in the family's dark hallway at night (to add to his already extensive collection of photos of her), his brother advises that he "french her" before the year 2000 or else he'll regret it.

His brother's rather imposing warning sets off for Stéphane a swirl of uncertainty and self-doubt, visualized in one of Gondry's characteristically evocative dream sequences. At a cramped party high atop the city with the omnipresent clock tower placed nervously outside the window - the scene looking purposely, as usual, like it was constructed directly in a set - Stéphane trudges around the room with a physically impeding camera on his head, eyeballing the barrage of couples nuzzling each other as they dance. Eventually he makes a move on Aurélie only to clunk her in the face with his lens-face, causing the entire room to quake and the clock tower to inevitably come crashing down on them. The symbols are all quite pronounced: the clock tower acting as the outside forces threatening Stéphane, the camera as the hobby that he veils himself behind.

Gondry's tale is a simple one, but it's unlikely that another director could manage to realize it so imaginatively. Stéphane snaps out of his dream and heads to Aurélie's house at her request, for she has a letter for him. Obviously, as any child in his situation would, he believes that it will be her pronouncement of her love for him. Life however, unfortunate as it is, does not come so satisfyingly. Upon reading the letter he is startled, bombarded by the complexity of life, and, through a series of tactful old-fashioned camera techniques, retreats back into the subjective "reality" of his photographs. This procession would stand as another time Gondry has explored the different realms of reality one utilizes to escape the truth, often in a romantic situation.

La Lettre is brilliant short film with the intimate look of Truffaut's 50's work and a straightforward score that matches Stéphane's minor predicament. It is also one of Gondry's most personal films because he has admitted to his childhood unfolding congruently with Stéphane's; he too was a child enthused by the art of photography and withheld the unattainable romantic desires that are inherent in the era.
Posted by Carson Lund at 6:17 AM