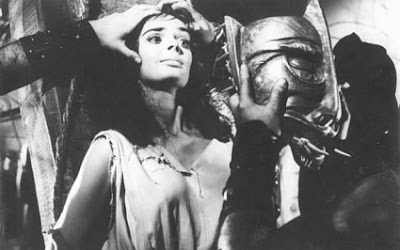 The iconic symbols of Italian Gothic horror films have somewhat made their way, not always knowingly, into the film world's collective consciousness, and perhaps the most stylish purveyor of these types of images is Mario Bava. Despite never before seeing his debut Black Sunday (or The Mask of Satan), I found myself recognizing his certain phantasmagorical ways of seeing things, of giving them a durable horror that is tried-and-true. Imagine the best haunted front lawn you've seen on Halloween, magnify that bravura tenfold, and extend it to feature length and you'll get Bava's seminal work of Italian horror. It's the kind of familiar storyworld where characters are always decoding inscriptions, making haste, rushing to complete tasks "before the sun goes down", and being enveloped in sinister curses.

The film has lost some of its terror as years have past, with camp taking its place, but what remains can be attributed more to the indelible face of Barbara Steele in the the unsettling double role, to the otherworldliness that her mere corporeity sheds off, than the actual plot of the film. Steele, who would later appear in a different light in Fellini's 8 1/2, plays both Katia Vajda, the alluring daughter of a 19th century patriarch, and Princess Asa Vajda, a seductress who has long been dead and entombed for her wrongdoings in the 17th century. Befitting the title, Asa was walloped with a spiked mask said to carry the spirit of Satan and subsequently charged with death by fire to rid of the evil spirits entirely. However, when rain from above - as if sent be some supernal force - washed out the fire, Asa was simply buried in a decrepit vault. Of course, material things such as vaults can not contain the elusive power of evil, so when Asa is awoken by a doctor and his colleague who were sent to Katia's village with healing duties, she wreaks all kinds of sadistic havoc on the townspeople, also spawning the revival of the brute warrior she was killed with. The vampiric look of Steele, with her extensive forehead, defined cheekbones, and pointed eyes, is pivotal to the success of her performance.

What's most fascinating about the film however is Bava's careful control of the mise-en-scene, the blatantly manufactured milieu of doom that he creates. Restless fog rolls over the swampy forests that outline the village and, even in night scenes, there is a mystical light that diffuses through the lively tree limbs that hang like tentacles over the environment. Although it is always obvious that studio lighting or fog machines are situated somewhere not too far from the confines of the frame, Bava's intricate settings never come across cheaply. Known for an equally prolific career in cinematography, Bava takes the director of photography role as well. In keeping with a classic horror staple, Black Sunday thrives on its chiaroscuro look, its deft shadow and compositional play. The production is as sparkling accomplished as Hollywood studio dramas (complicated dolly shots that compliment action, slow zooms to elevate fear), only there is an added grit when the high contrast images are coupled with their ominous, cobweb-laden settings. The film is a prime look at how Mario Bava's technical mastery was omnipresent, even at such an early stage in his career.
Posted by Carson Lund at 6:10 PM