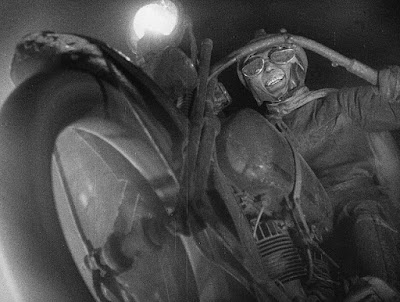 "Horizon lines and vanishing points can sometimes be about as rare to come by in Fritz Lang's cinema as tracking shots are in Yasujirō Ozu's. In 1928's Spies, because of the geometric enclosures of the sets and the frequently downward-facing scan of Lang's camera, the background of the 4:3 frame is nearly always a wall, the ground, or a cluster of set elements that foreclose the margins of the characters' space. As in the opening shot, which shows a padlock up close before two ominous gloved hands enter the frame to pry at the lock. Lang first conceives of a restricting visual field and then confines human figures within it—all the better to hint at the invisible forces that govern individual lives." Continued at Slant.
Posted by Carson Lund at 1:47 PM