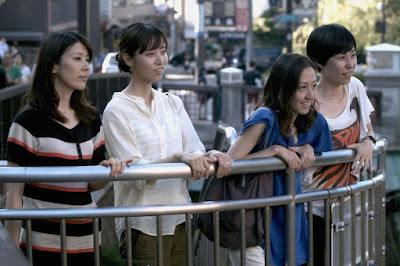 "Hamaguchi arranges most sequences around a handful of static, roomy medium shots that subtly suggest emotional dynamics through camera and actor positioning; several scenes around a dining table demonstrate how much the director is able to express, how much latent energy he brings to the surface, merely through who's in and out of the frame. In an excruciating trial scene brimming with the defense's implicit sexism, Hamaguchi develops his shot choices around the axis of Jun's head, keeping her central as the dehumanizing processes of the court play out in the distant background. The use of pillow shots and choices of placid interstitial music reveal Hamaguchi's kinship to Yasujirō Ozu and Hirokazu Kore-eda, but the film's formal DNA bears more traces of Eric Rohmer, who was similarly expert at orchestrating extensive dialogues with a minimum of overt directorial statement." An excerpt from my review of the wonderful Happy Hour, showing at this year's New Directors/New Films festival in New York.
Posted by Carson Lund at 11:29 AM