Nebraska: The above image gets at the heart of Alexander Payne's latest. From the perspective of a television set beaming a Detroit vs. Chicago NFL game (is there a more classic, long-standing matchup?), we see pale, wrinkled, defeated men, eyes frozen by the familiar spectacle before them even as their investment seems less a product of genuine excitement than numbing routine. A common critique lobbed at Nebraska, and at Payne in general, is that the director creates grotesque caricatures only to belittle them. I feel Payne recognizes these Midwestern bumpkins waiting to die in their sunken sofas as tragic manifestations of accumulated repression and resignation to life's shortcomings and disappointments, and the resulting sense of dark humor comes, at least in this case, not from smug superiority but from a heavyhearted acknowledgment of the ways in which life wears on everyone. Seeking to replace lost pleasures, the film's characters resort to materialistic desires, illusory as they are; a father's (Bruce Dern) misguided pilgrimage to claim his transparently phony million dollar reward becomes the central narrative and thematic thrust, but the falseness of the promise only exacerbates the breakdown of trust and support within his estranged family. "I just want one," grumbles a perpetually hungover and out-of-it Dern of his desire for a new pickup truck, crystallizing the prevailing attitude of the ensemble: when life no longer seems to offer joy, wealth and belongings are assumed to be the corrective. Nebraska's resonant monochrome widescreen images are in the vein of the predominantly gray, sparsely populated Midwestern landscape photography of Stranger than Paradise (1984), another film which regards the stubborn commitment to a fading lifestyle with a tarnished romanticism. But Payne's film offers another level specific to today's America; in the deceptively schmaltzy denouement, we're not quite watching a man's triumphant re-discovery of himself, but rather the full emergence of a new, more dispiriting form of father-son bonding predicated on the temporary relegation of real problems to shiny distractions. 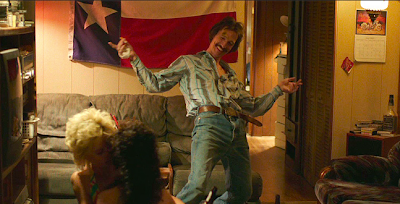 Dallas Buyers Club: On this one, I'm mostly in agreement with R. Kurt Osenlund, whose politically charged piece intones with a sense of fed-up finality: Why must we continue to not only accept but elevate this sort of myopic message-mongering? As a heterosexual, I can't speak with the same authority, but I nonetheless found the film's portrayal of LGBTQ culture to be staggeringly one-note and its bid for queer awareness to be almost pathetically flawed. Matthew McConaughey's portrayal of Ron Woodroof as a vitriolic homophobic redneck-turned-gay-hugging-survivalist has a definite exhibitionist force (the actor lost considerable weight for the role, and sinks into his despicable identity with great conviction), but it's squelched by what he represents: a hateful prick being implausibly sheohorned into the dominant Hollywood narrative of redemption. What results is a classic case of eggs-in-the-wrong-basket storytelling. Director Jean-Marc Vallée strains to render Woodroof a tragic hero at the expense of showing any logical demonstration of how he traverses the vast ideological ground that takes him from regarding "faggots" as the bane of the Earth to getting into fistfights over them in grocery stores. In the meantime, the struggles of an entire people – represented here as only the most radically marginalized personalities, the folks most likely to stir homophobic fire – becomes a mere footnote, the vehicle for Woodroof's character arc but rarely a palpable large-scale tragedy. A late-stage shift into hetero melodrama (Jennifer Garner's flimsy doctor never confronting Woodroof's greatest human failings even as she initially expresses disgust towards him) starts to feel in this context like an insult. 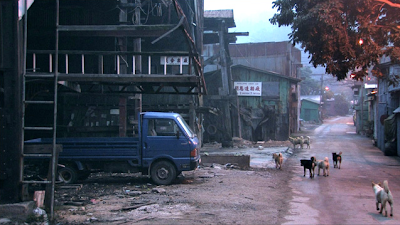 The Last Time I Saw Macao: Unclassifiable and unpredictable, João Pedro Rodrigues and João Rui Guerra da Mata's utterly unique documentary-fiction hybrid (I realize that in today's festival landscape such a characterization might sound contradictory) begins as a fairly straightforward visual travelogue of Macao (a "Special Administrative Region of the People's Republic of China" that was once a longtime Portuguese colony), then lays over the top of it an entirely invisible narrative with campy shadings of noir and sci-fi before ultimately surrendering the film to some uncanny conspiratorial force that enshrouds the movie's final passage in a cryptic, wordless, vaguely apocalyptic fog. Prior to watching this, I had only seen Rodrigues' short Morning of Saint Anthony's Day, which shares with Macao a cash-strapped inventiveness; the director and his screenwriting partner conjure up their enigmatic atmosphere via mostly static documentary images of contemporary Macao and the latter's paranoid narration alone. While Mata guides the viewer in his quest through his old hometown for a stripper in trouble named "Candy," the camera seems to adopt his perspective (one that's prone to Pedro Costa-like urban tableaux) but is equally likely to "construct" suggestive details through nifty compositional tactics. For instance, Candy's supposed murder at the hands of gangsters occurs at a shadowy dock where construction equipment and nautical structures obscure the line of sight, leaving us to speculate upon the source of bone-chilling screeches that could either be the menace that Mata speaks of or mere industrial clamor. The film is tantalizingly drawn to the disconnect between what we see and what we hear, a dissociative spell it seems to link to the post-colonialist mindset (Mata, after all, plays a Portuguese filmmaker returning as if by some magnetic pull to his old colony). Moreover, street animals – specifically cats – are omnipresent throughout as bizarre escorts, suggesting Rodrigues and Mata are consciously working in the lineage of Chris Marker.