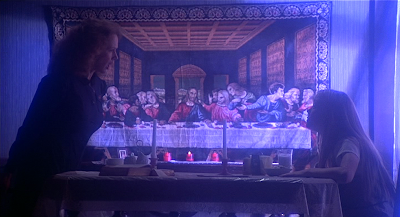 Backyard (1984): One of Ross McElwee's earliest attempts at autobiographical documentary, Backyard is a surprisingly accomplished piece of work, already featuring a subtle display of familial eccentricity dovetailing with larger socio-political issues. After years of living and planting the seeds for his impressive career in Boston, McElwee's return to his North Carolina home is completely free of any overarching sentimentality; the film's prologue, which introduces McElwee's sarcastic narration and establishes the bitter father-son relationship that is one of the movie's backbones, quickly snuffs out the possibility of any nostalgic warmth. On the surface, the film documents the family's gathering for a wedding in the neighborhood country club, but McElwee's more interested in the stuff that occurs around the main event, the in-between moments that highlight the casual racial, gender, and power dynamics of the community. A black beekeeper that works for McElwee's father as a groundskeeper is one of the key subjects, a quirky elderly man whose discomfort at the superficially compassionate belittlement directed his way by the family is barely concealed. The title comes from a song sung by McElwee's grandmother in a rocking chair in which she croons about idling around in her own backyard. Initially a charming offhand moment about the importance of family values, her words start to retrospectively solidify as a metaphor for stubborn conservatism in the south.

Of Time and the City (2008): Upon a second viewing, my admiration for this film remains at a slight remove. Whether it's the candid reflections on specifically Liverpoolian rites of passage, the sometimes too-florid (for my taste, at least) baritone narration of Davies himself, or the identity of the filmmaker as a homosexual working-class outcast (something only so much empathetic guesswork can account for), I've always felt a certain opaqueness here. I love Davies' use of music (particularly that inaugural arpeggiating piano line that inspires instant melancholic swooning) as much as his perfectly timed silences, and the selection of footage is often unbearably poignant (archival monochrome snapshots of mundane street scenes do the film far more favors than the artifact-y digital video), but his fiction films have always felt, for lack of a better term, more universally accessible and less regionally airtight. This may sound odd coming from someone who prefers the outlandish hometown specificity of Guy Maddin's own memoir My Winnipeg, but maybe I just feel Maddin's fever dream retro-fetishism is a more direct route to accessing the complicated relationship with one's hometown than Davies' rambling and reference-heavy poeticism.

Carrie (1976): Brian De Palma carves out no more than two equally undesirable paths for the titular everything-phobic high school outcast in what is perhaps his quintessential revenge yarn: that of terminally self-denying, hermetically sealed Fundamentalist Christianity or that of the image-obsessed status quo. These two routes receive quite distinct tonal treatment: the former is played as histrionic B-movie horror with Dario Argento's exaggerated lighting effects and the melodramatic tenor of a radio drama while the latter feels like some obsolete drive-in teen flick with Roger Corman-esque plot quirks (namely, a pig-slaughtering prom night ruse). Imagine the film as an early television set with a shoddy antenna that can't keep one station intact for more than 10 minutes. Jarring transitions abound, but the unique effect of the film's relentless gear-switching is that it's always rhythmically in sync with the topsy-turvy mental space of Sissy Spacek's profoundly dejected loner. De Palma's ballsy formal irony – mystically fogged slow dollies of the female locker room, an accelerating spinning shot of slow dancing to deceivingly suggest romantic bliss – is used to hypnotic effect, seducing the eyes even as it lays bare the ugly cosmic imbalance that ushers Carrie towards eternal insecurity. Still one of the most relentless portrayals of all-encompassing adolescent anxiety in cinema (I know next to nothing about the remake).

Duck Soup (1933): The idea behind this priceless Leo McCarey/Marx Brothers collaboration – that all government bureaucracies are filled with daft and irresponsible buffoons – is ridiculously simple, but that's not what matters. What matters is the snappy cadence of Groucho's histrionic smart-ass accent as he delivers a torrent of baiting one-liners, the swiftness of Harpo's hands as he conducts his wordless horsing around, the disapproving glares of Gummo as his sidekick nearly flubs every plan, and the way in which McCarey's mise-en-scène – patient, unshowy, but extremely rhythmic – draws attention to the brothers' tomfoolery. Understandably, we tend to remember a comedy like this based on its performers, but the bottom line is that, in order to be elevated beyond mere theatrical spectacle, comedy of such impeccable timing relies on direction that is sensitive to the movements of bodies, the comic dimensions of space, and the humor imbedded within certain cutting patterns. A joke can fall flat if seen from the wrong angle, or if seen without a cut at the right moment. There's no better evidence of this fact than the film's riotous climactic sequence, a vision of indolent warfare in which the gradual implosion of the set becomes an integral part of the joke. 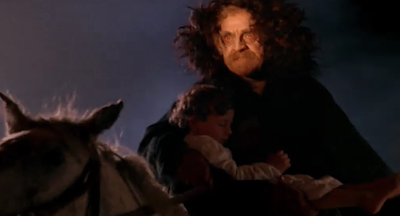 The Mother and The Whore (1973): Maybe it says a lot about my demeanor, but please excuse the fact that I was genuinely amused by the narcissistic ramblings of Jean-Pierre Léaud's ungrateful protagonist in Jean Eustache's quintessential post-May-'68 film, which is to say the issue of despising the character too much to care never really factored into my experience. The Mother and The Whore doesn't feel exhausting in the extremity of its focus on character because it's so light on its feet; much of the regressive, highfalutin' hogwash spilling out of Léaud's mouth is very funny, and Eustache's direction (though initially seeming pedestrian in its barrage of shot-reverse-shot setups) is tinged with enough dry detachment to encourage some critical distance even for those more prone to identifying something of themselves in these casually self-destructive individuals (a lot of this has to do with the timing of the cuts to the perpetually blank victims of Léaud's incessant talk). But the film's greatest accomplishment is its gradual transformation into something much darker and sadder than its seemingly aimless first two hours suggest. Eustache spends so much time and burns so many close-ups surveying the day-to-day delusions of these unfaithful and compulsively hypocritical pleasure-seekers that there's bound to be an eventual implosion, and when it does come it nearly matches Bergman for toxic soul-baring. By its messy conclusion (love Rosenbaum's matter-of-fact summary: "he leaves, then runs back and proposes; she accepts, vomits into a basin, and Alexandre collapses on the floor against her refrigerator"), the film has shuttled through a turbulent range of emotions, representing perhaps the definitively cynical take on polygamous French romantic notions.

The Evil Dead (1981): My first time seeing this (fear of Raimi fanboys always kept me away), and I'm pleased with the experience. Less reliant upon camp than I was expecting, the film's basically a sly exercise in style and the tweaking of narrative expectations. Once the allure of plot surprises is extinguished – one of those hideous ghouls (like permanent manifestations of Linda Blair at her ugliest in The Exorcist) goes ahead and spills the beans in the opening act regarding what will ultimately go down – Raimi's left to spin formal tricks. The question of "who will die next?" quickly becomes secondary to "when, and more importantly, how will they be dispensed with?" Sometimes a deceiving stretch of lugubrious build-up leads to a jolting shock cut; other times the ostensible downtime between deaths is poisoned by the grisliest, most emphatically bloody murder of all. Too goofy to really be deemed nihilist, the film has no pretensions, self-consciously treating death as little more than it often is in the slasher genre: an excuse to play around with narrative and visual strategies.

Black Sabbath (1963): Structured like a spooky radio hour with three separate tales introduced by a stage-settingly macabre Boris Karloff (and thus a feature-length precedent to Are You Afraid of the Dark?), the supposed personal favorite of director Mario Bava among his many films is an inconsistent but otherwise efficient Halloween spectacular. Together, the three shorts – in chronological order, A Drop of Water, The Telephone, and The Wurdulak – are deeply fixated on the past, haunted as they are by a specific motif: ghosts are metaphorical vehicles for unresolved, ignored, and ultimately destructive tensions among people who are (or were) close to one another. With the exception of the second tale, a vaguely misogynistic Hitchcockian riff about an angry ghost exacting vengeance on his two-timing closeted lesbian wife, Bava works in a baroque folktale mode here, whipping up vertiginous zooms, pre-Suspiria color treatment, and janky handmade special effects to communicate simple, symmetrical parables. Gargantuan, ornately designed sets consume so many square feet of Bava's studio that lights appear to be just barely tucked out of frame, a limitation that only makes the film's acrobatic camera wizardry all the more impressive. That the seams, ever so precariously implied, never quite show is a testament to the considered craft on display to saddle these potentially tawdry quickies with their necessary levels of punctuation. However much it dates itself, Black Sabbath remains a film of dazzling directorial confidence.