Blue is the Warmest Color (2013) A Film by Adellatif Kechiche 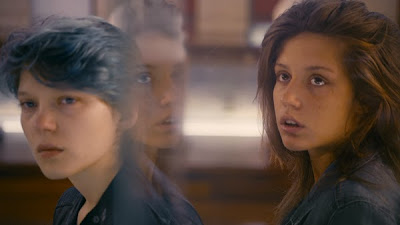 After about 45 minutes of Abdellatif Kechiche's Blue is the Warmest Color, I found myself wondering if there's some sort of quota, unbeknownst to us, regarding the number of challenging and distinctive films that can win the Palme D'Or at Cannes in a given decade, and if the festival might have reached it, and whether or not the jury's selection of Lauren Cantet's palatable but unremarkable handheld jabberfest The Class in 2008 might have been made as part of an effort to clear the runways for something like Uncle Boonmee Who Can Recall His Past Lives two years later, and whether or not Kechiche's coming-of-age romance might be another mark in that tradition (and what that might foretell for the next two years). All of which is to say I was reasonably skeptical of a lot of things that were going on in the French-Tunisian director's latest: competent but commonplace "naturalistic" handheld camerawork sprawled out seemingly irrationally to a 2:35:1 aspect ratio, a narrative setup about teenage self-actualization, a "tricky" and underrepresented subject (lesbianism), and ongoing rib-nudging intellectual discourses – on fate vs. predestination and Sartre's existential philosophies – that underline the film's themes. Oh, and there's also a close-up of the film's female lovers backlit by the sun as if to suggest their lip-smacking birthing holy light, the kind of shorthand visual kitsch I parodied with a friend on a short video skit several years ago (excuse the self-promotion).

To hell with first impressions, I guess. Two and a half hours later, I didn't want the film to end. Blue is the Warmest Color is a movie of constant, sometimes rocky evolution, a form it shares with that of a turbulent romantic relationship. It channels inward on a plot level but expands consistently outward in terms of resonance, starting out as a film tuned in to the coming out process and its interpersonal repercussions and concluding as a remarkably sensitive, all-inclusive portrait of the challenges and rewards of having a significant other. As the film progresses, an increasing amount of peripheral narrative context is shifted aside to yield heightened attention to Adèle (Adèle Exarchopoulos) and Emma (Léa Seydoux), a decision that matches the flood of disregard for the outside world that tends to occur in the throes of infatuation. Suddenly, months and years start skipping by, and the initial charge of passion felt by the young lovers starts to wane, in its place arriving a different and more labor-intensive form of emotional commitment.

It's true that there's something of a porn-like plot setup at work in the first hour (sexually confused high school tomboy gets seduced towards fantastic girl-on-girl sex by the exotic blue-haired ambassador of lesbianism!), the obligations of which the film satisfies with its dramatic foreplay and careful build to the first sexual act. It's also true that what follows is a well-trodden story of a first love's valleys and peaks. But what makes the three-hour Blue is the Warmest Color work so beautifully is its elongated dramatic rhythms, performed with such commitment and actorly invisibility by Exarchopoulos and Seydoux. Where Kechiche's script and direction is marred by infrequent spurts of overstatement (a flippant analogy between seafood and female erotica certainly is not needed, nor is a scene in which Adèle's high school peers berate her on suspicions of pussy-licking), these actresses radiate behavioral nuances that transcend the ideas on paper.

For instance, a pair of back-to-back scenes of family dinner at Emma and Adèle's homes are simplistically designed to illustrate the contrast between Emma's liberated aunt and uncle and Adèle's conservative, careerist parents. Through a mix of actor rapport and a camera alert to telling gestures and glances, however, what they end up doing is hint at the extent to which the values of each family are not static; dinner conversations function as casual opportunities for belief systems to be willingly tested. Another example would be the way in which Kechiche's so-overt-it's-in-the-damn-title chromatic symbolism – implying muted, sublimated passion – works overtime to codify the expressive scope of Seydoux's character; meanwhile, Emma's eyes and body language get at something more: as comfortable in her own skin and confident on the sociocultural margins as she is, she also seems troubled by emotional insecurity, by an anxiety of giving too much of herself to someone else.

Until later in the film, Adèle, on the other hand, never quite knows what she's doing. Inexplicably drawn to Emma when she meets eyes with her on the street (the reverberating steel drum music playing nearby in this scene has a Rivettian sort of mysticism about it in the way the urban space serendipitously reflects psychological realms), Adèle's doe-eyed lustfulness becomes marked by an existence before essence complex, Sartre's idea that we experience the world pre-cognitively before defining our understanding of and place in it. Emma's hand-holding explanation of this philosophy in the couple's first hangout outside of the neon-soaked gay bar in which they meet drives the point home a little too heavily, but the wandering movements of Exarchopoulos' eyes, her seemingly constant sense of being on the brink of compulsive dancing, and the way her mouth, usually agape, suggests an uncontrollable impulse to either say something or devour her object of interest organically embodies this impression. By the time the couple first have sex (vehement, ravenous sex), it feels as though Adèle is being compelled by some out-of-body experience, her brain somehow two steps behind the clairvoyant physicality of her body.

This particular sense of subjective transcendence drives the beginning-to-end sex acts that overload a good thirty minutes of the film's middle (a hefty chunk of time, yes, but proportionally scant in the grand scope of things). Kechiche is clearly interested less in sex as something to ogle at (though, being an allegedly hetero male director, it's impossible to completely relinquish that suspicion) and more in its metaphysical properties as an abstract crystallization of romantic love. The marathon-like quality of the film's sex scenes pushes them beyond mere dramatic functionality and into something more balletic. Kinetic bodily contortions are captured by a tight, roving camera and soft natural lighting, both of which render the distinction between limbs void—in effect, Adèle and Emma "become one." It helps to be able to buy into Kechiche's earnestly spiritual conception of love, but even if you remain skeptical (I do), these scenes are harmonious combinations of form and content. In their totality, they make Blue is the Warmest Color one of the fleshiest of all romantic films; it never once forgets that bodily interaction is as vital a component of romance as verbal bonding. 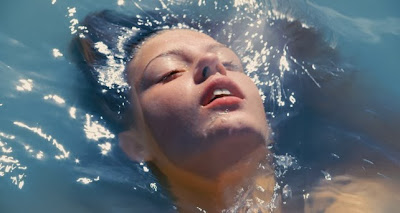 Images of Adèle and Emma making love secretively in the bedrooms of their respective homes suddenly make way for scenes of them cohabiting the same living space, and little is made of the shift. In the meantime, Adèle transitions from student to elementary school teacher and Emma, having symbolically lost the blue dye in her hair, reconnects with her art-world posse, registering for Adèle as a sign of their drifting apart despite Emma's notable efforts to integrate her uncultured girlfriend into the fold. Ennui sets in, not drastically or overtly, but rather cumulatively, in the spaces between scenes and in wordlessly expressive close-ups. In a film of so few wide establishing shots (I can count on two hands the total), Kechiche allows no space for detached observation, for moment-by-moment analysis of what's happening on a deeper level. Adèle's eventual heterosexual infidelity, then, doesn't register as a stale and predictable plot beat so much as another instance of underlying emotional chemistry propelling her somnambulistically to action. The same is the case with the couple's ensuing breakup fight, an explosive, tear-filled affair that plays as shockingly as it must feel for the characters.

Blue is the Warmest Color's portrait of a romantic relationship, therefore, is governed by an uneasy but valuable idea: we are not in control of our relationships so much as they control us. The very knowledge of being in a relationship brings with it a certain kind of baggage that is bigger than either individual. It makes us question ourselves and question our partners. The unmistakable intensity of Adèle and Emma's affection for one another in the film's final scenes of attempted reconciliation is equaled only by their awareness that there's something inherently combustible in the sum of their parts. This is the truth that makes a scene like the one when the lovers briefly, teasingly rekindle the sensual abandon of their initial lust for one another in the public space of a restaurant so devastating. Fervent kissing and naughty feeling up leads inevitably to self-doubt and regret. That's an admirable reality to arrive at in a film that initially proposes love as a phenomenon of feel-good, transformative infinity.