Vertigo (1958) A Film by Alfred Hitchcock 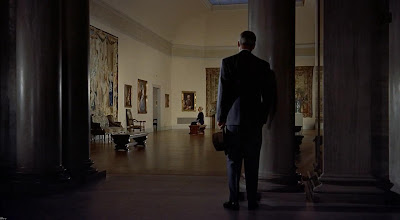 I wonder if those responsible for the restoration of Alfred Hitchcock's Vertigo realized, consciously or not, the meta nature of the project, seeing as the idea of restoring an old film mirrors so many of the ideas Hitchcock was getting at with his signature classic: trying to reclaim something from the past, to make it over into its ideal form, to resurrect a lost artifact in a new light. That Vertigo does exist now in varying forms seems the logical extension of its own motifs of doubling, projection, and representation, staging its Cinemascope print (the latest and ultimate iteration) as not necessarily the film finally actualized but as the film in one form - its most idealized - of many. This Vertigo is the Kim Novak of James Stewart's most sacred dreams, Madeleine at her most stunning and ethereal. Which, perhaps, gives it the kind of blunt experiential force necessary to match Scottie's (Stewart) obsessive desire, the eye-popping colors and unreal sense of space to bolster the audience's sympathetic alignment with Hitchcock's memorable protagonist.
After enough probing, the twisty, complex Vertigo reveals itself to be a fairly universal love story. Taking the kind of structurally convoluted, paradigm-shifting approach that can't help but dredge up a minefield of uncomfortable human behavior (the same path David Lynch would take to tell a fundamental love story with his own riff on Vertigo, Mulholland Drive), the film burrows into the complementary psyches of John "Scottie" Ferguson and Judy Barton (Novak). Though commonly understood chiefly as a vehicle for the psychological deconstruction of Scottie, Vertigo is in fact one of the most comprehensive studies of two people in the history of cinema. Both main characters - specifically, Scottie of the first half and Judy of the second - are without a fixed identity, prepared to be malleable entities to achieve what they desire yet simultaneously hiding some aspect of their inner life. Scottie routinely calls himself a "wanderer," and by the end of the film Judy proves to be one too; it's the slogan of a person desperately searching for love, aiming to frame themselves as perpetually "available". 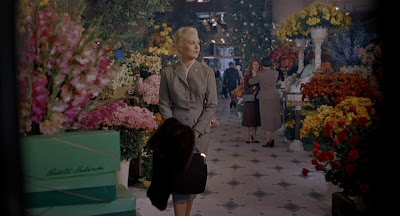 Wandering, as a physical, metaphysical, and psychological notion, actually provides a succinct framework for understanding both the events of Vertigo and Hitchcock's underlying commentary. It is part of the reason why Scottie, fresh off retirement from detective work after succumbing to vertigo and letting a colleague fall to his death from the roof of a building in the opening scene, is hired by fair-weather friend Gavin Elster (Tom Helmore) to follow his wife Madeleine Elster (Novak again). He insists she has been periodically possessed by the ghost of Carlotta Valdes, a woman in a painting at San Francisco's famous art museum, Palace of the Legions of Honor. It is why Scottie subsequently becomes so magnetically attached to the pursuit of Madeleine, seeing as she herself, under the spell of Carlotta, resorts to wandering. For Americans, wandering relates to a lack of discipline and productiveness, and it's precisely this middle-class pragmatism and sense of duty that Scottie wants to avoid. He's more interested in a decadent European frame of mind wherein wandering without guilt and without fear of class slippage is honorable, and he glimpses that same mindset in the suave, sleek Madeleine, who seems to travel only to decidedly un-American locales (the art museum, an old, opulent hotel, the San Juan Baptista mission) around San Francisco.

Scottie's avoidance of duty and conformity - he's single, jobless, and, with the exception of the motherly Midge (Barbara Bel Geddes), practically friendless - is essentially a rejection of reality. As a result, Vertigo integrates the dichotomy of reality vs. illusion that is so central to art in its structural, aesthetic, and narrative elements. Novak's famous entrance into the film singlehandedly erects this idea. The first elaborate camera movement that spots her amidst the velvety beauty of Ernie's Restaurant feels like the out-of-body perspective of Scottie, who's seated in awe across the room at the bar. Then, there's something almost taunting and self-aware about her subsequent trip out of the restaurant directly past Scottie, pausing to be viewed in enigmatic profile. For a suspended moment, the light seems to dim in the room while brightening around the glowing Novak, as if Hitchcock is making an announcement of theatrical artifice: after this point, all will be an illusion. Once Madeleine has entered the film, Hitchcock creates strong visual distinctions between Scottie's world in her presence and his world without her. The camera glides with forward-moving elegance towards her, the images shrouded in a fog filter that transforms unglamorous San Francisco reality into a heavenly dream; back in the company of Midge, on the other hand, the film defaults to sharper images and stiffer, more conventional blocking and cutting, while Midge's apartment is haunted by a painfully and irrevocably real panorama of the city. 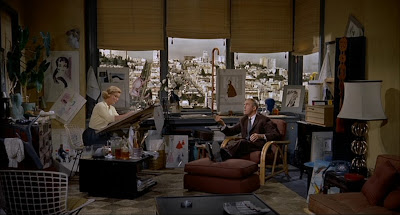 The events of the film's first two thirds, leading up to the "death" of Madeleine at the San Juan Baptista, are riddled with endless curiosities and coded with little hints that suggest there's nothing normal about Scottie's investigation. This is not just a man following an unsuspecting woman and gaining information about her - there's something tricky, perhaps conspiratorial, going on. All these hints gain retrospective power once Madeleine is revealed to be alive in the form of Judy in the final third of the film. Hitchcock compounds this sense of suspicion in several ways. First, there is Madeleine's repeated encroachment towards the camera/Scottie's perspective, getting at such an uncomfortably close distance that it seems impossible for her not to be aware of his presence. Then, there is Novak's unsettling sense of performativity for Scottie, particularly in her attempted suicide at San Francisco Bay, where she poses for quite some time with postcard perfection in front of the Golden Gate Bridge as if to tempt Scottie with her idyllic beauty. Finally, lines of dialogue slip out as the film inches closer to its ostensibly tragic moment that, in their vagueness and incompleteness, suggest another soul emerging from within the previously stoic Madeleine: "And if you lose me, then you'll know I, I loved you. And I wanted to go on loving you." One gets the feeling, a euphoric feeling, that Judy is coming out of the shell of Madeleine.

This sudden fusion of identities, this bleeding of the realms of fantasy and reality, is the most moving aspect of Vertigo. Lynch has become known for this same maneuver, a whiplash effect caused by the film seeming - at first glance - to be falling apart around itself, but here Hitchcock mastered it. In this moment before "suicide," before following through on Elster's scheme, she is torn between obligation and desire, which is manifested as a split between two distinct personalities. These two personalities are irresolvable, an idea given weight by Hitchcock's application of completely different character traits to Madeleine (radiant, softly speaking, cool, stunningly dressed) and Judy (brash, forward, pragmatic, gaudy). Indeed, they seem like two different people altogether. All of this underscores the similar irresolvability of reality and illusion. The clichéd visions of romantic love between Scottie and Madeleine - based on nothing more than simplistic platitudes of courtship, not real connection - have no place in reality. Scottie's spiral into obsession has a notable casualty: the friendship of Midge, who is last seen in the film fading into darkness in the vast expanse of a mental house hallway. 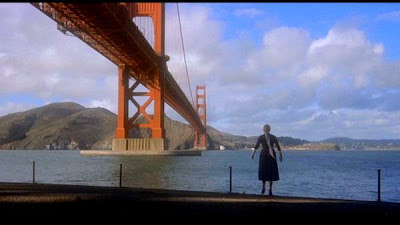 Enter in Scottie's vertigo to this framework and the film gains an extra dimension of meaning and significance. Consider Hitchcock's famous "vertigo shot," an invention that involves both backward camera movement and forward zooming; there's something elegant about that combination of forward and backward movement in the context of the film's themes. Judy's character arc, in particular, is defined by its back-and-forth movements, from Madeleine to Carlotta Valdes and back, as well as from Madeleine to Judy and back. Her psyche is constantly pulling itself apart by competing impulses, those of her heart and those of her job. Scottie, too, is conflicted. His eager sprawl towards his idealized romantic object is interrupted by jabs of reality, from Midge's vulgar painting of herself as Carlotta Valdes (intended as a lighthearted joke but taken by Scottie as an aggressive attempt to break the spell) to the concrete danger facing the suicide-prone Madeleine. Also, the film visualizes this conflict in its interplay of forward and backward tracking shots that tend to signal the entrance or exit from an illusionistic realm.

When a nun suddenly enters the bell-tower of San Juan Baptista as a creeping shadow and sends Judy leaping out the window in the final moments of the film, to me she registers as Death arriving to put the inevitable end to Scottie's cycle of obsession and self-deception, not necessarily as a tangible catalyst to Judy's hysteria. In this way, Vertigo is brutally fatalistic about the punishing end result of obsessive objectification. It reveals Scottie's harrowing make-over of Judy back into Madeleine - a striving for a perfect vision of the past that was itself a facsimile - to be inherently flawed and destined for self-destruction. Like so many great works of art, the film is about the danger of substituting art for reality, the actual chaos and imprisonment (rather than bliss and perpetual satisfaction) that can result from too fervently seeking an ideal, an idea that the ever-meticulous Hitchcock implicates himself in. His Vertigo is a towering achievement, a harmony of form and content so complex that it cannot be unraveled in a mere viewing or two.

Nice analysis, and towering achievement indeed; it's easily my favorite Hitchcock film (Rope, Rear Window, Notorious, and Psycho rank closely underneath). Interesting how reception was so mediocre when it first came out. It took a long time to be recognized for what it is.

And it's interesting how you put up this review now, since I just watched Rope (for my, what, 14th, 15th time?) a couple weeks ago. Feel free to review that one any time! I love everything about it -- the long takes, the dialogue, the characters, the premise.

It's my favorite Hitchcock too, followed closely by The Birds and Psycho, and I really like The 39 Steps too. I haven't actually seen as much Hitchcock as I'd like to, and have not seen Rope outside of isolated scenes.

Whenever asked what I think the greatest film of all time is, I'm hard pressed to choose between Citizen Kane, The Godfather, and Vertigo.

You've inspired me, I'm going to blog my ten favorite Hitchcock films after revisiting a few. There are many such pick lists all over the web, of course, but as always, I find the rankings to be either too predicatable or, when they show thinking for themselves just plain off-base. So I'm going to set the record straight. :)

Have you happened to read Charles Barr's BFI film monograph on Vertigo? Highly recommend it if you haven't. Barr extensively discusses the back-and-forth impulses of Judy's character, and he also makes the argument that the entire movie may be Scottie's pre-death fever dream as he is hanging from the rooftop in the opening (a la An Occurrence at Owl Creek Bridge).

Vertigo is such an achingly gorgeous film - I'm glad you finally wrote about it! Great site by the way. I've been following it for a couple of years now.

Apertureparty, I haven't read the monograph, but thanks for tipping me off to it. I'll have to get it from a library or something. I'm not sure if the whole dream reading really adds much to the film's power. That it's a real person's real psychology is crucial. But I'll have to see how he makes his argument.

And thanks for following the blog! Feel free to comment whenever.