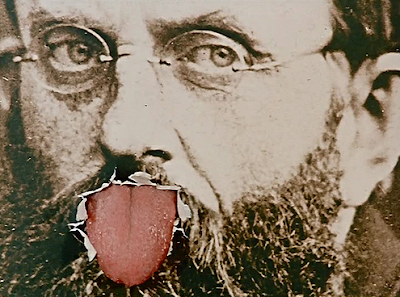 The Conformist (1970): I'm not one to obsessively justify the psychological, thematic, or narrative roles of images in a film, but if The Conformist is going to be the requisite love affair movie for cinematography students, it ought to have more purpose behind its visual choices. Sure, one can say that Storaro's noirish slashes of light play into the emotional turbulence of Jean-Louis Trintignant's character, just like the proliferation of sharp compositional lines or the one strange episode of dutch angles all do, but these semantics are too vague to have real visceral power. More often Bertolucci seems to just be toying with the image's expressive qualities, having a field day with camera movement, fog, filters, and vibrant gels even when these elements are noticeably gratuitous. I'm aware that it sounds ridiculous to gripe about filmmakers taking full advantage of a visual medium, but cinema is more than just visual fluff. It's about the way images are combined and sometimes connected with sound, the way this relationship also has a dialogue with the objects or subjects being photographed, etc., all of which contributes to the soul of a work. The Conformist feels damn near soulless to me.

Ashes (2012): Commissioned by Mubi.com and Lomography to make a short film utilizing the new LomoKino camera (a relatively inexpensive 35mm camcorder), Apichatpong Weerasethakul churned out one of the most unconventional advertisements for a product ever made with Ashes, a work that pushes his already intensely personal cinema to a more intimate place than before. The film is shot mostly around the filmmaker's country home, capturing casual episodes from the flow of daily life. As usual with Weerasethakul, the film's sound design is dense and rich, a tapestry of field recordings and low-key folk music juxtaposed with sequences of total silence. With the added haze of the LomoKino's images, as well as the stutter of the camera's low frame-rate, daily life is rendered ethereal and abstract, yet it also possesses the nature of a photo album flipped through frenetically in time, like a revved-up La Jetee. Unexpectedly, Ashes shifts into lo-fi digital footage towards its conclusion in a mesmerizing sequence of fire, sparks, and camera-phone-ready onlookers. (What it is exactly that we're looking at never became clear to me, but its mystery opens up precisely the zone of dreaming, contemplating, and recollecting that Weerasethakul encourages.) Nudging celluloid and digital up against each other is an extension of Weerasethakul's recent curiosity over the future of cinema, and further viewing of this ambient autobiographical sketch may yield the kind of multilayered rewards offered up by his prior two shorts, A Letter to Uncle Boonmee and Phantoms of Nabua. Watch it here.

Gregory Crewdson: Brief Encounters (2012): I went into Ben Shapiro's documentary on renowned photographer Gregory Crewdson hoping to get some kind of hint of a future film from the master chronicler of American suburbia, but to no avail. In fact, I got quite the opposite. I've come away convinced that Crewdson's fascination with revealing narratives of immense emotional depth through single images is humbling, inspiring, and essential. If you're unfamiliar with Crewdson's work, the dude distills elements of working-class realism, Hollywood melodrama, and sci-fi into evocative large-scale portraits of small-town life that are equal parts David Lynch, Douglas Sirk, Jacques Tati, and Roy Andersson (though the mysterious beauty of his photographs is uniquely his...yada yada yada). Most interestingly, one would be hard-pressed to discern the difference between a Hollywood movie set and the set for one of Crewdson's single stills, as both involve elaborate logistical planning, a director of photography, high-powered lights, a large crew, and the whole nine yards. Shapiro shot the film over the ten years or so it took Crewdson to shoot his consummate photography series "Beneath the Roses," and the results, mostly on handheld digital camera, are remarkably intimate. The film's finest achievement is the way it captures every precise step in the artistic process, as well as how it makes all the madness and obsession that goes into production seem utterly ordinary.

Street of Crocodiles (1987): Twenty minutes of extraordinarily tantalizing science-fiction/horror atmosphere from the Quay Brothers. Seen on 16mm, this stop-motion animation has an incredible richness to its dusty imagery of a deserted, industrialized city as foreboding as that of Eraserhead. In this world of cobwebs, machines, and shadows, a slender man with sharp, exaggerated features bears witness to the enigmatic puzzles of a gang of puppet figures. It's all a pitch-dark vision of the collapse of a civilization, where no image is bereft of metaphorical import: unhinging nails as indicators of eroding societal foundations, puppets as surrogates for a dehumanized community). This is a murky, unsettling trip, a compact genre film that is unsurpassed in its total commitment to a mood of darkness and filth.

Jabberwocky (1971): Stemming from the same world of inventive pre-digital animation but on the other end of the emotional spectrum, Jan Svankmajer's Jabberwocky is a work exuding buoyancy, irreverence, and absurd humor. Freely inspired by Lewis Carroll's nonsense poem, the film taps into eternal toddlerhood, with Svankmajer finding a toy-box of trinkets to incorporate in complex animated maneuvers around a static bedroom tableau. Army figurines march in formation then get swallowed up by a sliding baby doll, sharp knives pirouette around a table, shell-filled jars spontaneously materialize, a tongue protrudes from the picture in the wall, and, over and over, a live action shot of a black kitten knocking things over and licking its chops intersperses the tightly ordered mayhem. Svankmajer's logic is at its most outlandish (intentions of Freudian psychology are too opaque to register at first glance), but his involvement of a gorgeously batty score by Zdenek Liska lends the chaos a precise musicality, a sense of virtuosic orchestration. A domestic dream exploded into the furthest reaches of the childhood imagination. Watch it here.

Agreed on The Conformist. It is further evidence of Bertolucci being one of the most overrated directors of all time, IMO. He mostly made derivitive, empty films like this.

I'm with you guys on The Conformist too. I rewatched it a couple of months ago and I think you sum it all up here really well--it's more like a succession of images then a movie, and it's almost as if theres no glue holding its basic components together.

I expected my thoughts on The Conformist to stir up some kind of reaction, but I didn't expect agreement. Jon, I don't think this one is entirely empty (although hearing Bertolucci speak vaguely about the themes of "lightness" and "darkness" certainly makes it seem like it is). Trintignant's performance seems to suggest shades of complexity that Bertolucci keeps tying up in cinematographic knots. But derivative it is.