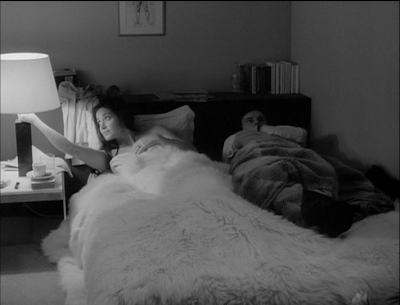 My Night at Maud's is simultaneously one of the most accessible and thorniest of Eric Rohmer's Six Moral Tales, exploring as it does the diverse philosophical terrain of a simple bourgeois love triangle. The film is marked by a ruthlessly droll and de-romanticized adherence to the romantic ideal that we are all meant for certain types of people, and fate will inevitably lead us to them. Jean-Louis (Jean-Louis Trintignant), a self-professed Catholic and lover of mathematics, is fond of such a model, and discredits entirely the role of spontaneity. Maud (Françoise Fabian), on the other hand, the sophisticated and proudly atheist brunette friend of Jean-Louis' old academic pal Vidal (Antoine Vitez), does not succumb to the idea that there is any predetermined plan for her life and conducts her behavior accordingly. Despite the inherent contradictions in their personalities, Jean-Louis and Maud discover conversational chemistry in the film's centerpiece, a long scene in which the two men visit Maud for a dinner that gradually becomes a soul-bearing evening of talk. As a result, Maud slowly becomes Jean-Louis' project in the same sense that the many men of Rohmer's Moral Tales settle upon a woman to distract them from their more stable lovers and proceed to dissect the every move of said female. But unlike these other characters, Jean-Louis does not possess any flesh-and-blood lover as much as an ideal object - a blonde woman named Françoise (Marie-Christine Barrault) that he glimpses regularly at church.

At the core of the film are the concepts of Blaise Pascal, the Catholic French philosopher and mathematician whom Jean-Louis, Vidal, and Maud tirelessly discuss. Pascal's Wager, a much-debated philosophical proposition that states that the logical man should obey faith and reject nihilism because there is nothing to lose and everything (salvation, grace, etc.) to gain, becomes a central talking point for Jean-Louis and Vidal when they reunite in Clermont towards the beginning of the film. As is characteristic of Rohmer, intellectual discussions such as these always mask more immediate thought processes and crises in the lives of his characters, and in Jean-Louis' case, the Wager becomes as much about his own romantic pursuits as it is about religion. If the odds of Jean-Louis' perfect mate existing are 1000 to 1, for instance, then he is resolutely set upon following that single possibility at the behest of all other options, and despite his dismissal of Pascal as too severe in his Catholic faith and reasoning, he obliges by the same principle in his search for a partner. Maud - the most knowable of Rohmer's many mysterious female specimens, and indeed one who presents a kind of moral and philosophical grounding in the film - sees right through Jean-Louis' intrinsic hypocrisy, yet searches for a human core to him regardless. In a subtle twist on the established convention of the Moral Tales, it is the female who orchestrates a greater portion of the scheming and manipulation, and Rohmer's biting dialogue (more linear and coherent than the digressive bouts of La Collectionneuse, for instance) keeps the audience especially alert to the fact that she is always a step ahead of Jean-Louis.

This conversational sparring is on greatest display in the titular event, which comprises a significant chunk of the film's running time. Vidal, clearly in love with Maud, has too many drinks at dinner and quickly proves the joke of the evening, while Jean-Louis follows not far behind, voicing his newfound Catholic values to unanimous skepticism and contrasting the casual sensuality of Maud with his comparatively rigid social behavior. Lofty hypothetical questions pepper the discussion and reveal dialectical attitudes towards love, faith and reason, and fate and free-will. Yet these men who are deeply concerned with intellect (much of their action involves discussing books and scanning books) have difficulty discerning and acting upon the underlying subtexts of a social scenario. Maud represents the opposite, and her skill in manipulating Jean-Louis' pretenses comes to the fore in a moment shortly after Vidal leaves the apartment. Jean-Louis tries to leave but she asks him to stay. He doubts her and questions her seriousness. In slight irritation, she tells him to leave if he wants. He gestures awkwardly towards the door. He finds an excuse to sit back down on the couch, and she insists that if she wanted him to leave that she'd tell him. It's a familiar exchange between a man and a woman tentatively pursuing romance, yet so much brews beneath the loaded silences, his petty justifications and her confident declarations. The entire sequence - remarkably well acted, staged (a nightgown-clad Maud lies down in bed about halfway through, at once tempting and quizzing the men), and paced - dissects Jean-Louis' obvious hypocrisies, the emptiness of his alleged moral chastity, and the damaging politeness of his demeanor. 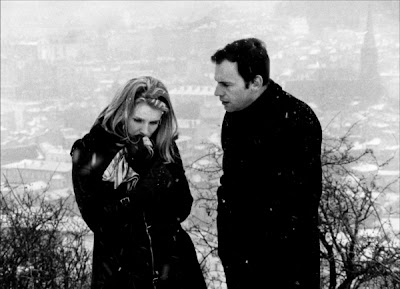 When the night turns intimate for Jean-Louis and Maud, he is unable to consummate a clear instinctual affection towards her. Upon kissing her, he turns away, scoffing at his own betrayal of desire for Françoise. Jean-Louis' conception of fate is strangely skewed, as it seems like he subconsciously guides his own life to realize his own desires, writing off the result as fate. Chance and happenstance play pivotal roles in the progress of the narrative: Jean-Louis randomly meets his old friend who takes him to Maud's, he finds himself sleeping there through a combination of snowy weather and Vidal's drunkenness, he stumbles upon Françoise while driving through town and subsequently is forced to stay the night at her place when an icy street thwarts his car's momentum, and he crosses paths with Maud while vacationing with Françoise (now his wife) in the brief epilogue. Yet Jean-Louis only takes full advantage of these unforeseen circumstances when they comply with the vision he has for his life (and which Maud so astutely mocks, continually calling out his single-minded fascination with blondes and Catholics). His moral code has mandated that he experiences life in one specific way, and that all spontaneous endeavors that could lead to perhaps better options (the chemistry he shares with Maud, for instance, unquestionably surpasses that which he shares with Françoise) are snuffed out.

Rohmer and his regular cinematographer Nestor Almendros subtly present the film through Jean-Louis' strict perspective. (Travelling shots from his car window proliferate and gently underline this idea.) Whereas Maud's inner-city apartment is seen as a flat, drably bourgeois space (with grey as the dominating shade), Françoise's outer-city residence is contrasted, with its heavenly white lighting and cozy vibe, as some kind of exotic escape despite the lesser amenities. The sadness here is that Jean-Louis' wooing of Françoise seems more of a contrivance and a resignation than the product of a genuine longing and love (though it may become that). This is perhaps illuminated to him in the film's wonderfully ambiguous epilogue, which juxtaposes a fully realized, unified vision of his hopes and dreams with an unexpected recall of the past. Jean-Louis pauses in mid-sentence when describing the chance meeting between him and Maud on a sunny beach, and a narration recites his jumbled thoughts during the pregnant silence. Both Jean-Louis and Françoise shrug off the encounter, but there is nonetheless an impression of regret, confusion, or uncertainty implanted in the pause. The final image of the married couple and their young boy running off towards the waves, deliberately romantic in its symmetrical composition and hazy late afternoon light, is not without a tinge of irony, a typically Rohmerian suggestion that the moral code so rigidly followed by the protagonist may be as much a curse as a blessing.
Posted by Carson Lund at 3:42 PM

Great piece, Carson, about Rohmer's best-known film. It's a great one indeed, particularly for the very ambiguous way that it treats these characters, plus the gorgeous b&w cinematography. Jean-Louis lives his life by the kind of chilly logic that Pascal brings to religion with his infamous wager, which reduces the mysteries of faith and spirituality to a coin flip. Similarly, Jean-Louis is unwilling to give in to the sensual magic and immediacy of Maud, preferring to adhere to the ill-defined but still rigorous moral code he's set for himself.

Pascal's Wager reappears, in a much rosier light, as a callback to this film, in Rohmer's later A Winter's Tale, with the twist that this time it's the woman making the wager, adhering to her internal code, but Rohmer seems much more admiring of her rigidity than he is of Jean-Louis'. He's much more forgiving and sympathetic towards his female characters in general - perhaps because in some ways he's like Jean-Louis, idealizing these women.

Thanks, Ed. Rohmer's always a nonjudgmental onlooker, which is why I love his work so much. This is a particularly ambiguous film in the series, largely because of the fact that Jean-Louis is both happy and unhappy, a female predator and a really sincere, sympathetic guy, sure of himself and yet deeply conflicted. You're right that Rohmer is probably in a somewhat similar boat. I think he doesn't quite understand the complexities of women (who does?), and so instead of feigning knowledge he creates male characters who have the same vantage point and then observes, somewhat skeptically, as they treat these women as puzzles to be solved.

I haven't seen A Winter's Tale yet, but I have read that it also uses Pascal's Wager. I've really latched onto Rohmer in the past year. And I still can't fathom how some call him visually inept.

this review is what happens when a rich layered art work is analyzed by a narrow minded bigot.
you find a particular pov and a heroine and a villain (or at least a hypocrite) according to your moral code and then review the movie in black and white simplistic terms ignoring all evidence contrary to your pov.

rohmer's best movies(this is one) are not that simplistic and certainly not judgmental. you nominally agree on his being nonjudgmental, but your review is based on a particular judgmental reading of the movie.
btw when he do get judgmental in some other (lessor)movies, he has a quite a different pov than yours.

I'm not going to engage your criticism if you refuse to detail what constitutes my alleged "bigotry."

I always strive for openness and honesty in my writing. I think I'm quite fair in this review.