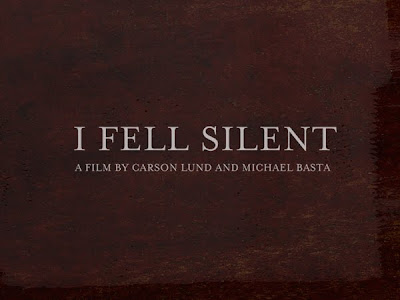 For those readers who are unaware (which is probably all of you), I'm a filmmaker as well as a critic. I've made a whole bunch of short films in the past that are usually co-directed with a lifelong friend of mine named Michael Basta. A few of our collaborations can be found online (see: Wind Through the Cradle, Remedy in Phrases, or Bardo, among others that are floating around on the web.)

We're currently working on a new film called I Fell Silent, which is a dreamy horror/coming-of-age film in the stylistic vein of Claire Denis, Pedro Costa, Carlos Saura, Hou Hsiao-Hsien and Ingmar Bergman. The film will focus on the quotidian life of a young boy who dwells in a large mansion with his mother and grandmother, a home that has been passed down through family history. Part of the idea is to take some of the conventions of the horror genre and approach them from a strange angle, to render the "horror" - which is relatively mundane and universal to childhood - somewhat peripheral to the expression of a child gradually grasping at the broader world around him. It's a fairly autobiographical film, and it will be shot in my hometown of Nashua, NH.

I Fell Silent is definitely our largest production yet, and therefore we have had to reach out to our respective circles of family, friends, and colleagues in search of the funds to get the project off the ground. There is a Kickstarter page set up currently that is scheduled to hit a funding deadline of February 24th. If we do not reach our funding goal by then, the film will not be produced. Searching for donations is never an easy (or comfortable) thing to do, but in this case it's totally necessary. If you take a look at our page and have interest in the project, any contribution is hugely appreciated. We're getting closer and closer to our goal every day, and having devoted so much time and thought to this production thus far, we are sure we will deliver a strong final product. Also, there are great rewards!
Posted by Carson Lund at 11:36 AM