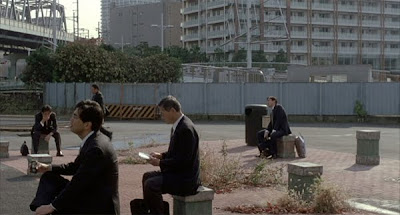 Tokyo Sonata (2008): That so much of this film is eloquent, clever, and lovely makes its bombastic third-act derailing all the more disheartening. Kiyoshi Kurosawa manages at times to have an extremely light, yet gently unsettling touch, a tonal ambiguity that renders contemporary Japan simultaneously comforting, mundane, threatening, and otherworldly. His direction is supremely economical; like the best of Ozu, he chooses the ideal spot for his camera in a domestic space and lets action play out on several planes. The drama here is typically quotidian but also suggests life out of sync, the way every day would occur if the Earth were tilted slightly off axis. Kurosawa's premise speaks to that instability: a Japanese family unit is pulled apart by a father's sudden unemployment and two sons' desires to ignore their parents' conservative leanings by learning piano and heading to war, respectively. The film is riffing on classic Japanese concerns of tradition vs. modernity and the decline of filial piety, but its third act feels so overwrought because it leans too heavily into the melodrama bubbling beneath those themes. Still, a highly promising and engaging feature.

Last Life in the Universe (2003): In some circles, Pen-Ek Ratanaruang has been referred to as being among the crop of "contemplative" filmmakers that have arisen in the past decade. But judging by Last Life in the Universe, he couldn't seem further removed from the aesthetic disciplines of directors like Tsai Ming-Liang and Lisandro Alonso. Though it appears rather glum and controlled on the surface, the film is defined by the feeling of almost bursting apart constantly with the desire to conform to genre codes. Among the motifs Ratanaruang flirts with: the sad romance film as practiced by American Beauty, the road movie without a specific goal, and the punchy, silly gangster film. With a quiet, free-floating protagonist, a thinly sketched quasi-romantic interest, and a dead-serious Takashi Miike disguised as a mobster, Last Life in the Universe verges on being goalless, dropping its greatest strengths just as they start to accumulate into something meaningful to meander on gratuitous subplots. The film's central performances hold the attention, but Ratanaruang's flickers of visual invention and dramatic skill aren't enough to make it very substantial.

Paprika (2006): As far as wacky, off-the-wall surrealist visions go, this is pretty bottom-of-the-barrel. Emptily postmodern, mind-numbingly winky, and just plain unimaginative, Paprika's proto-Inception construction (yo, what if we go inside someone's dreams and just keep going, and the layers keep building, man?) takes it through a barrage of amateurish dream imagery and half-baked 21st century talking points (virtuality, globalization, technological progress, and the dissolving boundaries they create) en route to some gnarly animated spectacle: curious Big Man Japan omens and Miyazaki hodgepodges galore. The film approximates the trigger-happy fanboy sufficiently, but its aspirations to the zeitgeist are pretty laughable. Perhaps if Satoshi Kon dropped the conceptual gimmicks altogether and just let his visual sensibility run wild...well, that still wouldn't make him a good filmmaker.

Crimes and Misdemeanors (1989): As Cliff Stern - a world-weary documentary filmmaker trudging his way through a dour gig constructing what is ostensibly a deified portrait of shamelessly big-headed television producer Lester (Alan Alda) - Allen is operating as a subtle variation of his familiar type here; he's often feeling too defeated to toss around one-liners hastily, and he's too sensitive to let his big personality explode to the surface all the time. As a result, it's a moving, unpredictable performance that feels shortchanged whenever the film obeys its rigid structural conceit to follow the story of Judah Rosenthal (Martin Landau). Both men are dealing with marital apathy in very serious ways, but Landau is no Allen, and the film's even division between the two performers is a detriment to its own sense of propulsion. I like the ambition of Crimes and Misdemeanors, Allen's willingness to tackle so directly the value of ethics and spirituality in a crumbling social landscape, but a simple close-up of Allen's uncharacteristically wrenching expression of sadness and defeat upon losing his lover towards the end of the film says more about this issue than any of the film's larger designs could.

The Big Chill (1983): The Big Chill has the ensemble precision of a great Linklater and the stylistic nonchalance of a late Ford. It's a very warm, loving film, all about the euphoria one feels when meeting up with a bunch of old friends, and equally about the regrets and bitterness that can rise to surface in such a scenario. One senses that these actors have brought a significant amount of personal passion to the project, filtering their own life dramas through their characters without descending into sentimentality. Moreover, it's a very American film, treating companionship, heartache, desire, and loss through a multitude of specific pop-cultural tropes: The Band, University of Michigan football, an old television show that's meant to evoke Baywatch, etc. I briefly considered revealing my 2011 top ten list through ideal double feature possibilities, and this would have fit nicely alongside Putty Hill; both films illuminate the positivity that can spring from devastating loss, and their greatest features are their denials of easy message-making.

Ring (2007): Experimental filmmaker Robert Todd refracts the lazy mid-afternoon stillness of an urban playground through double and triple exposures, macro lenses, and high-contrast film stock and stumbles upon some sublime imagery in the 12-minute Ring. In one instance, two shots of blurred undergrowth - one tilting up and one tilting down - are layered atop one another to create a mysterious visual illusion of perpetual motion, the direction of which ceases to matter. It's fitting, because the film's elegant capturing of mood distills the space into an abstract zone where time and space are negligible. This is the definitive cinematic expression of the feeling of being in a park on a quiet afternoon.

Starsky and Hutch (2004): Two or three funny jokes (the "do it" scene really stands out), an outrageous cameo or impersonation here and there (Snoop, I'm looking at you, though you did a fine job), and an insultingly generic/lunatic Asian supporting male doesn't make a good movie. Todd Phillips (unthinking perpetrator of aforementioned qualities), take note.
Posted by Carson Lund at 5:13 PM